LOUISVILLE, Kentucky — The Kentucky Derby’s long history of being a difficult race to handicap but a tantalizing one to bet can lend itself to a lot of overthinking. In each of the last five years, the winner has more or less been staring us in the face — a frustrating proposition for wiseguys and casual horseplayers alike as betting the favorite in a race like the Derby offers both less value and, frankly, less fun.

But if there’s a silver lining in Omaha Beach being scratched from the race on Wednesday evening due to an entrapped epiglottis, it’s this: The wide-open Kentucky Derby suddenly looks like an incredible race to bet.

“Omaha Beach was definitely the horse to beat,” said Bob Baffert, who has won it five times. “I don’t think there’s a heavy duty favorite now. They’re all so close.”

Though someone will technically go off as the betting favorite Saturday — maybe Baffert’s Game Winner, who was readjusted to 9-to-2 on the morning line — there really is no favorite now. And that means opportunity to make big money for anyone who can analyze this race correctly.

But unlike recent winners like Justify and Nyquist, who went off as short-price favorites, it’s entirely possible that this year the best horse is hiding in plain sight.

Maximum Security, who is 4-for-4 in his career, was listed as an 8-to-1 fourth choice when the new morning line came out Wednesday night but has been largely overlooked in the week-long build-up to the Derby. That’s not a surprise.

Until Maximum Security won the Florida Derby by a commanding 3 1/2 lengths on March 30, he hadn’t been seriously considered as a Kentucky Derby prospect by anyone, including his connections. In fact, trainer Jason Servis thought so little of the horse last December before his debut that he ran him in a $16,000 maiden claiming race — essentially, a race where anyone could have “claimed” the horse for $16,000 — because he didn’t think the horse was attractive enough for anyone to buy.

“He wasn’t showing a lot in the morning, and it was the end of the year,” Servis said. “The (mother) sold for $11,000 and the brother was running for cheap. I had an apprentice on him. The Kentucky Derby was the furthest thing from our mind.”

But when he got his shot, Maximum Security delivered. Though he was obviously facing inferior competition, he won three sprint races by a combined 34 1/2 lengths. Then in the Florida Derby, jockey Luis Saez sent him to the lead, controlled the pace with a soft 48.98-second opening half-mile and kicked away from the field entering the far turn to cruise home.

A ton of factors make Maximum Security the race’s biggest mystery. Not only is it unlikely he’ll get the same uncontested pace scenario he got at Gulfstream Park, but his preparation has been unconventional with a series of slow workouts coming into this race (his workouts before the Florida Derby were also slow). A seasoned observer would note that Maximum Security is not the prettiest mover, either, when he gallops in the morning.

But here’s what I keep coming back to: With Omaha Beach’s defection, Maximum Security is the only horse in the field to run a triple-digit Beyer Speed Figure. And he’s done it twice, clocking a 101 in the Florida Derby and a 100 in his conditional allowance race before that.

The Beyer figure is just one of many handicapping tools out there, but has been a gold standard for measuring how fast horses have run in the past. And Maximum Security, who drew post No. 7 and should be on or near the early lead, appears to be the fastest horse in the race. 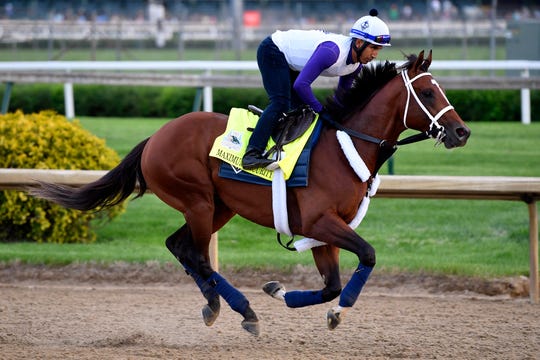 A number of others certainly can win Saturday.

Tacitus is regally bred, trained by a master in Bill Mott and closed stoutly to win both the Tampa Bay Derby and Wood Memorial. His running style may lend itself to traffic trouble, but he’s certainly good enough.

By My Standards, who won the Louisiana Derby, has caught the attention of insiders with his work in the mornings. He has the look of a horse that is steadily improving and sitting on a big race at a decent price.

Though Game Winner looks like a horse who may have matured before his peers at age 2 and leveled off at 3, it would be surprising if he’s not in the mix turning for home. Improbable comes with solid credentials, though there’s some question about whether he wants the distance. And Roadster, who won the Santa Anita Derby, is the horse Baffert noted during an impromptu interview with TMZ last summer when asked who might be his next American Pharoah or Justify. That says a lot about the kind of talent he might possess.

Even some big-priced longshots in here like Tax and War of Will have shown enough in their past performances to suggest that they belong with this field — and could absolutely win the race if they improve just a fraction.

But Maximum Security has both the speed figures and the right running style to make him the pick here, and if he can win, we’ll be hunting for a big payout. That means keying him on top and bottom in exactas with all the horses mentioned above and using him on top in trifectas adding a couple more longshots in Win Win Win and Cutting Humor to get into that third spot.

After six straight Derby favorites winning, it feels like this is a prime opportunity to take a horse at a bit of a price. Given how wide open this race appears, Maximum Security makes as much sense as anyone to get the roses Saturday.