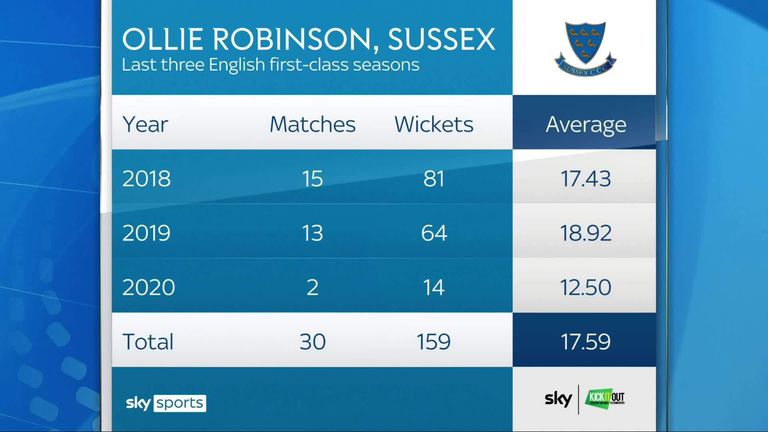 Nasser Hussain has picked out Ollie Robinson as ‘one to watch’ during the 2021 cricketing summer, suggesting that England recognition might be on the cards for the Sussex seamer.

The 27-year-old has been called up to the England Test ‘bubble’ on more than one occasion over the last 12 months, reward for his consistent county performances which have seen him claim 159 wickets in 30 matches, at an average of 17.59, over the past three seasons.

Robinson is currently in action for Sussex against Lancashire during the opening round of the County Championship.

“His stats in the last three years are phenomenal – he’s not just a one-season wonder,” Hussain said on The Cricket Show this week – which you can listen to as a podcast in the player below.

“He’s a bit of an English-type, tall, hit-the-deck bowler. He gets his wickets at around 17 apiece – and on good pitches.

“He has been in the bubble with England quite a few times now, but just can’t quite burst into that side because of the excellence of [Jofra] Archer, [Stuart] Broad, [James] Anderson, [Chris] Woakes etc.

“[Former coach] Jason Gillespie did a nice article on him, talking about him and how he had improved since moving from Yorkshire. He went down to Sussex and hasn’t looked back since really.

“Is he quick enough? I reckon he is and, with an Ashes tour coming up, I think he’ll be looking to get into that England side – because his stats and wicket-taking potential in county cricket has been phenomenal.”

Fellow former England cricketer, Mark Butcher, a guest on this week’s Hussain and Key Cricket Show, added that Robinson had been working hard to improve his fitness over the winter with the aim of breaking into the Test fold.

“I saw Ollie quite a bit during the winter; the one observation I made from afar was he looked very different to all of the other ‘animals’ in the England side,” Butcher added.

“What I mean by that is, he looked more Angus Fraser than Ben Stokes. He was slightly heavier, didn’t move in quite as athletic a way as the modern player. He is definitely a throwback in that regard.

“England have worked very hard on his fitness, his strength and conditioning, just to give him an idea of ‘this is what you’ve done at county level, but this is a different animal altogether’.

“Having that time with England, albeit not playing, will have done him the world of good – just seeing how the likes of Broad, Anderson and co prepare, seeing the physical demands of Test match cricket and how much fitter, stronger, athletic, flexible you need to be in order to have a long and lasting career should you break into that England side.”

Butcher also singled out a couple of batting talents to keep an eye on during the 2021 county season, including 20-year-old Jamie Smith from his former county Surrey.

“He is very talented, highly precocious,” Butcher said of Smith. “I remember getting a phone call from Ian Chappell no less, saying that he’d seen Jamie play grade cricket in Australia and thought he was potentially a world-beater – that is a pretty good endorsement.

“There are a couple of other young batters around as well. Tom Lammonby, from Somerset, looks a really good prospect.

“Or Haseeb Hameed, at Nottinghamshire. I mean, for goodness sake, when is that lad going to turn his undoubted ability into runs?

“There will be top-order players breathing down the necks of England’s top three, and Rory Burns in particular.

“I mention Burns there; I imagine that come Test-match time, England will keep two out of the three guys that they’ve got in the top order at the moment.

“The two, I think, for definite are Dom Sibley and Zak Crawley (at No 3). Burns will need to score heavily to remind everybody that he was the man that had been in possession before his ankle injury, otherwise the likes of a Lammonby perhaps come in.”

Doonside Cup preview: Racecard, analysis and tips for the feature at Ayr on Thursday