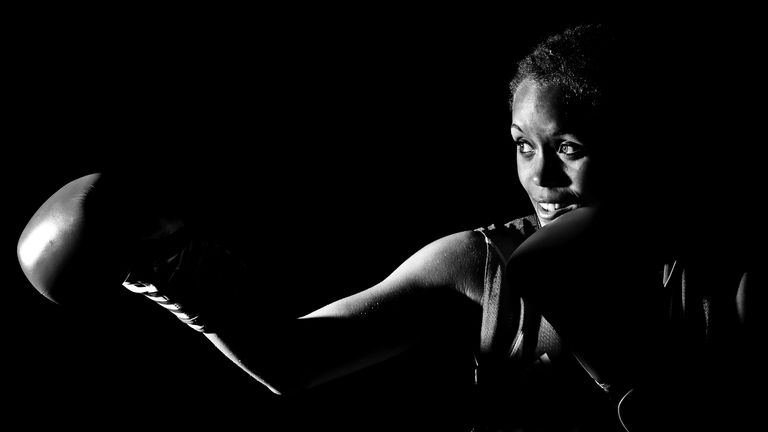 In the latest episode of the Sky Sports docuseries Driving Force, Natasha Jonas discusses how sport shaped her as a young girl, how she lost her identity when it was taken away and how she became the athlete and woman she is today.

Across the series, professional athletes from different sports discuss how they made it and unveil all of the different aspects of their chosen professions.

In this episode, Jonas discusses the ups and downs of a sporting career which started away from the boxing ring, and shares her hopes for the future of women’s boxing.

From a very young age, it was clear sport was going to be a huge part of Jonas’ life.

As part of a ‘massive family’, she jokes people in the Toxteth area used to know that more Jonases would be on the way each year, as she always had siblings and family members around her.

“A lot of us lived in my nan’s house, I had two older [boy] cousins who lived with me,” she told Judy Murray at the start of the episode.

“Being around them, mean that I got into the things they did. From riding bikes to playing football and climbing trees, wherever they went, I could go and they had to take me with them. So, we were always together and we were always playing.”

As many athletes will tell you, they vividly remember the first time they laid their eyes on major sporting events and the impact that moment had on them. For Jonas, this was the Olympic Games and the experience came at the tender age of just four.

“I remember the first time that I ever watched the Olympic Games was in 1988. I was fascinated by all of the sport that was going on during this one television programme and I said to my mum that I wanted to be there.” In Toxteth, every member of the Jonas family learned karate and as a young girl, she used to join her dad at his boxing gym, despite no other girls being allowed in or being allowed to enter the ring.

“I just remember any sport in which I could be competitive and could potentially win at, I had a go at.”

It was football which turned out to be Jonas’ first true sporting love and she realised in order to be “taken seriously” by the boys, she needed to work harder than them.

“You had to be that bit better to be accepted. It would always be the case that I was chosen last because I was a girl…

“But, a year later when I’d been playing competitively with the lads and I’d improved a lot quicker [than them], I started getting selected.” Within the sporting world, Jonas was hugely talented and confident. However, the same could not be said for her feelings within a classroom environment at school.

“Throughout school, I had struggled academically and by the time I went to senior school at the age of 11, I had the reading age of a nine-year-old.

“I had moved to a totally different area; I was totally out of my comfort zone and the one thing that I still loved and did was sport.

“It was my salvation to combat the loneliness and that I could not do the schoolwork. My escapism was that I was still good at sport and I was recognised for that.”

With her natural talent, Jonas was a member of every sports team and wanted to be captain at Weatherhead High School. But, Mandy Moretta, her PE teacher, gave her an ultimatum; improve off the field or you will not be given that chance on it.

“I felt like it was a bit of threat, she was trying to take away from me the one thing that I wanted, which was to be the captain.”

Moretta ended up having a conversation with a young Natasha about leadership and explaining she was not able to be captain due to the way she was behaving around the school.

“I said to her that captains have leadership roles and skills, which they demonstrate at all times,” Moretta said.

Jonas remembers the conversation well. She recalled it hurt her more than any detention and she realised she was letting people down.

Ultimately it was that conversation and those feelings, which caused a change in Jonas’ behaviour and she trusted in Moretta to ask for academic help.

“When I talk to kids in school now, I tell them about her because she was really instrumental in changing my life,” Jonas said. “It just took one person and one teacher.”

After continuing to excel at her first sporting love, playing for Liverpool Ladies and gaining an England call-up, Jonas was offered a soccer scholarship in the USA.

“At the time, I was a kid who had barely been on holiday,” she said.

“So, the opportunity to go and play the sport that I loved [in the USA] was incredible. I’d been inspired by watching Mia Hamm and as I young player, I thought I was better than her and she was a mega-star!

@JudyMurray certainly does pack a punch but tonight it's my turn. The story of the girl behind the mother, athlete and woman I am today! @SkySports 9pm @DrivingForce20 #WomenInSport #WomenInBoxing #Boxing ⚽️🥊🥇🏅🏆 pic.twitter.com/DFjGsT5d00

“I thought, if I could get to America I’d be seen and I’d be on a team. I didn’t go there for the academic side, I went to be a sports athlete and superstar.

“Then, I’m playing a game and one bad tackle ended it all. I stayed in the hospital overnight and I knew that the doctor was going to say something awful.”

Jonas’ premonition was right because the news came that next morning that she was not ever going to be able to play football again.

“It was like the whole world had just come crashing down,” she said.

“It was tough and because that ‘athlete’ tag was taken away, I felt like I’d lost my identity and I decided to come home. I felt like I’d let everyone down as I came back without a degree and without my sport. I fell into a rut.

“I was 20-years-old and thought that if I was going to be a sports star, it would have already happened. So, for the first time in my life, I decided that I was done with sport.”

As the episode of Driving Force carries on, Jonas explains to Murray how she managed that challenging period and how she re-found herself and created a new, and hugely successful, career in the world of boxing.

Watch the full episode of Driving Force with Natasha Jonas at 9:30pm on Sky Sports Mix. It will also be available On Demand via Sky and NOW TV.