“Who is Merv Hughes?” a few millennials were heard to ask this week when the former Australian fast bowler was inducted into the Australian Cricket Hall of Fame.

Ah, you young ’uns, gather in close, while we old-timers tell you about him. To understand the whole Merv Hughes thing, you need to go beyond the wickets taken, the catches held, the runs scored – as impressive as they all were. You even need to go beyond his fabulous handlebar moustache, the generous nature and his role in so many famous cricket stories. 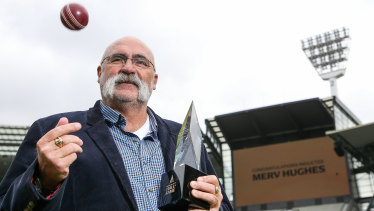 Merv Hughes has been inducted into the Australian Cricket Hall of Fame.Credit:Getty

(But, oh, alright, just one. Back in the early 1990s, see, the famous Pakistan batsman Javed Miandad was tonking Merv all over the park and after one particularly big hit, the uppity genius batsman said to Hughes, “Merv, you are a big, fat bus conductor”. A few balls later, Merv cleaned him up – Got him! Yes! – and his innings was over. As Miandad trudges off, Merv runs past him and puts out his hand: “Tickets please!” Miandad had the grace to laugh.)

No, the real thing about Merv Hughes was that he was the quintessential everyman.

See, when we watched Dennis Lillee run in with such superb athleticism, or gazed in awe at Dean Jones crack one through the covers, we never said, “I reckon I could do that”. For what those blokes did was other-worldly.

But with Merv Hughes? It was different.

Watch him now as he steams in from the Randwick end, huffing and puffing, his big tummy bouncing a little as he does so, only to unleash a thunderbolt, and keep going until he drops …

It is enormously impressive, but …

But, on a really good day, with the wind behind us, we could dream – just dream – that if things had gone our way, that might have been us instead of just the under 14 Ds, which is as close as we got.

But it wasn’t us. It was Merv, and he always looked like he loved it every bit as much as we would have, if we had been in his place. We loved him for it. And still do.

Good on you, Merv, and congratulations.

Thick as a board

Now, when it comes to the Folau comeback to the St George Illawarra Dragons madness of this week, no-one put it better than the redoubtable Ian Roberts, who asked the question that had to be asked.

“At what point did someone at the Dragons think it would be a good idea to invite this shit-storm into their club? You are welcoming this hurricane of offal . . . Who thought this was a good idea? It’s mind-blowing.”

Seriously, all we can know for sure is that in the St George Illawarra set-up there must have been a critical mass of mandarins who looked at the Bring Back Folau proposal and went, “Hmmmm, now THAT looks like a good idea! True, it may occasionally bump the St George Illawarra name off the back page in connection with Jack de Belin, and put us next to Israel Folau, but that will just be a nice change! And the sponsors will love the attendant publicity! I say we let our respected captain Cameron McInnes go – the one who has never caused us a damaging headline in his whole career – stay four-square with de Belin, and get Folau! All those in favour, say ’Aye.”

I am still gobsmacked at the sheer idiocy of it. For what happened – the outcry, the alarm of the sponsors, the buckling and the wild run for cover – was always going to happen. Not because of media loudmouths like me, but – happily – because of the mob, who have had enough. Despite the accusations that the Folau outcry is lead by the media, it ain’t. After the first Folau post, social media had exploded before we journos and broadcasters had got out of bed and put our shoes on. Ditto, the second post. The game has changed. And rugby league has changed. The idea that the same NRL crowd that so wonderfully embraced Macklemore singing Same Love at the 2017 grand final; and the same NRL administration that has a float in the Gay Mardi Gras, was going to go “Yeah, beauty, bring back Australia’s second-most famous homophobe,” is nothing short of ludicrous.

It was quite the reverse. When respected rugby league journalist Tony Adams put up a Twitter poll for his league followers on whether Folau should come back he got 6,000 responses, with 70 per cent of league followers saying “no”.

2GB’s Ray Hadley, who you’d reckon would be absolute dead centre of the league media was strong. 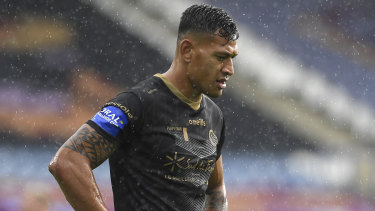 “This isn’t about freedom of speech. If I said on the radio what Israel said, I’d be sacked – and rightfully so,” he said. “Young people may be preparing to confront their family to say they’re homosexual. They shouldn’t be made to feel marginalised. You can’t vilify people because they are born a certain way.”

How the same mob at St George Illawarra who thought Folau was the answer to their woes is ever going to guide them out of their current woes is a very good question. Those who want to mount a coup on the board and administration will never have better ammunition, and never a better time to strike.

Despite all that, there are still dinosaurs out there who just don’t get it, who think that those who weren’t crazy on taking Folau back were “snowflakes,” just as there are those who bitterly criticised the fact that Collingwood itself commissioned the report into racism that came back with the devastating verdict.

Friends? It is actually the exact reverse. Holding on to toxic nonsense is what will send you broke. It is like this: All businesses that rely on the turnstiles swinging need the mob to keep coming in droves. To do that they need to be welcoming to people of all stripes, all ethnicities, all colours, all sexualities, all religions, abilities and genders.

And there is a wonderful symbiosis here.

See, it is just like the Landcare mob who have successfully made so many Australian farmers understand the truth – looking after their land with great environmental care doesn’t make them “greenies”. It makes them more money with land that is more productive for longer!

Media, meantime, has come to understand that toxic crap is more trouble than its worth. When 2GB got rid of Alan Jones last May, they doubled their revenue in a month!

And so the NRL embracing diversity doesn’t’ make them “snowflakes”, any more than Collingwood trying to get on top of endemic racism is anything other than an imperative. It puts them all squarely in the times they live in, and makes the people that make this happen and insist upon it, astute administrators.

2GB’s Ray Hadley on the Folau mess: “This isn’t about freedom of speech. If I said on the radio what Israel said, I’d be sacked – and rightfully so. Young people may be preparing to confront their family to say they’re homosexual. They shouldn’t be made to feel marginalised. You can’t vilify people because they are born a certain way.”

The redoubtable Willie Mason, appearing, Your Honour, for the accused: “I’ve been very loud about this – there’s some absolute pieces of shit playing our game, and then we get a bloke who quotes a fictional book and he gets ostracised and can’t play here. Come on, let’s just chill down a little bit…”

Magistrate Robert Rabbidge finding Sam Burgess guilty of intimidating his former father-in-law: “An enraged Sam Burgess would be a frightening figure for any Australian. I’ve found you guilty and I note you were going through a lot of agony and it wasn’t easy for you. This was a terrifying experience for Phoebe Burgess, and of course her dad in particular. I must record a conviction.” Burgess was given a two-year community corrections order.

Do Better Report look at racism at Collingwood: “Too often the reaction was defensive rather than proactive and this aggravated, rather than mitigated, the impact of that racism on the people who experienced it.“

Man in the middle, former Collingwood player, Heritier Lumumba on the Collingwood club’s reaction to the report: “It was painful to watch the club dig itself deeper into delusion and dishonesty at today’s press conference.”

Eddie McGuire apologising the day after the infamous Collingwood press conference: “Yesterday … in my opening, I got it wrong. I said it was a proud day for Collingwood, and I shouldn’t have. I did not mean we were proud of past incidents of racism and the hurt that it caused, I am not. It’s been interpreted widely that way and I regret that deeply.”

Nick Hockley, Cricket Australia’s interim CEO: “Due to the public health situation in South Africa, which includes a second wave and new variant of the virus, and following extensive due diligence with medical experts, it has become clear that travelling from Australia to South Africa at this current time poses an unacceptable level of health and safety risk to our players, support staff and the community.”

Tom Brady on how long he’ll keep playing for: “I think I’ll know when it’s time.”

Yoshiro Mori, the head of the Tokyo 2020 Olympics organising committee: “Women have a strong sense of rivalry. If one raises her hand to speak, all the others feel the need to speak, too. Everyone ends up saying something. If I say too much, the newspapers are going to write that I said bad things, but I heard somebody say that if we are to increase the number of female board members, we have to regulate speaking time to some extent, or else we’ll never be able to finish. I am not going to say who said that.” Don’t move. Don’t BLINK. She’s watching. Move on.

British athlete Dina Asher-Smith when asked if she’d take a knee: “As a black woman, I basically take a knee every day. I kind of stand up, am very authentic and proud of who I am and what I represent. By me excelling and being me in a sporting arena, that’s what I do. That’s what I represent when I stand on the line, you see me as a black woman in all my vibrancy and glory.”

Rugby Australia chair Hamish McClennan: “From a pure branding sense, within the world of rugby, the Springboks have dominant green, the All Blacks are all black. We’ve just been jumping all over the place. I felt we had to bring that sort of consistency to how we portray the jersey because when done well it is iconic. We are meant to be green and gold.”

Team of the Week

Patrick Reed. Golfer is busy making a rod for his back and in the future his play will be scrutinised unlike anybody else’s.

Rob Clarke. The interim RA CEO moved on, after doing a sterling job.

Tampa Bay Bucaneers and Kansas City Chiefs. Contesting Super Bowl LV, in Tampa. The big deal about it is that the Buccaneers have the 43-year-old Tom Brady at the helm, and after two decades of success with the Patriots, is being credited with turning them around. He is redefining “old”.

Sydney Sixers and Perth Scorchers. Contest the Big Bash Final on Saturday night. If they were playing it in my back yard, I would draw the curtains.

Sports news, results and expert commentary delivered straight to your inbox each weekday. Sign up here.

Best bets for the Memorial Tournament