Born in Masaya, Nicaragua, Mayorga was raised in poverty and a self-proclaimed gang leader. 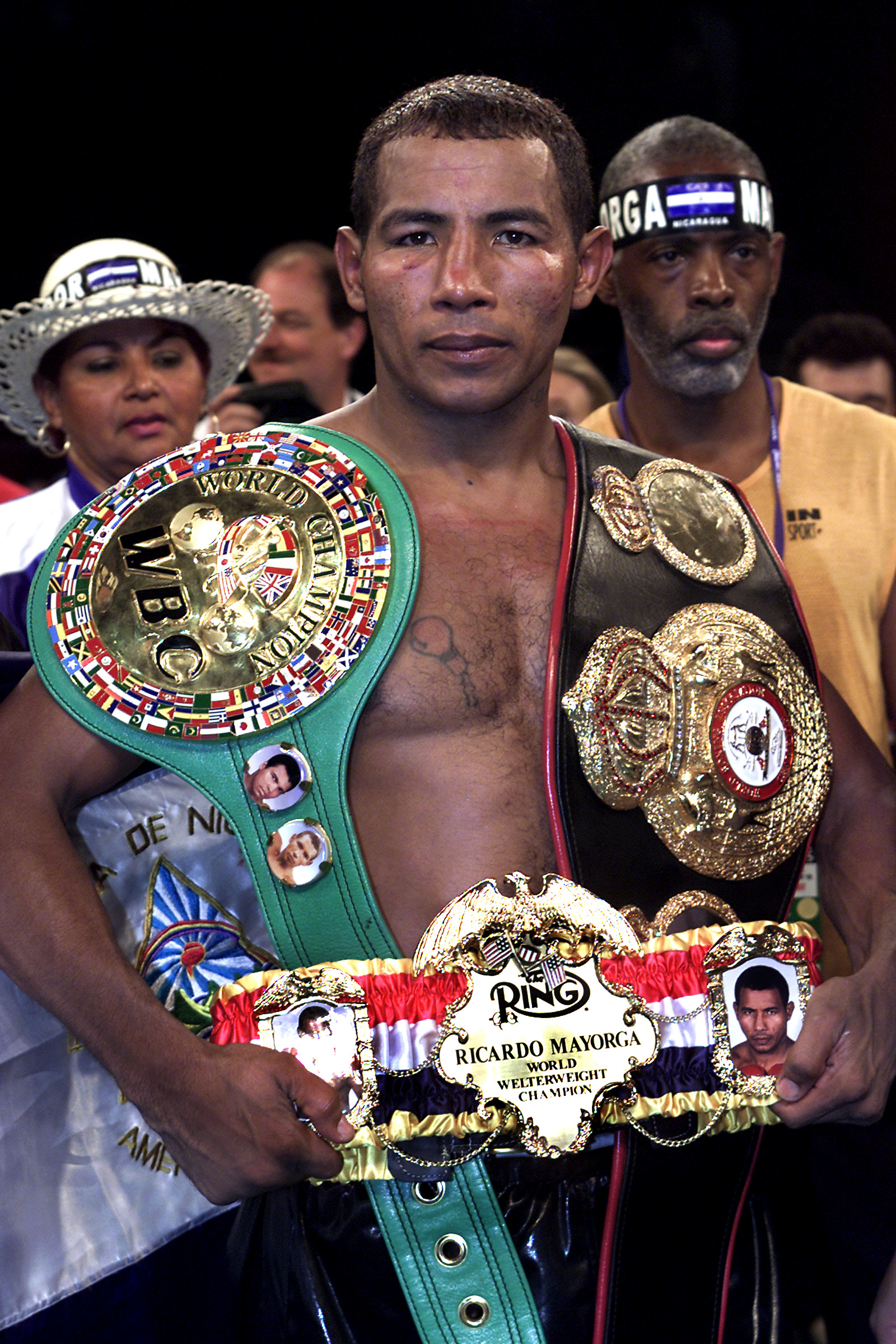 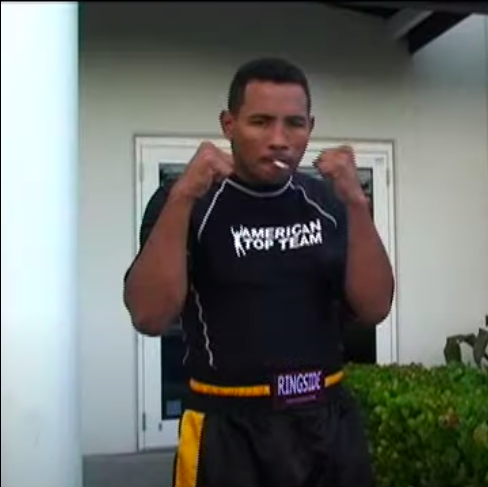 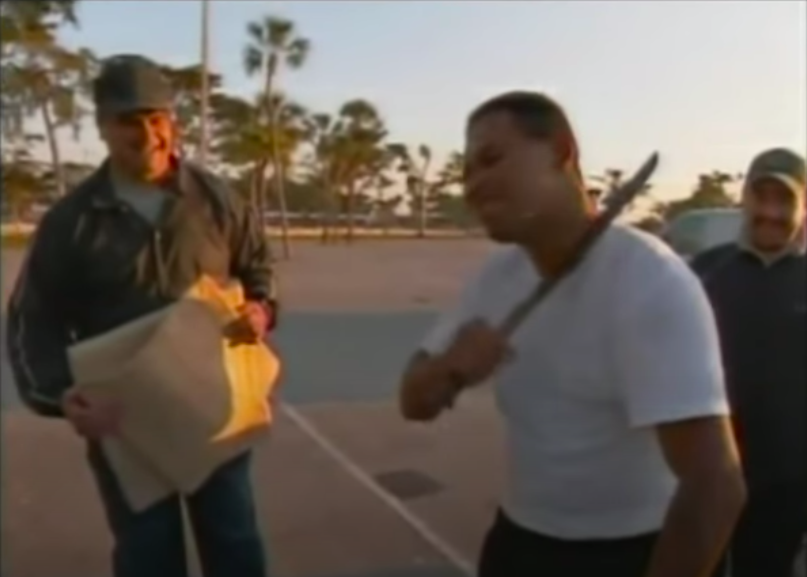 Mayorga, to control his aggression, began boxing at a young age and attended military school in Managua.

But still, violence surrounded him, leading to several fights outside the ring.

Mayorga turned pro in 1993 and fought around South America until 2001, when he made his US debut.

Despite not talking English, the Spanish-speaking loudmouth was an immediate star, due to his confrontational persona and showboating style.

He would purposely fight with his hands down and chin in the air, to entice opponents to throw, leaving them open for the counter.

Mayorga first won gold in 2002, beating Andrew Lewis for the WBA welterweight title, all on a diet of cigarettes and booze. 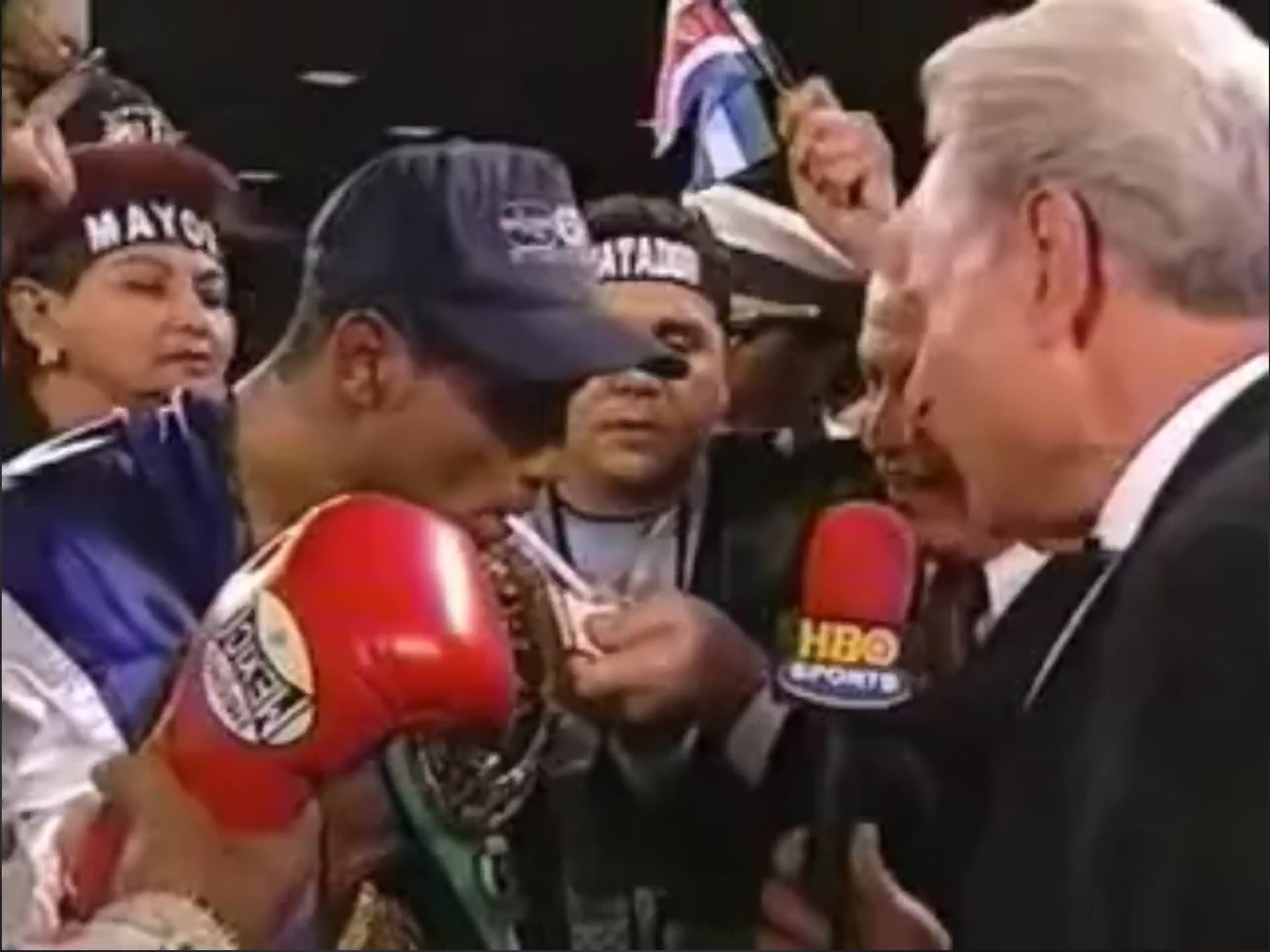 A year later, he unified it with the WBC belt against Vernon Forrest – and celebrated by smoking in the ring during his post-fight interview.

Despite his unhealthy habits, Mayorga was famed for his fitness, capable of running miles at a time during training.

His coach, Stacey McKinley, gave up trying to straighten out his addictions, and instead cut a deal with Mayorga.

McKinley in 2015 explained to Tru School Sports, why he allowed his fighterto smoke and drink.

He said: "I could deal with the champ. He's smoking cigarettes and drinking beer, OK, that's fine, we going to make a deal though, champ.

"On Saturday's, you can sit behind the camp, I'm going to get you a case of beer and pack of cigarettes and you can smoke all day.

"You've got to understand one thing, he was going to do it anyway. So it was my way of managing it, I had to manage it. You've got to be thinking outside the box." 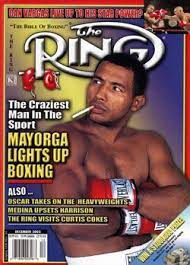 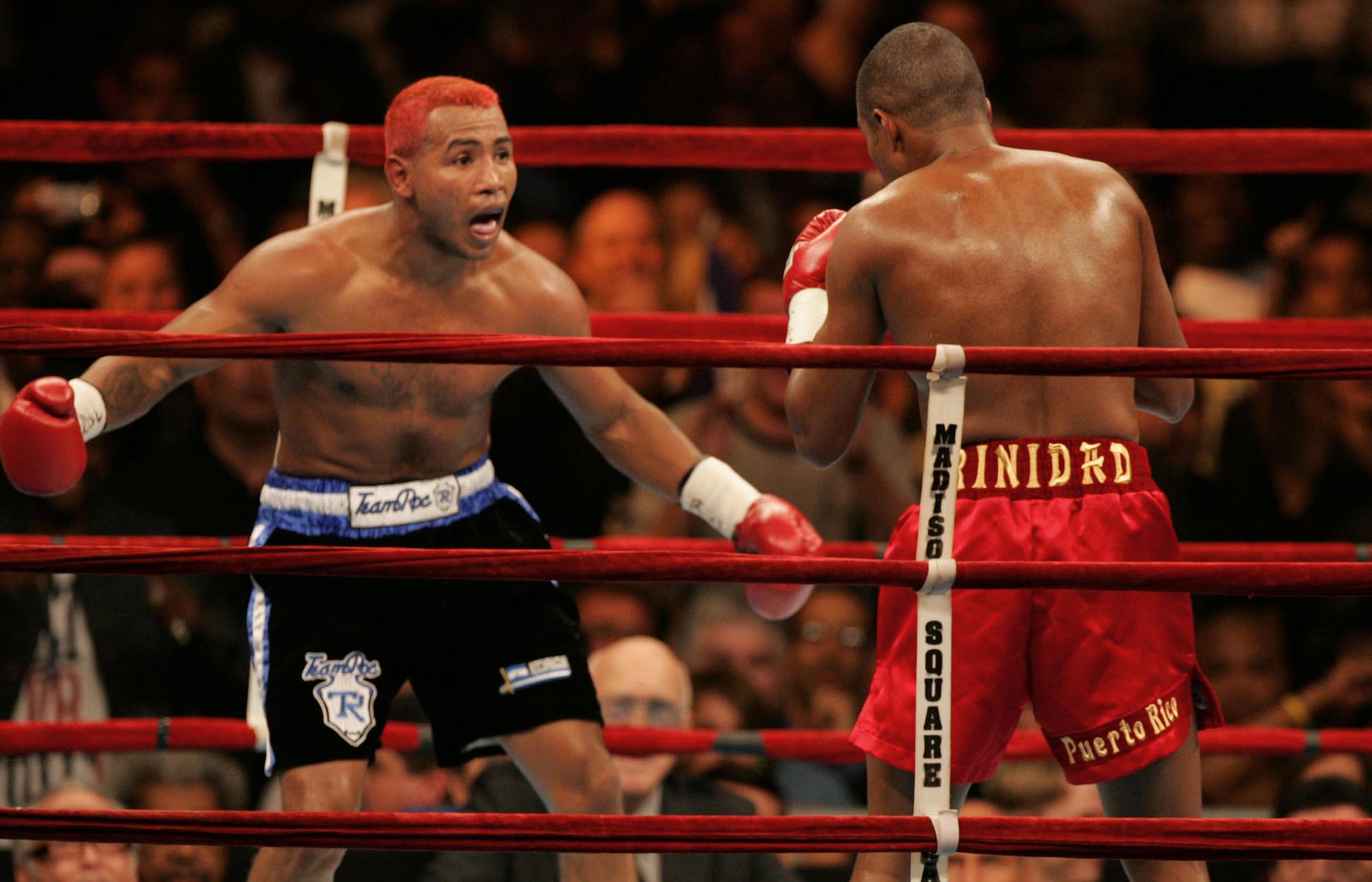 Mayorga in 2008 was asked by Wall Street Journal why he refused to give up smoking or drinking.

He replied: "That's how I became world champion and I like it."

Not only was Mayorga notorious for his lack of discipline and eccentric style, he was also public enemy No1 to any other fighter around him.

Most memorably he had a heated and bitter rivalry with De La Hoya leading up to their title fight.

Mayorga said of De La Hoya: "I wanna kill him. I wanna stop his heart with my right hand."

The Nicaraguan then accused the Golden Boy of throwing a fight with Bernard Hopkins in 2004.

And he mocked De La Hoya, who represented America in the 1992 Olympics, for his Mexican heritage. 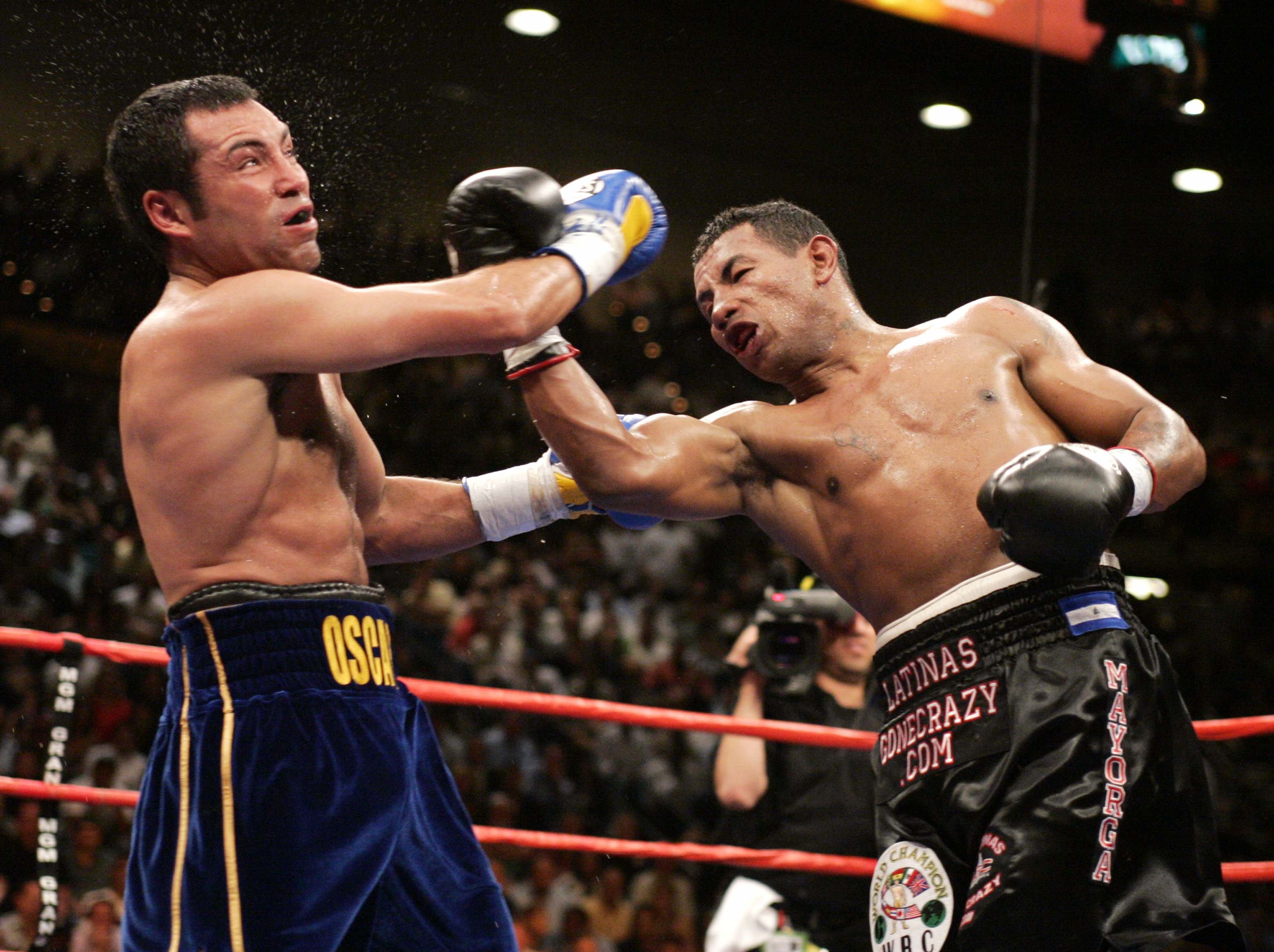 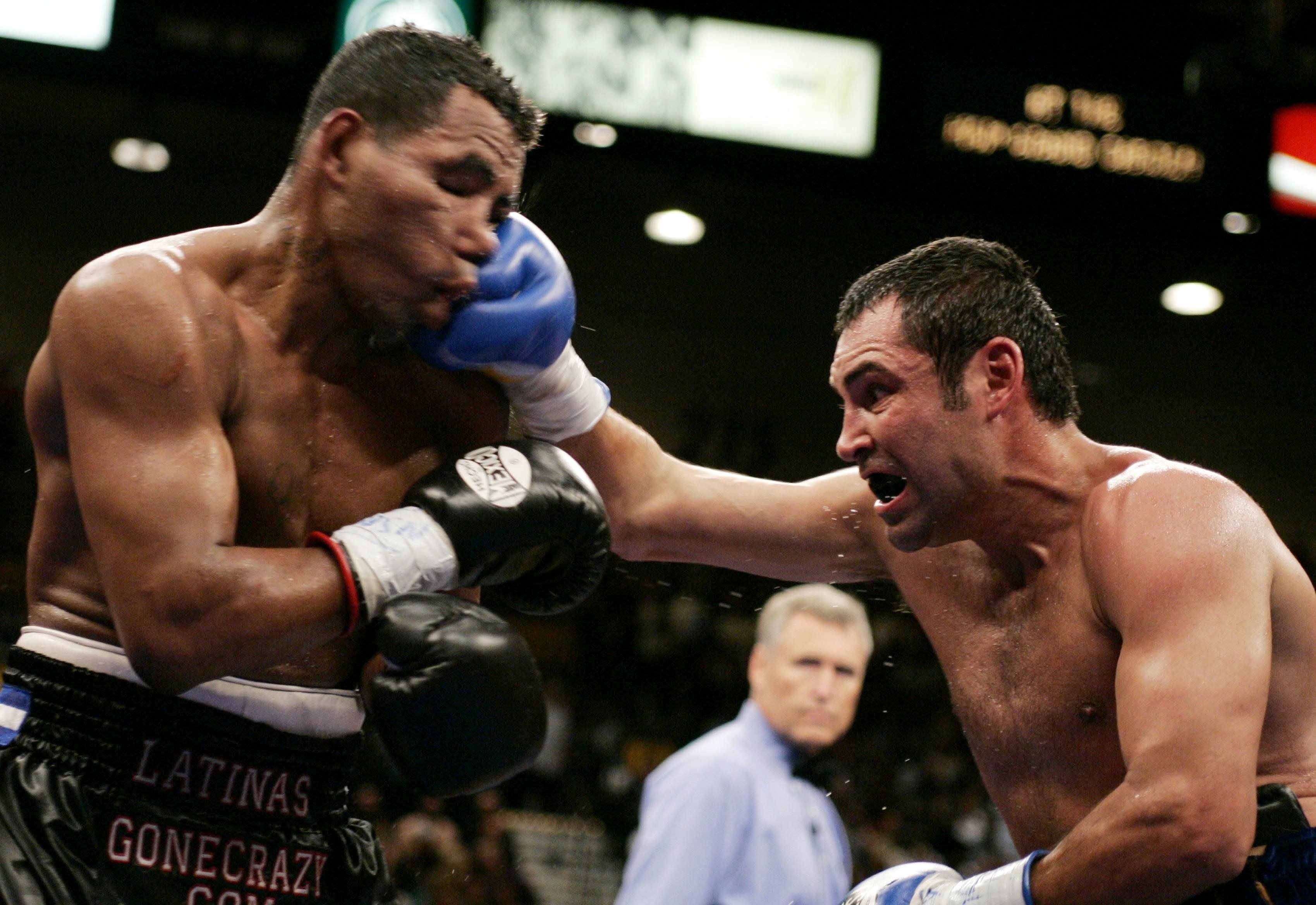 Mayorga said: "Tell your wife to screw you the morning of the fight, so you don't take a dive, like you did against Hopkins, f****t.

"You can't even represent your race, b***h. All the latinos are with me."

True to De La Hoya's word, Mayorga was beaten in six rounds, but evidently he was not humbled.

In his very next fight, he crossed paths with Fernando Vargas, and the two could not even go one press conference without brawling.

After Mayorga mentioned Vargas' wife on stage, a punch up between the pair broke out. 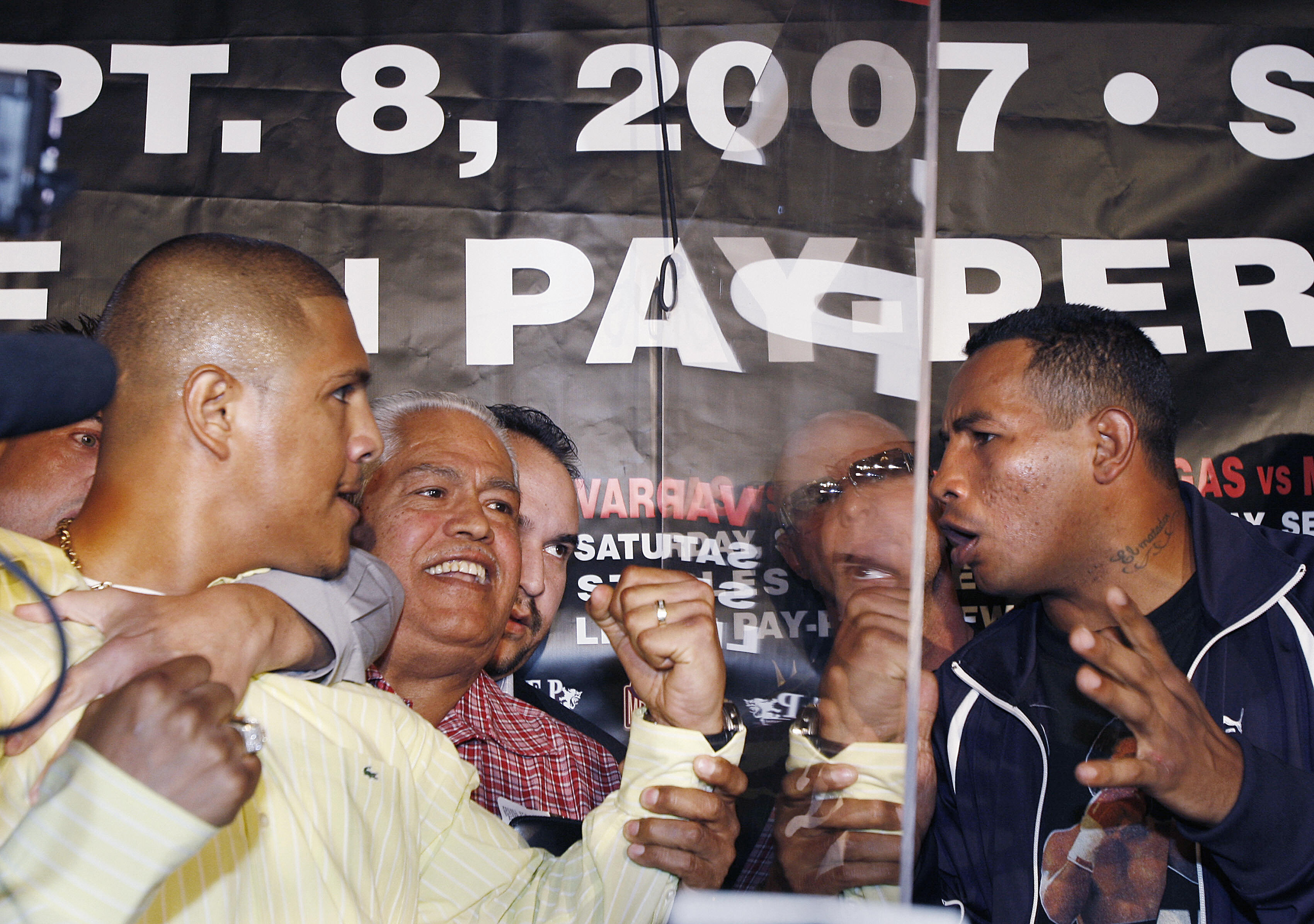 Mayorga went on to win the fight, but it was not the last time he would land in hot water for attacking an opponent's girlfriend.

In 2015, he agreed to a rematch with Shane Mosley, having already lost to the American in 2008.

Mosley put on the event alongside his girlfriend Trista Pisani, who hosted the press conference.

After Pisani bent over before the face off, Mayorga slapped her bum, causing another melee on stage.

Afterwards, Pisani offered Mayorga $10,000 to allow her to beat him up.

Controversy ensued later, as the WBC accused the incident of being staged, something Mosley denied. 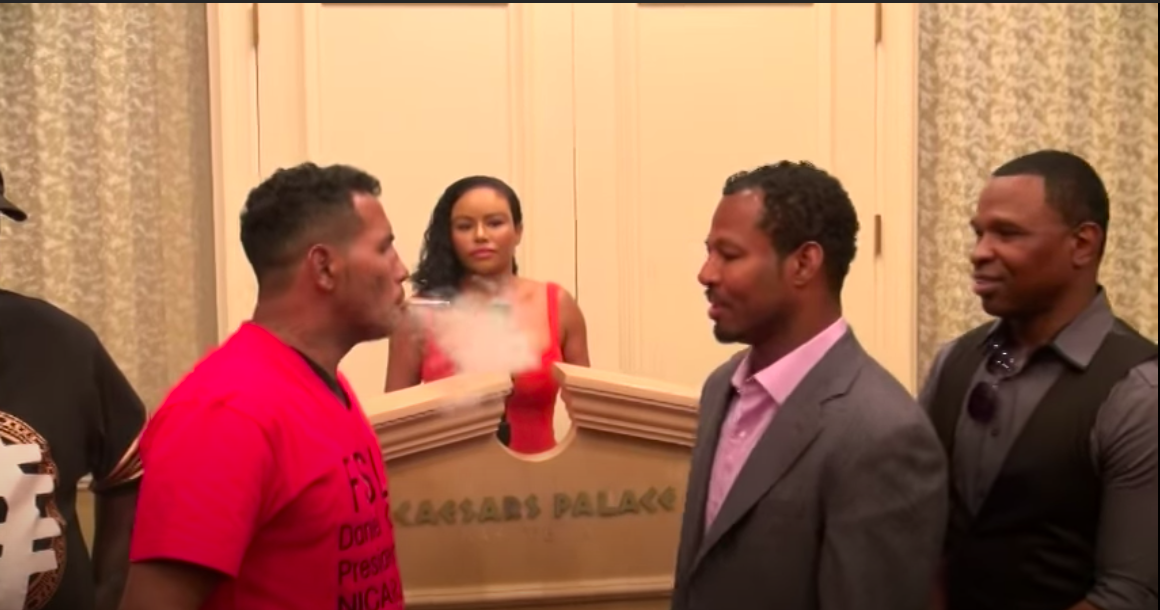 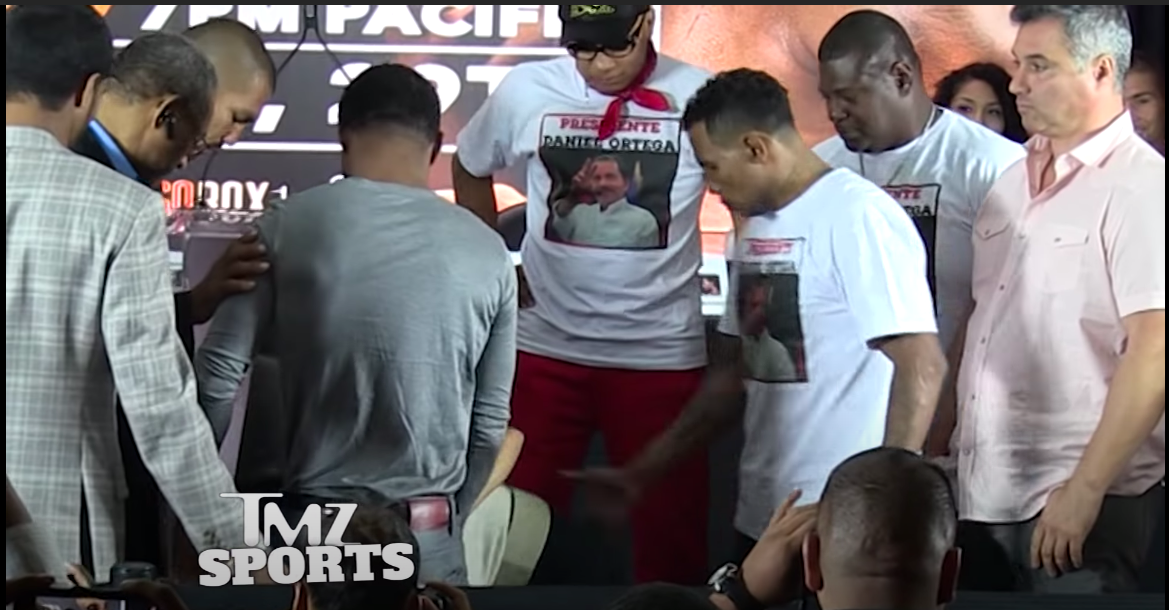 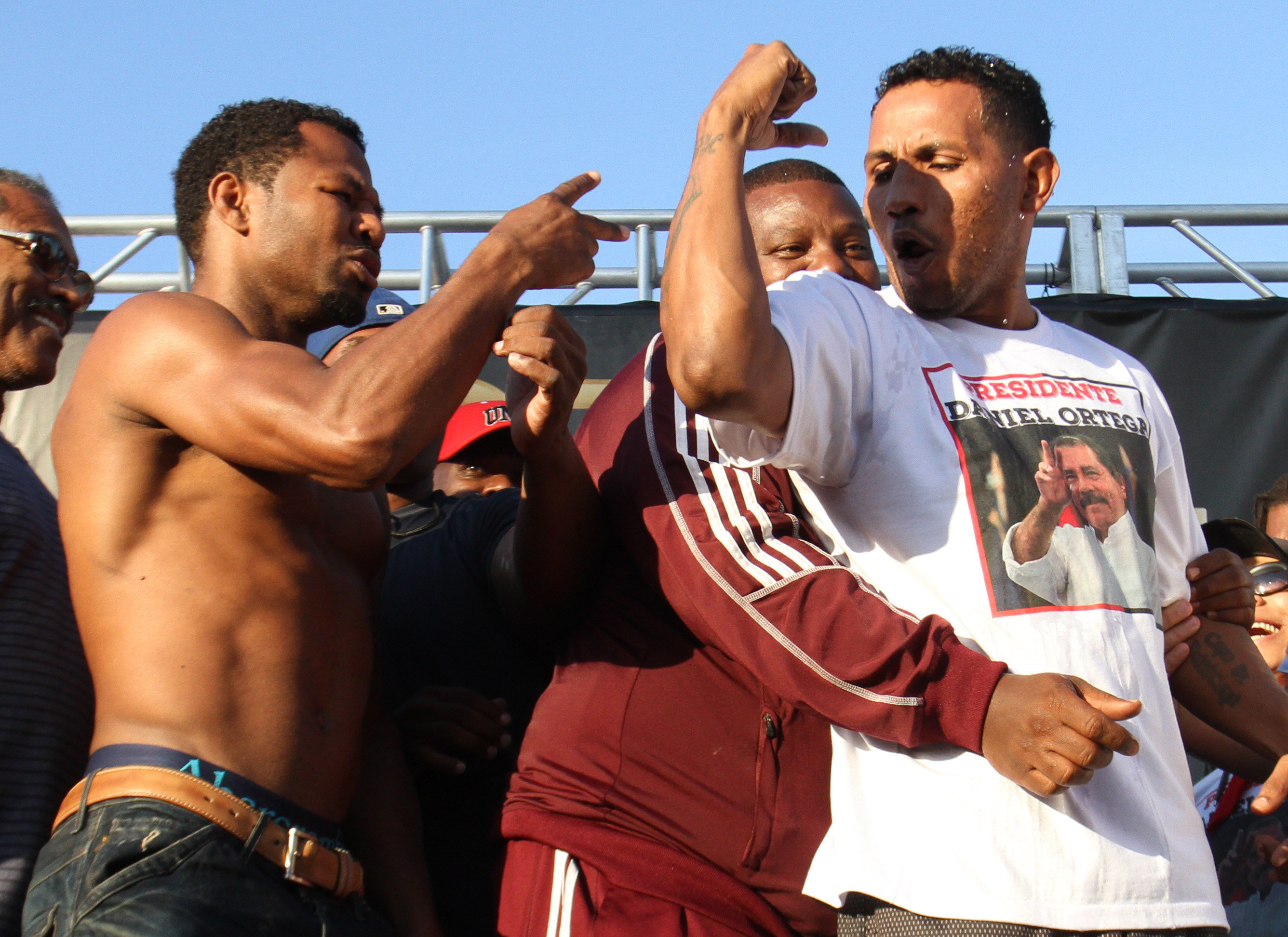 But the former three-division champion did suggest Mayorga is not quite as crazy as he seems on camera.

"But he's not really as bad as he is, but he does have a sharp tongue and a big mouth, especially if you can understand what he says."

With three losses on the spin, the final in 2019 against Argentine Lester Martinez, Mayorga finally called it a day.

In his career, he faced greats such as Miguel Cotto and Felix Trinidad, as well as De La Hoya and Mosley, while dabbling with three MMA fights.

But his legacy will live long in the memory, and with a sport filled with mavericks and personas, still, no one came close to El Matador. 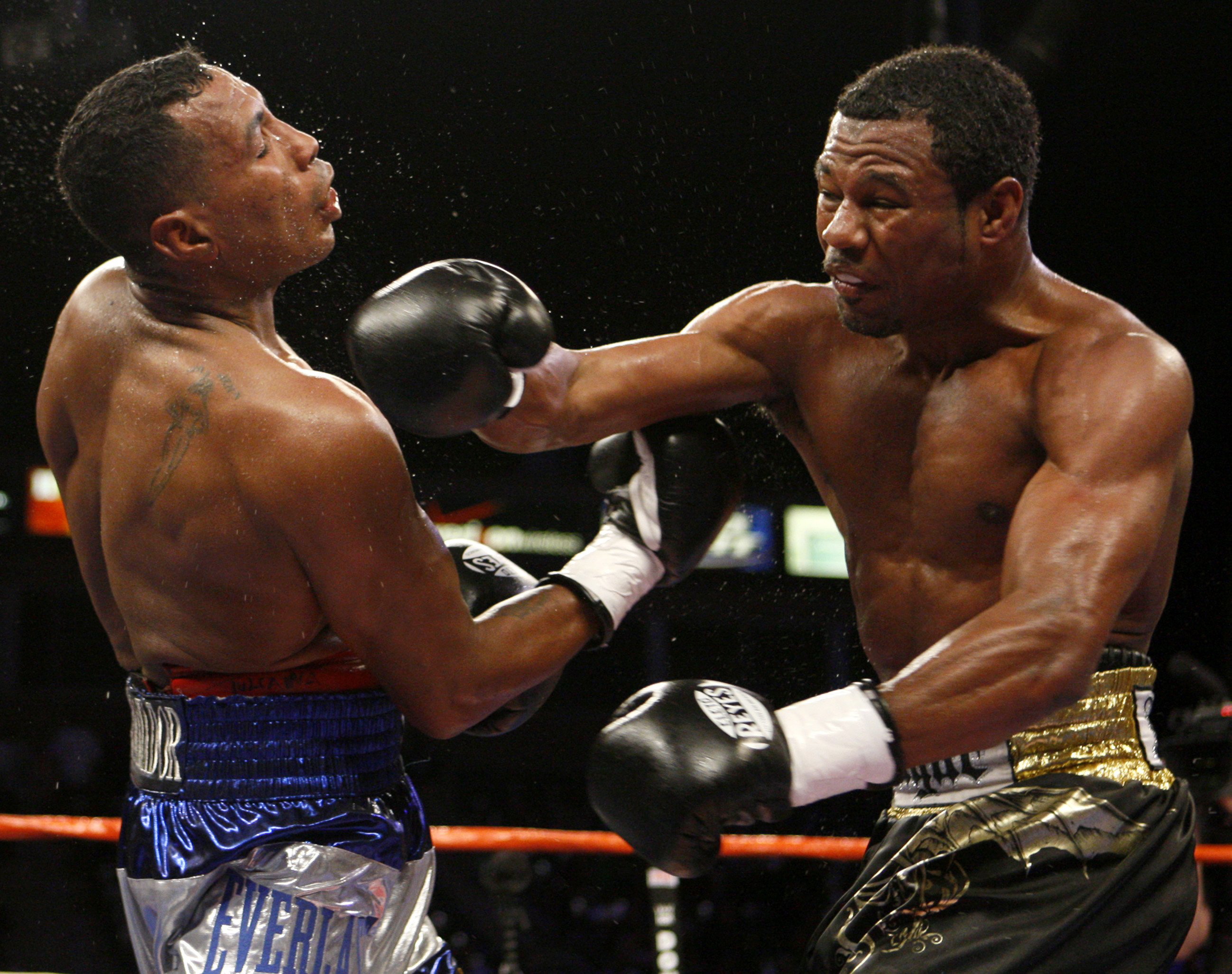 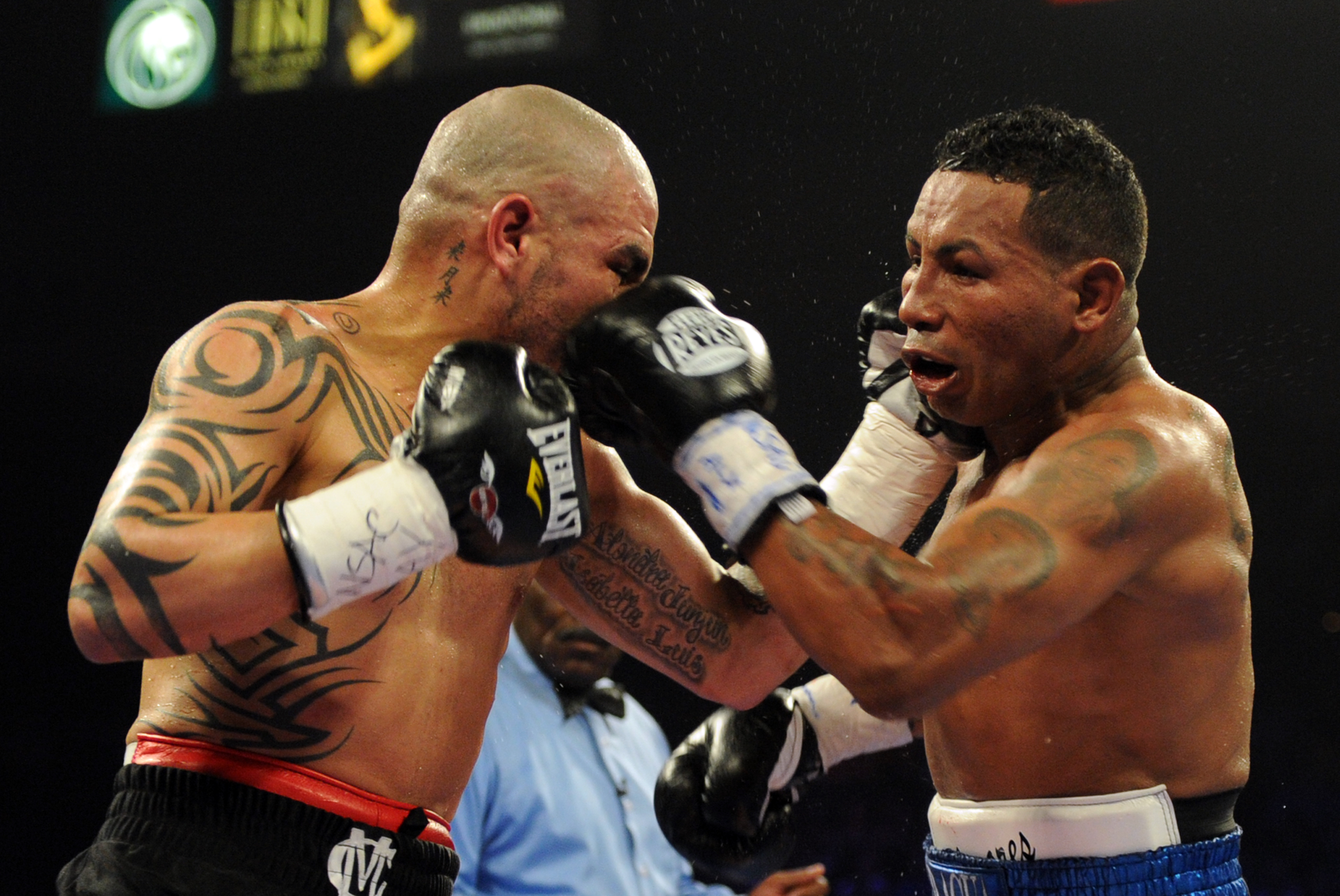