Having foiled the depleted Melbourne Vixens' finals hopes in the last game of 2018, the Sunshine Coast Lightning will return to Melbourne Arena on Sunday seeking to bury their hosts' top two prospects in the penultimate Super Netball round.

The Lightning hold a six-point lead over the third-placed Vixens, who salvaged a solitary bonus point from a disappointing 57-51 loss to ladder leaders the NSW Swifts last weekend. The Lightning had earlier collected six of the available eight against the Giants in what was their sixth consecutive victory. 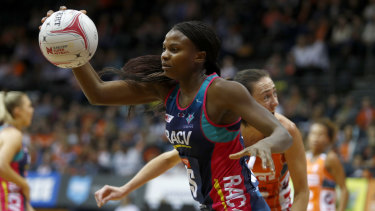 The Lightning are focused on the threat posed by the Vixens’ Mwai Kumwenda.Credit:AAP

"Swifts were able to consolidate their position at No.1 last week, so whoever wins this game, us or Vixens, will pretty much nearly consolidate the No.2 placing," said Sunshine Coast coach Noeline Taurua. "So it puts a little bit of spice, I suppose, into the regular season. It's exciting."

Yet as ominously as her traditionally slow-starting team is building towards a potential Super Netball three-peat, the master coach has identified the return from injury of Vixens' shooter Mwai Kumwenda and the relentless attacking efforts of Liz Watson as two key threats.

"It's interesting that Kumwenda is starting to come back in over the last couple of weeks, and whether she can handle a whole game I'm not sure, but that change-up between [Caitlin] Thwaites and Kumwenda is looking to be a bit of a strength, because they play different styles," Taurua said.

"Liz Watson, like always, is a master in distribution of the ball, and midcourt maestro in regards to being able to feed the ball into the circle, but just also what she does controlling the outside as well. Many a time we've tried to take her on, one on one, but sometimes that won't work either."

Still, expect Taurua to have a plan B, for success has been the 51-year-old's trademark during a remarkable three-year stretch. The only non-Australian coach in the national league also transformed New Zealand's fortunes after a disastrous Gold Coast Commonwealth Games, with World Cup glory the stunning result.

Yet she has vast respect for the Vixens and their 2014 premiership-winning coach Simone McKinnis, and believes the teams have not just a shared competitiveness and consistency but also an ability to play "beautiful netball" that is tough and structured but also skilful, clean and free-flowing.

"As I'm learning in my own way and understand it, it's a very Victorian style that the Vixens' play, and they keep possession of the ball and they do the business. I love the battle every time we take the court."

The Vixens' won the round six duel 62-52 at Sippy Downs, but it was the last of the Lightning's three losses, as new combinations were being developed in both circles following the departures of bookends Caitlin Bassett and Geva Mentor, added to a midcourt shuffle in which Laura Langman returned in place of Kelsey Browne.

Arguably its standout wing defence, veteran Vixen Renae Ingles, will be playing her last official home game at Melbourne Arena, her impending retirement having been confirmed several weeks ago, but the mother-of-two having known since she signed her 2019 contract that it would be her last.

Ingles' goal of a farewell premiership 10 years after her first also remains unchanged, and she was adamant there was no "wallowing" in what could be a costly loss to the Swifts after five wins in succession. Still, a follow-up defeat would push an appearance in the major semi – and thus any chance of hosting the grand final – beyond reach.

"We actually won the second half against the Swifts, so that's a big positive to take out of it, and a lot of the mistakes that were made out of our transition and gained ball were little basic errors, which should be easy fix-ups," said Ingles, 33.

"We had a great match against Lightning last time we met and we had a tough road trip last weekend, but we're excited to come home for our last official home game of the season and putting our best foot forward against Lightning.

"And look, after a loss, what you want to do is get out there against the best, and certainly Lightning are one of the best."