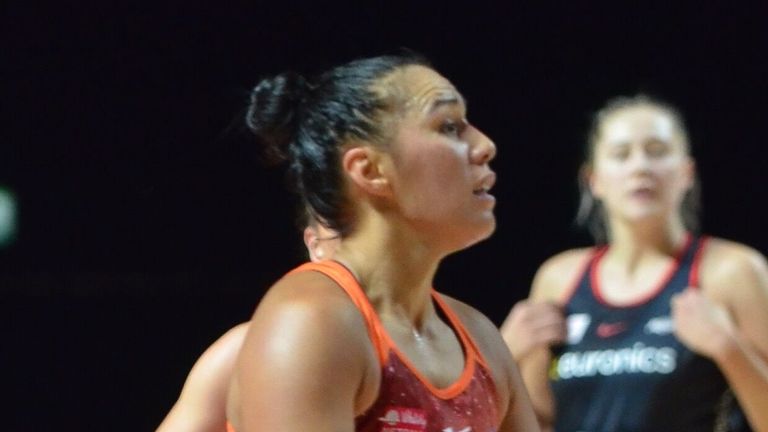 Liana Leota discusses learning from her Severn Stars team-mates and highlights their goal of being in the Grand Final at the end of the 2021 Vitality Netball Superleague season.

After her debut season with Stars was cut short, the former Silver Fern, who won Commonwealth Games gold in 2010 and silver in 2014, has re-signed with Melissa Bessell’s outfit.

When her move from Thunder to Stars was announced, it was hailed as a stroke of genius from Bessell and at the time, the head coach hailed her new signing.

“Liana is not only a world-class athlete, but an amazing leader with an enormous amount of experience and one of the most down to earth, beautiful people in the game today,” Bessell, who has known Leota since she was a teenager, said.

“It’s so exciting to have her playing for Severn Stars. She’s one of the most dynamic players with an innate knowledge of the game. Her passion and flair is simply magic.”

With her constant personal benchmark of helping the Superleague team she plays for to make the top four, Leota quickly lived up her to head coach’s assessment and set the standard for others.

Despite her considerable experience, the mid-court athlete also shared that having a new environment and team-mates has helped to challenge her further.

“Last season, I was put out of my comfort zone on more than one occasion which I haven’t had to do in such a long time,” she said.

“It reminded me that I am always a student. That there are always learnings both on and off the court.”

For who that know me, when it comes to netball, I am serious nearly all of the time! This team definitely taught me that sometimes you can have fun and still learn and listen at the same time.

As a result of Stars coming together as a new group, their opening matches of the 2020 season saw them finding their feet and culminated in an impressive 59-54 victory over Wasps Netball on March 14.

However, with COVID-19 taking hold of the country, the Vitality Netball Superleague season was halted shortly after. Stars, like all teams, were left with an itch that they couldn’t scratch.

“The end of last season is bittersweet,” Leota said.

“After beating Wasps in our final game before lockdown, we had finally found our feet as a team. If only we could have continued… I always wonder what could have been.

“We learned a few lessons in our first three games of the season. We knew we needed to step up individually, connect as a team and execute our plan, we had to prove ourselves.

“We did that in a complete team performance against Wasps and then we didn’t have another opportunity to back that up.”

Head coach Bessell understands that feeling of unfinished business and it was one of the drivers for her keeping the squad as settled as possible moving forwards.

Together Leota and Bessell are crystal clear about Stars’ objective for next season. It’s the same as it was ahead of 2020 term and that’s to be present in the Grand Final and be taking home the title at the end of it.

“It’s about winning, and everybody knows that,” Bessell said.

“We’ve already had a meeting and I’ve told my players that I’m going to be at the Grand Final… end of.

“For me, it’s important that the girls understand where my goal is so that they know that they have to raise their bar straight away.”

Leota is in total agreement with her head coach, and believes that the foundations are in place for them to achieve their objective of going all the way.

“Last season was meant to be our benchmark season and to see where we needed to improve going forward for this season,” she said.

“Some of us don’t have much longer left in our careers so I know my goal is to put in everything I can, both on and off the court, to give myself and my team-mates the best opportunity we can to get there.

“Our team is hardworking; everyone understands their own roles and responsibilities, and we are all willing to work for another. That’s the best foundation you can have going forward.”