Home » Sport » LeBron James is taking a victory lap after Trump’s election defeat, sharing memes mocking the president and calling him a ‘loser’ 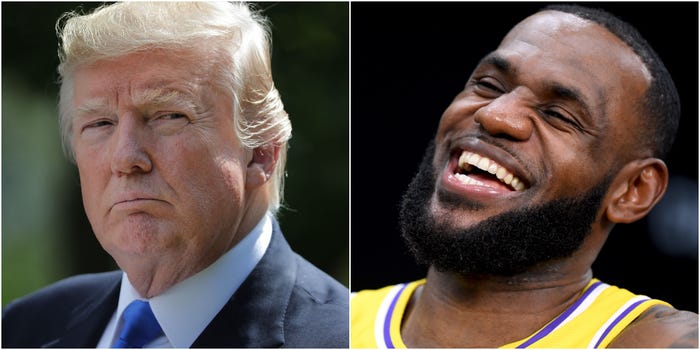 LeBron James is reveling in Donald Trump's defeat in the US presidential election.

James, an outspoken Democrat and critic of Trump, appeared delighted about the news.

The Lakers star tweeted a video of himself smoking a cigar alongside alongside a link to More Than A Vote, a campaign he launched to bolster the turn out from Black voters.

Hes star also posted an image of himself blocking the Golden State Warriors' Andre Iguodala during the 2016 NBA finals, however instead superimposed Biden's head over his own and Trump's over Iguodala's.

The image received over 1.1 million likes.

On Sunday, James then tweeted to call Trump a loser.

James has repeatedly clashed with Trump over the past four years. In September 2017, he called Trump a "bum" for withdrawing his offer for the Golden State Warriors to come to the White House after their NBA finals victory.

In an interview with 2018, James said that Trump is "someone who doesn't understand the people" and "really don't give a f— about the people."

Amid James' involvement in this year's election, Trump described the NBA star as "nasty" and a "hater" during an interview with Rush Limbaugh, while he also basked in chants of "LeBron sucks" at a recent rally in Pennsylvania.

Biden will be inaugurated as president on January 20, 2021.