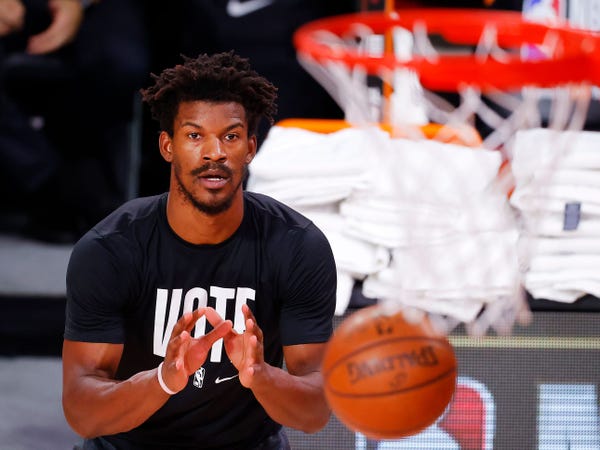 In addition to leading the Miami Heat to the NBA Finals, Jimmy Butler has become quite the entrepreneur inside the NBA bubble.

With players and staff removed from the regular comforts of home, Butler recognized a soft spot in the market and decided to start a business: Big Face Coffee.

Butler's barista career took off from his hotel room inside the bubble at Disney's Wide World of Sports complex and was ingenious in its simplicity. Butler offered better coffee than you could find elsewhere on campus, for $20 a cup. Small, medium, large, espresso, latte; no matter how you liked your coffee, it costs $20.

"You can't get coffee nowhere here," Butler told ESPN's Rachel Nichols earlier in the season. "So I might bump it up to $30 a cup. Just depends. People here can afford it."

But Butler might have to hold off on that price increase, as a bit of friendly competition has emerged to his burgeoning business.

According to a report from ESPN's Malika Andrews, Heat assistant athletic trainer Brandon Gilliam has started serving his own brand, "Little Face Coffee," out of his own room, for the much more reasonable price of $5.

"My poor video coordinator, he can't afford that," Gilliam told Andrews of Butler's coffee. "He is up all hours of the night, breaking down all sorts of film. I am just trying to keep him going."

Gilliam's startup is a no-frills version of Butler's service — the Southwest Airlines to Butler's Delta. In juxtaposition to Butler's plethora of options, Gilliam's coffee comes one way: black.

"I tell [Butler], 'You're the high frills, you make mochaccinos and frappe-lattes,'" Gilliam said. "'I am just black coffee, man. So let me have my little world down there.'"

While the competition inside the bubble remains hot, only Butler has potential plans to continue to grow his business. According to Butler's agent Bernie Lee, Butler has already been working towards trademarking Big Face Coffee, with the possibility of expanding the brand.

"I didn't understand the coffee hustle before," Lee told ESPN. "There are bean brokers, roasters — I didn't know any of that. Seven out of 10 calls I get now are about coffee."

But as the bubble moves towards its conclusion with the NBA Finals, the competing coffee brands serve mostly as a show of camaraderie amongst the team.

"It just goes to show how close we are as a team, as a staff, that we have so much fun with all of it," Butler said. "We got a little competition, but it's all fun and games. Now, I make way more money than he does over at Little Face Coffee. You should know that. Big Face is still the one. But you know, it's all love."

Is Arsenal vs Sheffield United on TV? Channel, live stream, kick off time and team news for Premier League match – The Sun