When water polo star Hannah Buckling first emerged from the water after being punched in the face by a Brazilian opponent at the Rio Olympics, little did she realise the hit would put a premature end to her Games.

It wasn’t until she was sitting alongside the team doctor after the game that she knew something was seriously wrong.

“After the game, I was sitting in the doping control area with the sports doctor as part of the drug testing protocols,” she said.

“I just said, ‘Look at this thing that’s happening with my eye’, and when I blew my nose, my eye would bubble.

“At the time I had no idea. But he knew straight away and we went to the hospital. From there it was just a bit of a blur, I was just in shock.”

As she prepares to fly out to Tokyo on Saturday for her second Olympics, Buckling opened up on the injury which she says ultimately stopped her from walking away from the sport. 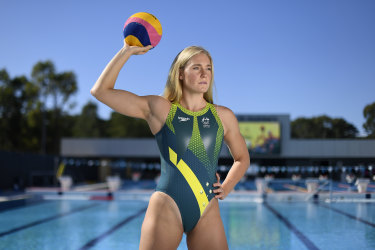 Hannah Buckling will go to her second Olympics.Credit:Getty

Despite only appearing as a cut on her face, she had actually suffered a fractured eye socket – putting an end to her Rio campaign.

Having only played three games, Buckling spent the rest of the Games watching pool-side as the Stingers lost their quarter-final on penalties to finish in sixth place.

Now getting a second chance at her Olympic dream, Buckling said she is ready to showcase her transformed skills on the world stage.

The 29-year-old said she has matured and developed her style of play as a direct result of the punch, which she says she was certainly provoked by her own aggressive style.

“When I blew my nose, my eye would bubble.”

“As a young player coming through, with not as much game experience as I have now, I used my strength and my speed and my physicality in the last Olympic cycle a lot more. Now, I am able to use my brain over my physical capabilities,” she said.

“While I’m still able to be aggressive and strong, it is now in a much smarter way.”

Buckling admits that after returning home from Rio, her shock quickly gave way to anger over the attack which curtailed her Olympic participation.

As a result, Buckling reached out for mental support to ensure her negative state of mind wouldn’t go on to impact her game. 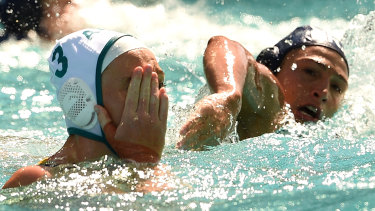 Buckling clutches her eye after being punched in the face at Rio in 2016. Credit:AAP

“Once the shock wore off I was definitely angry for a while,” Buckling said. “But as athletes, we are so connected with psychology and mental health and so it was a matter of connecting with psychologists through the AIS and making it a productive use of emotions rather than a destructive one.”

Buckling insisted that had it not been for the injury, she may not have continued with the sport, as the setback had given her a greater appreciation for the big moments.

“While it was completely devastating at the time, I’m quite grateful for it in a way as it kept me playing in a way I wanted to. An older athlete, a more mature athlete,” she said.

“It’s given me a lot of motivation for these [Games] because I just feel that my Olympic campaign was so unfinished last time.”