When Heather Hardy suffered her first loss as a professional athlete, she walked out of the cage with her “f—— nose hanging off” her face.

She had already won 20 fights as a boxer, setting records, and was an accomplished amateur. But in 2017 she switched sports, signed a contract with mixed martial arts firm Bellator, and won her cagefighting debut in her home city, New York, in the summer.

After that win, Hardy addressed the press, smiled despite bruising on her cheek, a black eye, and blood splattered over her white training bra, and said she had “fallen in love” with the game that night. “I’m so happy right now,” she beamed. “I don’t even care I have stitches in my face.”

She lost her second Bellator bout later in the year but showed great heart by fighting through moments that would distress normal people. She wanted to carry on throwing punches even though she was wearing a mask of blood.

Her opponent Kristina Williams landed a perfect kick — shin bone to face — in the second round. According to the combat sports website Bloody Elbow, Hardy suffered a nose “explosion” and bled profusely. The ringside doctor said Hardy was in no state to continue. It was over.

ToLuke Thomas on Sirius XM, Hardy would later say she was kicked so hard she was blinded temporarily. She was also “spitting chunks of bone” out her mouth.

But Hardy is not like many people. For Hardy, this was just an occupational hazard from competing in the sport she loves.

Watch a recap of her first MMA fight here:

Hardy is now just days away from her fourth MMA bout and has been telling Business Insider why fighting is so much fun.

“I have a lot of cockiness and confidence in the boxing ring as I know what I can and can’t do in there,” Hardy, who is an undefeated featherweight world boxing champion, said.

“So it’s a different kind of fun in both, right? There’s a lot more going on in the cage, a lot of stuff I don’t know how to do, or how to get out of. You get to see my primal instincts and the street come out of me. 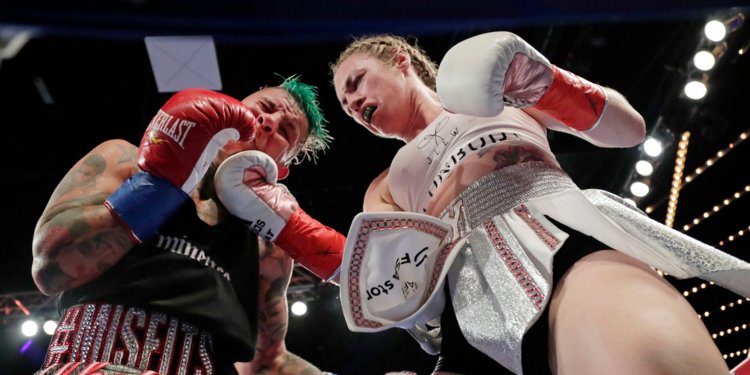 Hardy survivedsexual assault when she was just 12 years old, a difficult divorce from an ex-husband who didn’t pay child support, and homelessness when a natural disaster ravaged her neighborhood.

Hardy tells us when she divorced in her 20s, she moved her daughter in with her sister and her nephew. Hardy took on the role of the father while her sister played mom to their kids, she said.

She worked seven jobs in the New York gig economy to bring money into the house. She sold lights in the Bowery district, stacked shelves, and did internet marketing. She delivered books to high schools and did secretary work “for random companies.” She even volunteered for USA Boxing, the national governing body for Olympic-style amateur boxing in America, and answered phones in the city’s iconic fight club; Gleason’s Gym, a place steeped in boxing history as Rocky Marciano, Muhammad Ali, and Roberto Duran all trained there.

The divorce made her try something new: fighting.

It turned out she was a natural even though she began the sport as a 28-year-old. “Within 18 months, I had won every title you could as an amateur boxer.” She won Golden Gloves, national championships, and was the number one amateur competitor in her weight class in her country, she said.

Read more: Manny Pacquiao’s next opponent Keith Thurman has pushed back against Deontay Wilder’s controversial comments, saying boxing is ‘not about killing people’

Hardy turned professional after her 30th birthday, in 2012. Shortly after, Hurricane Sandy hit New York and devastated many communities throughout the five boroughs.

I’ve walked out of MMA with my f—— nose hanging off my face.

The hurricane put the Hardy home in Gerritsen beach, Brooklyn, “under seven or eight feet of water,” Hardy said. It made her and her daughter homeless.

Hardy sent her daughter to live temporarily with relatives while she worked and slept at Gleason’s, evencrying in an office at the gym, until she got back on her feet.

Hardy’s boxing coach Devon Cormack took her under his wing. “Devon taught me how to teach people [to box] and took me on as an apprentice. I was able to quit one job at a time until I had enough of a clientele. I could use his office at the gym, he let me use the equipment and stuff, and he moulded me into the coach that I am today.

This meant she never had to worry about working in the gig economy again.

Hardy said inan ESPN feature last year that people would say to her that she’d never be able to “make a career” out of boxing, and that if she were to compete then it would have to be for fun.

For Hardy, boxing remains behind the times. It fails to sufficiently promote its athletes, more so its women, and has been beaten to the punch by MMA, which makes superstars out of Ronda Rousey, Miesha Tate, Cris Cyborg, Amanda Nunes, and Valentina Shevchenko.

“It was 2012 before women were even allowed to box in the Olympics. Boxing is the oldest sport since the first Olympics. And girls in 2012 are just allowed to box? We’re so far behind the times,” she told Business Insider.

“Women have been openly welcomed in MMA as fighters, but boxing has been slow coming around to it. I’m 37 years old. I don’t have 10 years for the sport of boxing to come around.”

I make more in MMA than I did in my world title fight in boxing.

She has long been a full-time trainer and fighter, but it’s only since she made the decision to move into MMA that she experienced a significant bump in pay.

Are Bellator fight contracts considerably larger than the ones she received because of boxing. “Yeah!” She said with no hesitation. “I mean, I’ve fought in a [boxing] world title fight. I fought for a world title in October. On HBO, right?”

Hardy said the broadcaster helped fund a $4.2 million purse to compensate boxers Daniel Jacobs and Sergiy Derevyanchenko for their main event fight. But Hardy’s bout against Shelly Vincent, also for a world title, didn’t get anywhere near that much. “They put 10 grand in the pot for my fight.”

She added: “I make more in MMA than I did in my world title fight in boxing.” 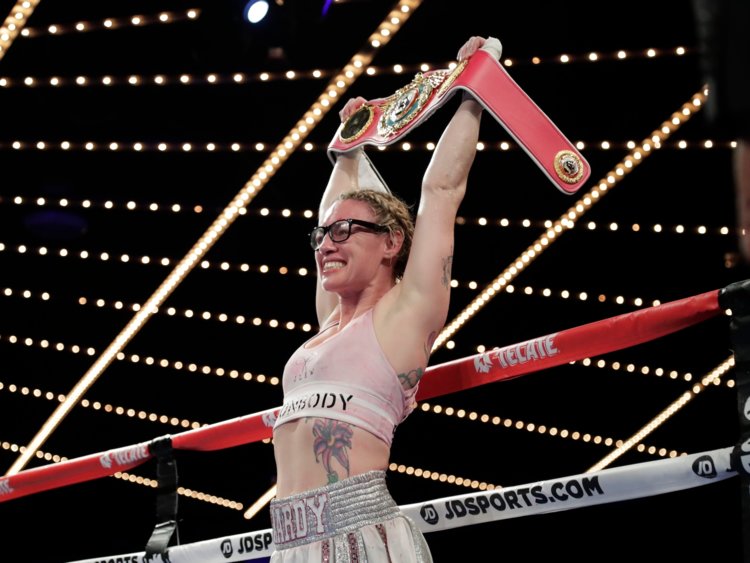 If competing as a mixed martial artist in Bellator’s circular cages provides a superior salary, surely she wouldn’t be tempted to return to the ring. “Well … if the money’s right, then you can still convince me! If it makes dollars, it makes sense.”

One boxerHardy has long been linked with is Katie Taylor, a wildly successful amateur with 18 gold medals, including one at the 2012 Olympic Games. Taylor has the backing of boxing juggernaut Matchroom Sport, the same company that promotes Anthony Joshua, Callum Smith, and Oleksandr Usyk.

What’s yours will be taken from you … The politics of boxing does not care who it takes from, whether its a single mom, a full time police officer, or a world champion.

Controversy surrounding the result, a win for Taylor, was somewhat overshadowed by the nature of Joshua’s loss in the main event. But Hardy believes the victory was not fair, that the belts were taken from Persoon. She decried what she saw as injustice on her Twitter account.

Read more:Anthony Joshua’s humiliating setback proves he should have listened to Floyd Mayweather 2 years ago

“I’d love to clarify a little bit,” she told us. “I’m in no way shape or form a Katie hater. I am one of Katie’s biggest fans. What she’s done for the sport of women’s boxing, the way she carries herself, she is a true champion and a true queen. And I genuinely mean that.

“My being upset comes because with a fight like that you have two champions in the ring, two champions defending their belts, right? You’re supposed to have a fight where the only way a person loses their belt, is if the other person beats them for it, right?

“There is no way Delfine Persoon lost her title. They were taken from her. Katie didn’t earn that win. And I know I’m not the only one to score it that way. The way that girl fought her heart out and outworked Katie in the last four or five rounds of that fight, she did not deserve to walk out of that stadium with that ending.

“And it just really speaks to the politics of boxing. If you’re not protected and you’re not the promoter’s girl, it doesn’t matter if you win. What’s yours will be taken from you. The politics of boxing does not care who it takes from, whether its a single mom, a full-time police officer, or a world champion.”

That is one of the reasons Hardy feels more at home in MMA than in boxing. “I just hate the thought of handing it over, you know what I mean? That’s the s— part about boxing.” 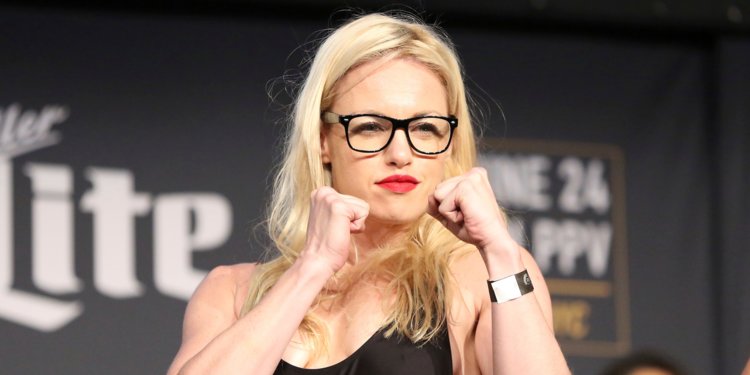 Regardless, she won’t rule out defending her boxing championship. “I’m WBO world champion, single mom, fighting in both sports.”

She’s got a ton of experience, but … I’m a beast. I wouldn’t want to fight me.

Hardy fights on Friday at Madison Square Garden again in New York. She takes on Taylor Turner in an MMA fight at Bellator 222.

It will be a festival of fights and includes big-name combatants Aaron Pico, Dillon Danis, Darrion Caldwell, Lyoto Machida vs. Chael Sonnen, and the headlining bout Rory MacDonald vs. Neiman Gracie.

It is a big event for Hardy, for Bellator, and the fight game in general. It is the third weekend in a row the Garden has hosted a big combat sports event, after Gennady Golovkin’s knockout win over Steve Rolls, and Joshua’s stunning loss to Ruiz Jr.

Hardy’s opponent Turner has traded wins for losses throughout her career, but has beaten her last two opponents by stoppage. Hardy isn’t taking her lightly, but she also has no fear. “She’s got a ton of experience, man. I’m not taking this chick lightly. My team is preparing me for her type of style.

And neither would we.

How ‘Kramer vs. Kramer’ hit a national nerve, 40 years before ‘Marriage Story’