Seven months after departing as NRL chief executive, Todd Greenberg is set to land back in an influential position in sport with a seat on the board of the NSW government’s powerful new stadiums controller.

The new entity, which will oversee the state’s major sports venues including the SCG, the rebuilt Allianz Stadium, ANZ Stadium and Bankwest Stadium, is in the final stages of being formed, with an announcement due on board members in early December. 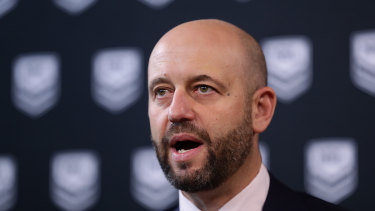 An effective amalgamation of Venues NSW and the Sydney Cricket and Sports Ground Trust, it will take on the name of the former but be fronted by the chairman of the latter, leading business figure and GWS Giants chairman Tony Shepherd.

He has led an interim body established in June, which also includes Sydney Olympics bid boss Rod McGeoch, ex-Australian Rugby League chief John Quayle and Suncorp chair Christine McLoughlin. While they and other long-serving directors of Venues NSW and the SCG Trust, including recently retired broadcaster Alan Jones, are likely to have seats on the 11 to 13-member board of the new stadiums agency, sources with knowledge of the appointment process say Greenberg is also expected to be among those named.

The appointments to the board still have to be signed off by state cabinet but Greenberg’s addition would give him a voice when it comes to the stadia strategy of the code he led as chief executive from 2016 until April.

The former Canterbury Bulldogs CEO resigned as Australian Rugby League Commission chairman Peter V’landys took charge of tense broadcast negotiations with Nine and the game’s plans to re-start the competition after it was suspended on March 24.

Directors on the existing Venues NSW have been paid $30,000 a year, with the chair getting $60,000, but according to sources those fees are expected to be lifted in the newly constituted organisation.

For the government controlled body, the presence of the 49-year-old Greenberg would give it representation from a younger generation and from an administrator who has until recently run a sport.

For Greenberg, who developed a close relationship with NSW Premier Gladys Berejiklian while CEO of the NRL, it would be a re-entry to sport and the corridors of power after a stint on the sidelines.

When approached, a NSW government spokesman said: “The NSW government will appoint the new Venues NSW board in due course to strengthen our state’s position as Australia’s number one destination for sport and live entertainment.”

Greenberg has also been linked with a new job in cricket after being encouraged to apply for the soon-to-be-vacant Australian Cricketers’ Association chief executive’s role.

A former first-grade cricketer in Sydney, he has existing relationships with people in the game including players and administrators.

A source close to him said he was still to decide whether to throw his hat in the ring, with the ACA eager to have a replacement for the departing Alistair Nicholson appointed by Christmas.

However, the source said Greenberg still had his eye on the more lucrative and prominent CEO’s job at Cricket Australia, which has been filled on an interim basis by Englishman Nick Hockley since the exit of Kevin Roberts in June.

CA has said it will not look to search for a full-time successor to Roberts.