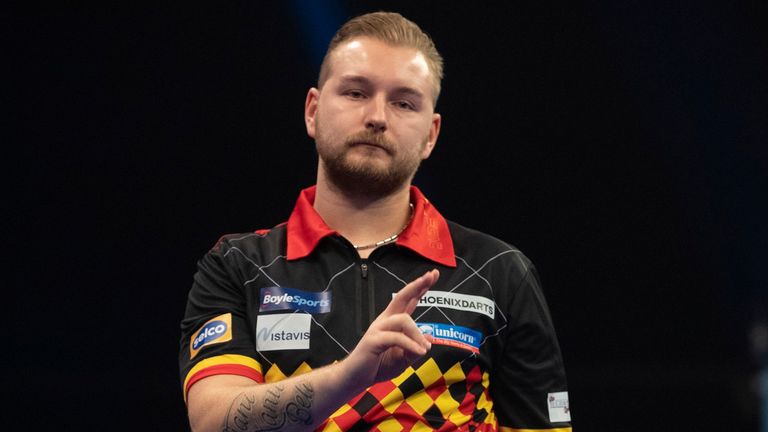 Dimitri Van den Bergh kept alive his hopes of another televised major title with a dazzling victory over Jonny Clayton at the Grand Slam of Darts.

Van den Bergh produced another blistering display of scoring to dispatch World Cup winner Jonny Clayton and move into the last eight to stay on course to add to the maiden major he captured at the World Matchplay earlier this year.

De Sousa withstood a storming fightback from Chizzy to keep his hopes of a title on debut alive thanks to a 10-7 victory in a topsy-turvy contest.

World Matchplay winner Dimitri Van den Bergh continued his blistering start to the tournament to blow away Jonny Clayton with a 10-3 victory and another 100+ average – the fourth time he has achieved the feat in four matches. 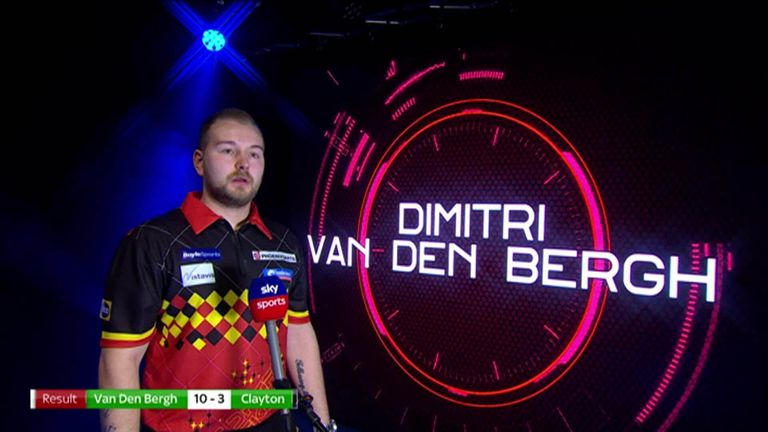 The Machine believes he is in the right form for a run at another major title, and after winning six of the last seven legs, he looks ready to go one better than his previous Grand Slam runner-up finishes in 2010 and 2016.

White had come through his group with just one victory, but he was more than a match for Wade across the opening seven legs that went with throw.

Wade struck the first blow, breaking to lead 5-3 in a messy eighth leg, before handing ‘The Diamond’ a chance to break straight back which he took via a classy 85 on the bullseye. 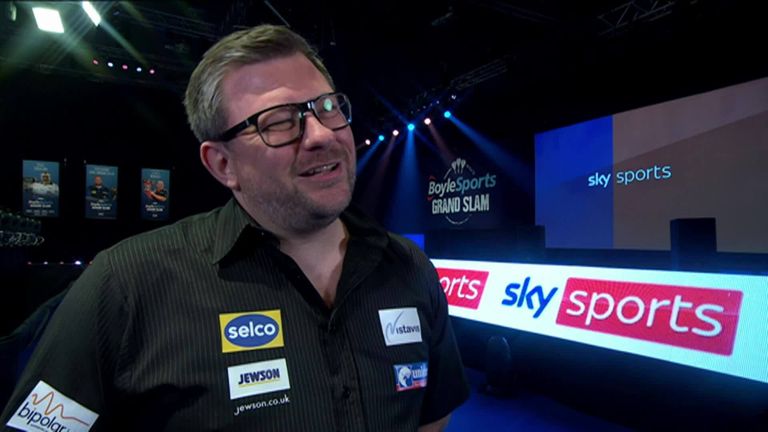 That was as good as it got for White, who could only watch on as Wade landed the third successive break of the match. When White missed bullseye for a 161 that would have made it 7-5, Wade mopped up for an 11-dart leg.

White wasted more chances for a first Grand Slam quarter-final as Wade eased into a meeting with either Devon Petersen or Damon Heta, the debutants who clash in the last 16 on Saturday. 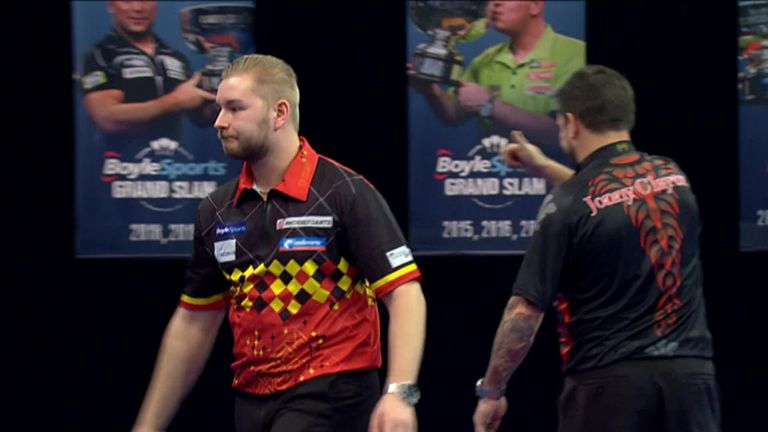 Jose De Sousa has been making waves on the Pro and European Tour for a couple of years, but a roller-coaster victory over Dave Chisnall saw him into the quarter-finals of a major televised title for the first time in his career. 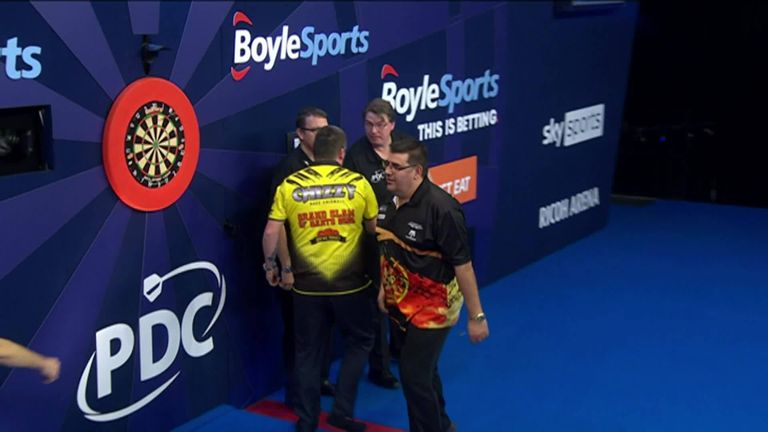 The Special One took advantage of a struggling Chisnall to turn an early 2-0 deficit into an 8-2 lead, but with the winning post in sight he faltered and world No 7 Chisnall stirred into life.

Almost at the point of no return, 2014 runner-up Chisnall stopped the rot at eight to win the 11th leg and close to within five before back-to-back 13-darters hauled him with touching distance at 8-5.

Chances came and went for both men when De Sousa pulled a dart to lead 9-5, Chisnall pounced to win a fourth leg on the bounce and when De Sousa couldn’t take out 108, Chizzy was within one at 8-7. 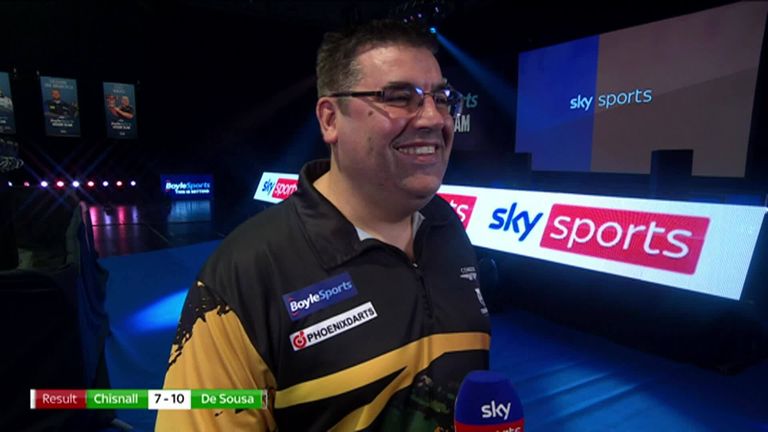 When the Englishman missed double 18 to level, De Sousa pinned the very same target to stand one away but a remarkable contest had a remarkable finish when Chisnall missed a dart at bullseye for a 170 to stay in the tournament.

De Sousa missed the bull for a 161 finish himself, but when Chisnall, who struggled on the outer ring all night, wasted two more to keep his hopes alive, the Portuguese Man O’Scores finally got across the line for his landmark moment.

Simon Whitlock remained on course for yet another showdown with Michael van Gerwen after coming through a nervy contest against Adam Hunt. 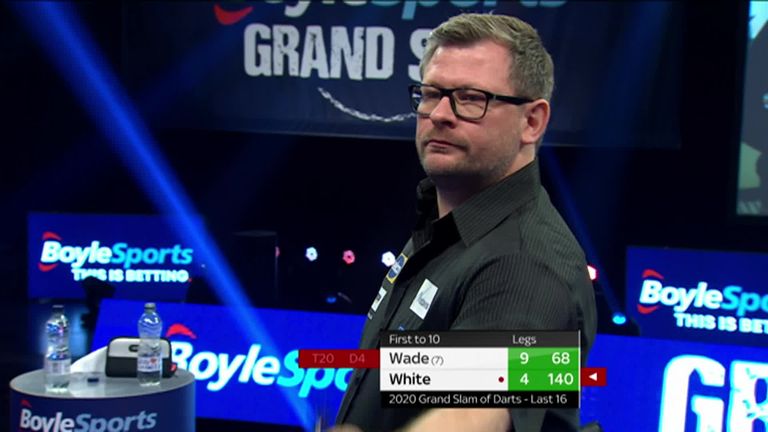 The Wizard has never gone beyond the quarter-finals and to do so will have to overcome Gary Anderson or MvG – and he may be one of the few men hoping for a Van Gerwen victory.

Whitlock beat the world No 1 in the World Matchplay and the World Grand Prix this year, but to make it a 2020 hat-trick, he will need to improve on a 10-6 win that saw him miss 26 darts at double. 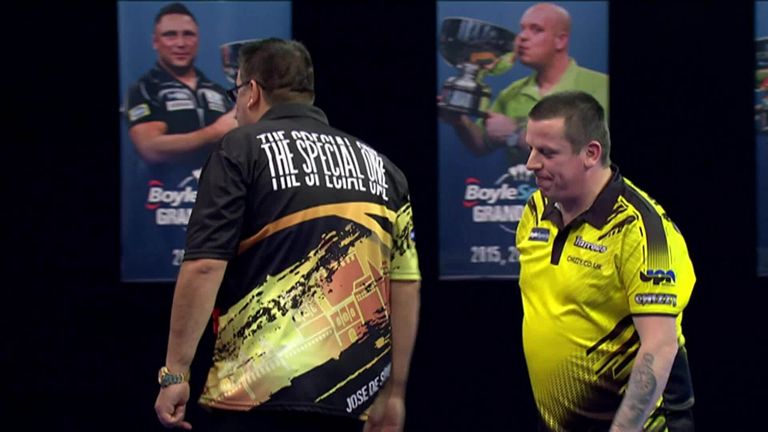 A nervy Hunt, in the biggest game of his career, watched on as Whitlock took out the first two legs in 21 and 15 darts. But inspired by a 112 finish, Hunt managed to stay in touch without ever really threatening Whitlock.

World No 91 Hunt can take credit from a gutsy display, having come through qualifying to take home the biggest cheque of his career, claiming £10,000 for reaching the last 16.

Don’t miss a dart from the Grand Slam of Darts on Sky Sports as the action continues on Saturday – join us from 7pm on Sky Sports Arena and follow us @SkySportsDarts for updates and clips throughout the tournament.