After starting their season with two heavy defeats, Giants coach Julie Fitzgerald says all her team needs is time.

The Giants play Collingwood at the Quaycentre on Sunday and Fitzgerald urged her players to build on the good things they did in last week’s loss to the top-of-the-table Melbourne Vixens.

“Even though we lost heavily [61-45], we were a better team than the week before [against the Swifts],” she said. “And that’s what we have to attempt to do again. We’re across what we need to do. I feel confident we can turn things around.” 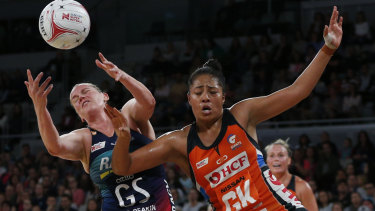 Eyes on the prize: Melbourne’s Caitlin Thwaites battles for possession with Samantha Poolman of the Giants last weekend.Credit:AAP

The Giants recruited Australian captain Caitlin Bassett from the championship-winning Sunshine Coast Lightning during the off-season, but Fitzgerald conceded the loss of Susan Pettitt, Bec Bulley and Serena Guthrie at the end of last season had been telling.

“We have to accept we lost three internationals from this team,” she said. “Even though we signed Caitlin, one international can’t make up for the loss of experience from three.

“I hate to use the word ‘rebuild’, but we are reshaping the team. I’ll never be happy when we’re losing, but I’m happy with the approach [the players have] had to the fact we’re not playing to the way we want to.”

Cheltenham Festival betting offer: Get £20 in FREE BETS with Betfair

Joshua Buatsi vs Daniel Dos Santos live stream: How to watch fight online and on TV