FOURTH OFFICIAL Mike Dean was not impressed with Pep Guardiola's antics during Manchester City's draw at Anfield on Sunday. 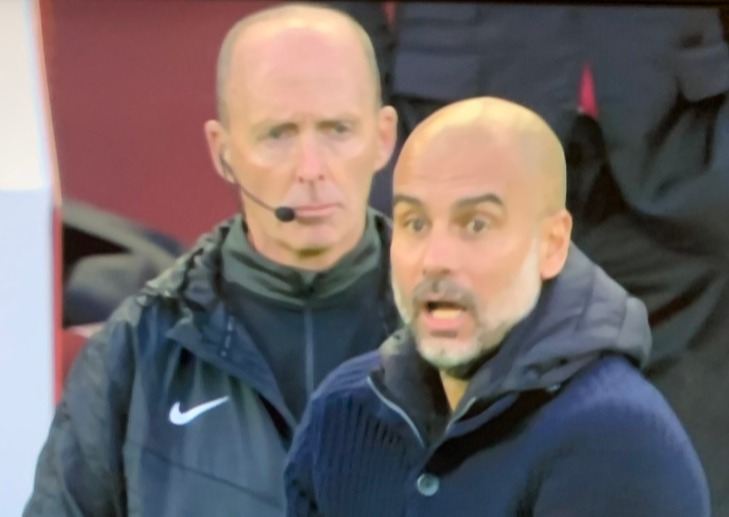 Milner, playing at right-back, was not shown a second yellow card by referee Paul Tierney after hacking down Bernando Silva.

Guardiola was left incensed by Tierney's reluctance to punish the blatant foul, which happened while the score was 1-1.

As the Spaniard jumped up and down the touchline, Dean – on fourth official duties – appeared to ignore his protests and just looked at him.

And it's easy to see why Guardiola was so annoyed as Mohamed Salah went on to score a stunning goal to give Liverpool a 2-1 lead.

City managed to get a late equaliser through Kevin De Bruyne – but they could have got all three points if Milner had seen red.

The result leaves City third in the table, two points behind leaders Chelsea.

Fans on social media were loving Dean's reaction to the Man City manager's theatrics, with one tweeting: "Vintage Mike Dean."

While another wrote: "Dean's probably wondering where Pep got his coat from."

And one supporter tweeted: "Mike Dean just motionlessly chewing his gum while Pep Guardiola ranted in his face was amazing. What a hero."

When asked about the decision after the game, Guardiola said: "It's a yellow card. It's clear.

"It's Anfield, it's Old Trafford. In our situation a City player is sent off. It's too much clear. It was a second yellow."