Helwani, who covers MMA, has nearly 950,000 Twitter followers and more than 1 million on Instagram. Many of Helwani's ESPN colleagues expressed support for him on social media over the weekend. Meanwhile ESPN, which is broadcast partners with White and UFC, was quiet until releasing a statement to USA TODAY Sports on Monday.

“Ariel is a valued colleague and an exceptional MMA reporter. His record speaks for itself," the network said.

Helwani had interviewed Carano, a one-time professional fighter, in the past and expressed his disappointment in her comments on Instagram. Carano had compared Republicans living in the current American political climate to Jewish people during the Holocaust. Helwani is Jewish. 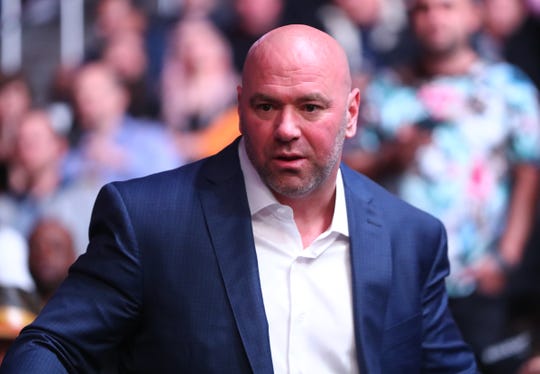 A number of @arielhelwani’s ESPN colleagues are defending him publicly. pic.twitter.com/batoeidLfk

Ex-ESPN radio host and personality Dan Le Batard, who recently left the company to start his own media venture alongside former ESPN boss John Skipper, criticized the network on Sunday.

"If @ESPN is interested in journalism, it can ask some questions here of bully and corporate partner @danawhite," he wrote from his show's Twitter account. "There is certainly a douche here. But it ain't the journalist @arielhelwani. Pick a side, ESPN. Quiet is complicit."

Emails to Le Batard on Monday were not immediately returned.