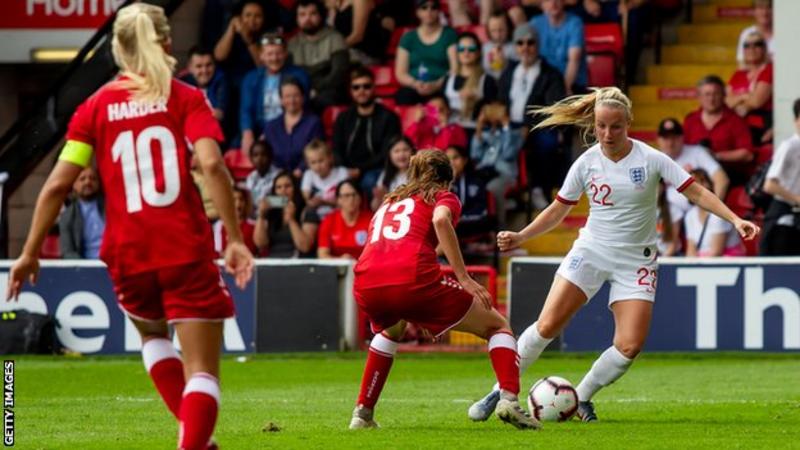 England manager Phil Neville says he gave the “biggest rocket” of his tenure to Arsenal forward Beth Mead and that his “tough love” has made her “want to go to the moon”.

The 24-year-old was named player of the match after the Lionesses 2-0 win over Denmark on Saturday after providing the assist for Jill Scott’s goal.

“She’s tougher. She has aggression and doesn’t give up,” Neville said.

“We’ve set her a challenge. Her delivery is as good as any in the women’s game, and we have her hitting 20, 30, 40 balls every day into areas. It’s working. But we’ve given her some real tough love.

“If there’s one player I’ve given the biggest rocket to, it’s her. It was in January, over the phone.

“We laugh about it now. She knew at the time. She didn’t argue back and made a promise to me she would make the improvements.”

Mead made her senior England debut in April 2018, little more than a year after joining Arsenal from Sunderland, and also contributed to Nikita Parris’ opening goal against Denmark – their penultimate game before the Women’s World Cup.

When asked about her telling-off from Neville, she admitted she had become “complacent”.

“He probably didn’t tell you everything he said to me,” said Mead.

“Sometimes as a player you need that, you get a bit complacent.”

‘Stop being too nice’ – tough love from the boss

Mead scored two goals in England’s victorious SheBelieves Cup campaign including a brilliant cross-cum-shot – or as Neville is calling it, a “crot” – against Brazil in February.

But despite that goal, Neville left her out of the starting line-up for the next game against the United States, and that is when, he says, he knew she was “ready”.

“She’s the nicest girl in the world – and that’s what I said, ‘stop being too nice’,” Neville said.

“I left her out for the USA game at SheBelieves and that was the first time she got angry with me. When she walked out of the room, I actually thought, ‘she’s now beginning to be a player’.

“She’d scored the ‘crot’, this unbelievable goal, and expected to play against the USA. I said, ‘you’re not playing, be ready to come in’ and she literally stormed out of the room, angry. And I thought, ‘job done, she’s ready now’.

“The anger I see in her now, the aggression and determination, and the practice. The penny has dropped.

Mead, who helped Arsenal to the 2018-19 Women’s Super League title, added: “I definitely believe it was the best thing for me and I think me and Phil are on a very good level right now.

“He got the best out of me and now I’m pushing to be better every day. I’ve always been a nice girl, but I’ve had to get a little bit tougher.”

The Lionesses play New Zealand in Brighton on Saturday in their final warm-up match before next month’s World Cup in France.

England play Scotland in their first group stage match in Nice on 9 June.

When asked if Mead is knocking on the door of England’s World Cup starting line-up, Neville said she is already “inside the door”.

“She’s ready to play,” he said. “She wasn’t six months ago. We had very harsh words with her.

“We had to really tell her a few home truths about somebody that was just probably at the level she was happy with, but we knew she could go to a different level. Working with Joe [Montemurro, Arsenal manager], we both had massive belief in her.

“Now we’re seeing someone that’s beginning to think like she could be a real threat for us in the World Cup.”

Mead added: “Now I’m pushing to be more than just in the squad.

“I want to be in that starting XI now. I want to give Phil the biggest headache on June 9, to be like, ‘I can’t not put Beth in this team’.”

BBC Sport has launched #ChangeTheGame this summer to showcase female athletes in a way they never have been before. Through more live women’s sport available to watch across the BBC this summer, complemented by our journalism, we are aiming to turn up the volume on women’s sport and alter perceptions. Find out more here.