The Miami Dolphins will discipline safety Bobby McCain for a verbal confrontation he had with a 13-year-old fan and for allegedly spitting at a Buffalo Bills fan following the team's 31-21 loss on Sunday.

Head coach Brian Flores said he spoke with McCain about the incident but declined to say whether he would miss any games, according to ESPN.

"I talked to Bobby about this morning. He and I had a pretty open dialogue. I heard his side of the story. It's unfortunate. I feel like he needed to handle that situation better," Flores said. "We're going to discipline Bobby for that. We'll handle that discipline internally." 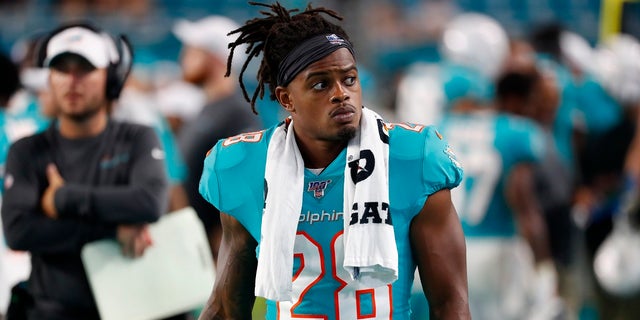 In this Aug. 8, 2019, file photo, Miami Dolphins safety Bobby McCain watches during the second half of a preseason NFL football game against the Atlanta Falcons in Miami Gardens, Fla. McCain will be disciplined by the team for his verbal confrontation with a 13-year-old boy who was rooting for the Buffalo Bills. (AP Photo/Wilfredo Lee, File)

"He's the nicest kid in the world," Wentland, a Bills season ticket holder, told the Buffalo News. "He's sat behind us for years with his dad. He was just having a good time I go, 'Dude, what’s wrong with you? What kind of role model are you for the kid?' "

Wentland said McCain ran up on him after the game and spit in his face while he was standing on a ledge at Buffalo's New Era Field overlooking a tunnel.

On Monday, McCain said he regrets his actions.

"I regret the incident that happened with me and the fan yesterday after the game," he told reporters. "I wish I would've handled myself better. I spoke with Coach Flores today. We're on the same page. We're looking forward to Pittsburgh and going through preparation."

The Erie County Sheriff's Office told ESPN it is investigating the incident. Investigators are working with the Bills and the NFL to review security video footage.

How to keep PPR scoring from ruining fantasy football forever