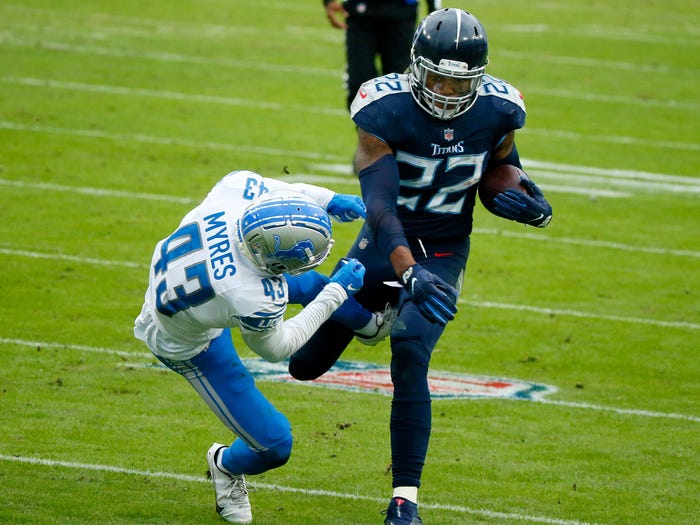 No player in the NFL strikes fear in the hearts of opposing defenses quite like Tennessee Titans running back Derrick Henry.

The league's leading rusher, Henry is averaging 109 yards a game, and stomped all over the Detroit Lions defense on Sunday to the tune of 147 yards and a score.

But while Henry's numbers are always impressive, you really need to watch him play to get the full effect of his dominance. On Sunday, he showed his strength with a vicious stiff-arm of Lions cornerback Alexander Myres.

With the Titans already leading 14-7 and threatening to score again, Henry took a handoff and turned upfield. Myres did his best to force Henry towards the sidelines, but was instead shoved into the ground by Henry.

On Twitter, fans were enthralled with Henry's incredible strength.

This isn't the first time Henry has sent a defender flying against their will. Earlier in the year, Henry sent Bills cornerback Josh Norman into the air with a similarly dismissive sitff-arm.

Tennessee went on to win Sunday's game against the Lions 46-25, all but securing the Titans' spot in the postseason. To any defenders that may face Henry in the coming weeks: consider yourselves warned.

The incredible Premier League comparison table that shows how badly Arsenal, Man Utd and Tottenham are doing – The Sun