The Ford outfit, forced to make aerodynamic alterations to their Mustangs after in-season testing by Supercars revealed the car had an unfair advantage over its Holden and Nissan rivals, charged to a third-straight one-two finish. 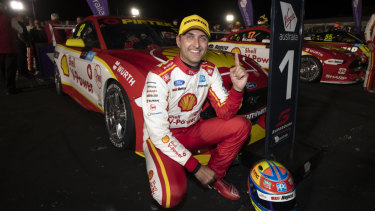 Fabian Coulthard secured his second win of the year with teammate Scott McLaughlin coming home second in the first Supercars race under lights at Barbagallo Raceway.

Team owner Roger Penske was one of many Ford heavyweights at the track to witness the success.

"Everyone's just relieved that the cars are good," said Coulthard, who now trails McLaughlin by 112 points in the championship standings. 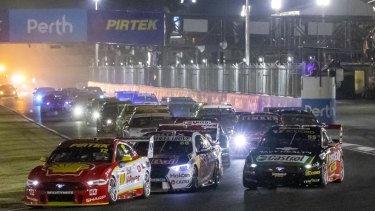 Slippery when wet: Fabien Coulthard jumped his fellow Mustang driver on the line and by the first corner Scott McLaughlin was back in fourth behind Jamie Whincup and Chaz Mostert.Credit:Mark Horsburgh – EDGE Photographics

"It was awesome to have Roger here, it always is … they get to see everything first hand.

"There's no better way to respond than the way we did with having three Mustangs on the podium."

McLaughlin had earlier claimed his seventh pole position of the season but the defending champion botched his start to be fourth by the first turn.

He used speed and strategy to get past Mostert and Whincup but couldn't catch his teammate.

The New Zealander had been an outspoken critic of the decision to further change the Mustang and admitted he'd been uncertain how the car would perform in Perth.

"It's relieving because obviously you come here and you don't know what you've got and whether you're going to be fast or whatever," he said.

"This is a great result to be able to get a trophy and to be able to pass Jamie Whincup and get third place, it definitely shows we're moving forward," he said.

The Perth SuperNight event wraps up on Saturday with a longer 83-lap race from 6.45pm (2045AEST).