Amid the 37 motions which will be voted upon at the GAA’s Congress this weekend, one of the most notable will focus on head injuries.

“A player who sustains a suspected head injury, if instructed by the referee, shall temporarily leave the field of play for further assessment before the player’s fitness to return is determined,” reads the potential new rule, which mimics the current ‘temporary substitute’ provision in place for blood injuries.

It comes across as a simple law, and one which is easy to implement.

But a great deal of research, debate and work went into arriving at this point, to bring it before GAA delegates this weekend.

“When you look at the rule that’s actually going to Congress, it might actually look quite simple and quite basic in what it’s spelling out.

“But you’d be amazed how much that has gone through the ringer in terms of wording, and simple things around responsibilities. Implementing it had to be very, very carefully thought out,” former Monaghan footballer and chairman of the GAA’s Medical, Science and Medical Committee, Dick Clerkin, explained to Sky Sports.

“We did have earlier iterations that were more complex, and trying to be too smart or too clever than they needed to be. You just ended up getting wrapped up in terminology and all the rest.

“So we went with a more simplified approach, using the template of the blood sub rule that works, and a similar pretence, which is to get the appropriate wording of the nature of the injury that we wanted to deal with it, and the cause around it. That was the end result.”

From concept to Congress

The committee’s term – which is aligned to that of the GAA President – ends this weekend, and this proposal is the culmination of three years of work.

With virtually every contact sport facing its own battle with head injuries and concussions in recent years, different steps are being taken by different sporting organisations.

“When we came in three years ago, it was very high on the agenda, but there wasn’t a huge amount around discussions and new rulings,” Clerkin outlined.

“It had been mooted on a previous committee, but there was nothing on the table, and there was no significant drive to do something. But as the years went on…thrashing out the issue and discussing it, and looking at what other sports were talking about, we felt that we had to look at how we could do more, to support players, coaches, managers, referees to try act on the issue of head injuries and concussion.” It was only going one way in terms of awareness and concerns, and we felt the GAA had to respond to that.

Clerkin knows the GAA had to adapt

In Gaelic games, allowing a temporary substitution would allow more time for an injured player to be assessed, and reduces the pressure on everyone involved.

“What the ruling does gives everyone involved a bit more time, away from the glaring eyes, and the pressure of making a decision almost immediately on the pitch, with everyone around you,” said the Currin club man.

“And it doesn’t put that concern in a player’s head that if he does come off, he’s out of the game, because that’s ultimately what players don’t want.

“That was my experience, and a lot of other players would recognise the same. If they had a little bit more time to assess themselves, and to be assessed if the support is there, it gives you the best chance to make the right decision.” Onus on the referee

Perhaps one of the more notable aspects of the rule is the onus placed on the referee to make the judgement on whether a head injury took place. This contrasts to rugby, where an independent medical expert makes such a decision.

But Clerkin stresses that handing the duty to the referee is a more suitable solution in Gaelic games.

“It is a GAA solution to a GAA issue,” he outlined.

“Making it as simple and applicable across all grades was what we needed to get. You have to remember that a GAA rule like this is not just for high profile, intercounty games, where you’ve got a very qualified, well-equipped medical backroom team. It has to be something that can be applicable at Junior B or underage level, where you mightn’t have that.”

Potential abuse of the rule?

Of course, there is a risk of teams looking to abuse such a provision. Should a team reach its maximum number of substitutions, they could possibly look to utilise this ‘temporary sub’ clause to get another pair of fresh legs onto the field.

It was a concern aired by the committee, but they feel it is a minor one – with the benefits still far outweighing the potential drawbacks.

“In theory, yes, and there’s no getting away from that. We did weigh that up as a potential risk,” Clerkin admitted.

“But ultimately, the benefit outweighs that.

“We were very conscious that the rule might be subject to abuse, if people suspected this might be a way to get in an extra sub, if there was no issue around head injury. This is where the referee comes in as an honest broker, and he has to be confident that there was an incident and there was genuine [injury].

“In reality, we feel this won’t be an issue. But you have to look at all potential risks around it.” 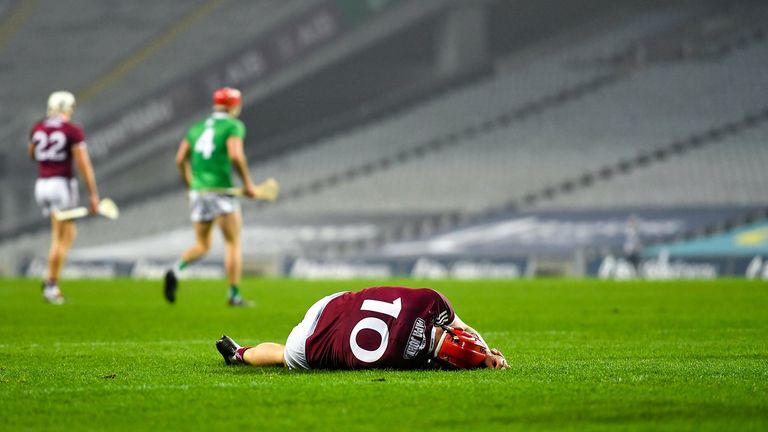 The motion’s chances of passing this weekend are believed to be high. However, its success would not be the end-point on moves to make the games safer when it comes to head injuries, but rather the beginning.

Clerkin is keen to see a standardised test implemented, when players are taken off temporarily to be assessed.

“The next step for us is to look [at] – where medical support being available, typically the intercounty game – a standardised off-field assessment, if there is somebody taken off,” he said.

“And that will be the natural next step after this rule. That’s something hopefully the next committee will be able to take on.”