Veterans Patty Mills and Joe Ingles have been named for their fourth Olympics as key members of Australia’s 12-man Boomers squad for the Tokyo campaign starting later this month.

With the absence of NBA superstar Ben Simmons confirmed this week, the Boomers are finalising their preparations to launch another assault an all-elusive Olympic medal in Japan.

Mills, 32, and Ingles, 33, are just one Games behind the feat of the legendary Andrew Gaze, who wore the green and gold at the Olympics between 1984 and 2000. 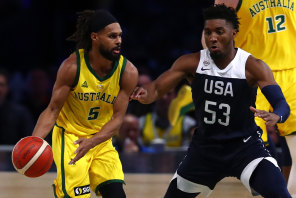 Head coach Brian Brian Goorjian, who returns to the job after leading the 2004 and 2008 campaigns, is energised by the opportunity ahead.

“I’m really excited, we’ve got some nice youth coming into the team, and a good balance,” Goorjian said.

“It’s very clear what the goal is. It’s not driven from me, I’ve walked into it and it’s hit me in the face. “That leadership group want a gold medal and if they don’t get it they’ll be disappointed. My job is to come in here and do everything I can to help them complete the vision.

“It’s huge having that experience. I’m in a unique situation where I was part of the Boomers in Beijing with Patty and Joe to come back close to 12 years later and see what the culture has become – the first two days of practice I just took it all in. Where it’s gone in that time, through that leadership group with Delly [Matthew Dellavedova], Baynes [Aron Baynes], Joe and Patty has been amazing to see.”