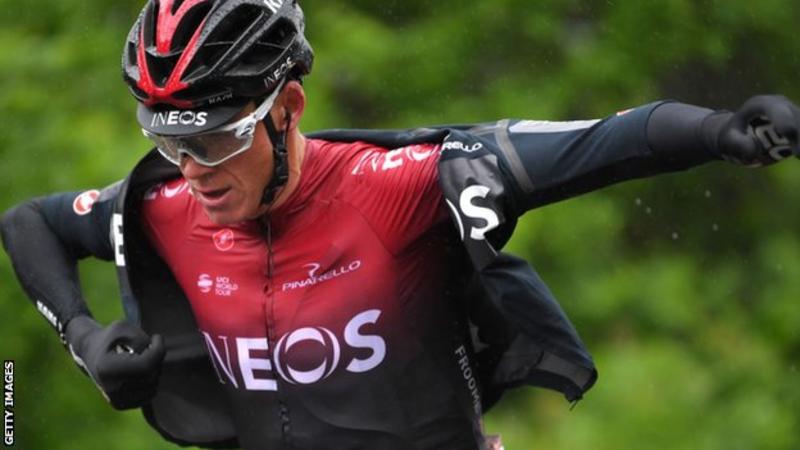 Britain’s Chris Froome is facing “at least six months” away from cycling, says the surgeon who operated on him after Wednesday’s serious crash.

The four-time Tour de France champion, 34, had a six-hour operation, which has been described as a “success”.

But chief surgeon Remi Philippot said it was “difficult to be sure” on an exact length of time for his recovery.

He added: “Maybe we will need to do other things. Maybe the rehabilitation will not be as we want.”

Doctors have said they are are “very happy” with Froome’s progress, and Team Ineos confirmed he will remain in hospital for the next few days.

The crash happened during a practice ride before stage four of the Criterium du Dauphine in Roanne, France.

In footage captured by ITV4 minutes before the incident, a team-mate tells Froome “you don’t have to take risks, Chris” as he takes both hands off the handlebars to put on a jacket.

But moments later, Froome took his hand off his handlebars again to blow his nose and was travelling at 54km/h when a gust of wind caught his front wheel, causing him to hit a wall.

He was airlifted to St Etienne Hospital.

“Chris woke up and was reviewed by the intensive care consultants and the orthopaedic specialist who operated on him and they’re both very happy with his progress to date.

“Chris will remain in hospital for the next few days for observation, but he is already actively engaging in discussing his rehabilitation options, which is very encouraging.”

Philippot also told BBC Sport: “Chris was totally awake – he wanted to know when he can cycle again.

“Professional sports people are very good mentally and want to win but maybe I think I have to slow him down because he’s very quick and wants to go fast but bone healing needs at least two months so we have to be patient.”

British former Olympic cycling champion Dani Rowe, who suffered a training accident in 2014 which left her with broken ribs and a collapsed lung, said returning from such a serious injury is a challenge for the mind as well as the body.

“It is really hard to come back from this kind of accident, I think mentally more than physically,” the 28-year-old told BBC Sport.

“There’s been some horrific injuries from this crash, but knowing Chris’ kind of mental strength and determination, he will definitely be back, I’m sure.”

Meanwhile, cycling’s governing body the UCI has announced that 2011 Vuelta a Espana champion Juan Jose Cobo had been found guilty of an anti-doping violation.

That could see Froome, who finished second in the race, retrospectively awarded the victory.