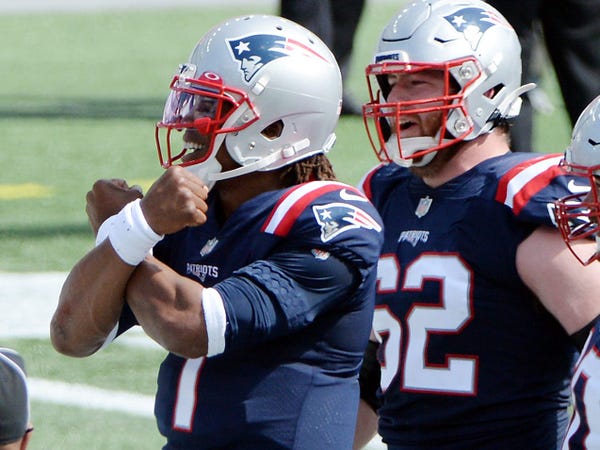 Cam Newton is already off to a hot start in New England.

The former Carolina Panthers star and newly minted Patriots quarterback scored his team's first touchdown of the season early in the second quarter of their matchup against the Miami Dolphins. Then he celebrated in flamboyant fashion, by throwing up the "Wakanda forever" salute in tribute to "Black Panther" and the film's lead actor, Chadwick Boseman, who died last month at 43.

Newton's TD came after he skirted around the Dolphins defense to run in a 4-yard touchdown with 13:12 remaining in the first half. After scoring, he pointed down at the Patriots writing in the end zone before spiking the football into the turf. Then, with his new teammates flanking him, Newton gave the salute.

Newton became a free agent after parting ways with the Panthers in tumultuous fashion during the off-season. Then in June, New England signed the speedy quarterback to an incentives-laden one-year deal to make him Tom Brady's successor.

Newton is by no means the first big-name athlete to channel "Black Panther" in a game. Shortly after Boseman's death, LeBron James threw up the cross-armed signal before a Los Angeles Lakers playoff game. Arsenal's Pierre-Emerick Aubameyang and F1's Lewis Hamilton also brought out the move the weekend Boseman died.

Club World Cup FREE: How to watch and live stream Flamengo vs Al-Hilal from Qatar online and on TV – The Sun