The sea blue pitch at the Oi Hockey Stadium is comprised of around 60 per cent sugar cane, recycled black rubber and a binding agent forged by carbon dioxide. Yes, this is the world’s first synthetic hockey pitch, a feat of engineering and sustainability.

It feels good underfoot and the ball runs up and down, and side to side. And like every other hockey pitch in the summer, it gets damn hot.

On Tuesday, temperatures were 36-degrees-centigrade by official measures. Water shot from there sprinklers during the regular match breaks seemed to evaporate before they hit the floor. The markings on the pitch reflecting like white-hot magnesium. The conditions, we thought, not conducive to anything resembling world-class hockey.

And yet, 60 minutes passed, more than three-quarters with great jeopardy, as Belgium triumphed over India in this first semi-final. The score of 5-2 will tell of a one-sided affair, but the only sustained brutality came from the sun.

Scores were level up to 53 minutes before Alexander Hendrickx rounded off a hat-trick to give Belgium a lead. India threw it all forward, leaving little at the back and were picked off accordingly.

Jerry Seinfeld once said the best thing about the Tokyo Olympics is watching the Opening Ceremony and nodding along as countries walk out, looking and acting as you would expect. It’s a joke that landed better in the early nineties than present day, not least given how first, second and third-generation immigrants are thriving so spectacularly at Tokyo 2020.

An Ethiopian-born woman is one gold into a three-pronged assault on middle- and long-distance titles while wearing the orange of Netherlands. On Tuesday evening, a 21-year-old Louisiana native is expected to return a first pole vault medal since 1952 for Sweden, the country of his mother’s birth.

However, what has been noticeable in sport as a whole, more specifically those that rely heavily on physical fitness, is how homogenised the top levels have become. In football, rugby, and a little bit in hockey, greater professional and, thus, improved fitness across the board has shown how the simplest things done as quickly, as long and as often as possible is a universal route to team sport success. As athleticism bounds on, the scope for creativity narrows.

That is why this meeting between Belgium and India, Western Europe and South Asia, felt like the best of Olympic competition. The meeting of two distinct styles from different parts of the world, both proven routes to success – ranked second and third in the world – showcasing enough speed and subtlety to satiate enthusiasts of both. Never once asking you to choose between the two. Beyond flag allegiances, there are no philosophical sides you need to take. 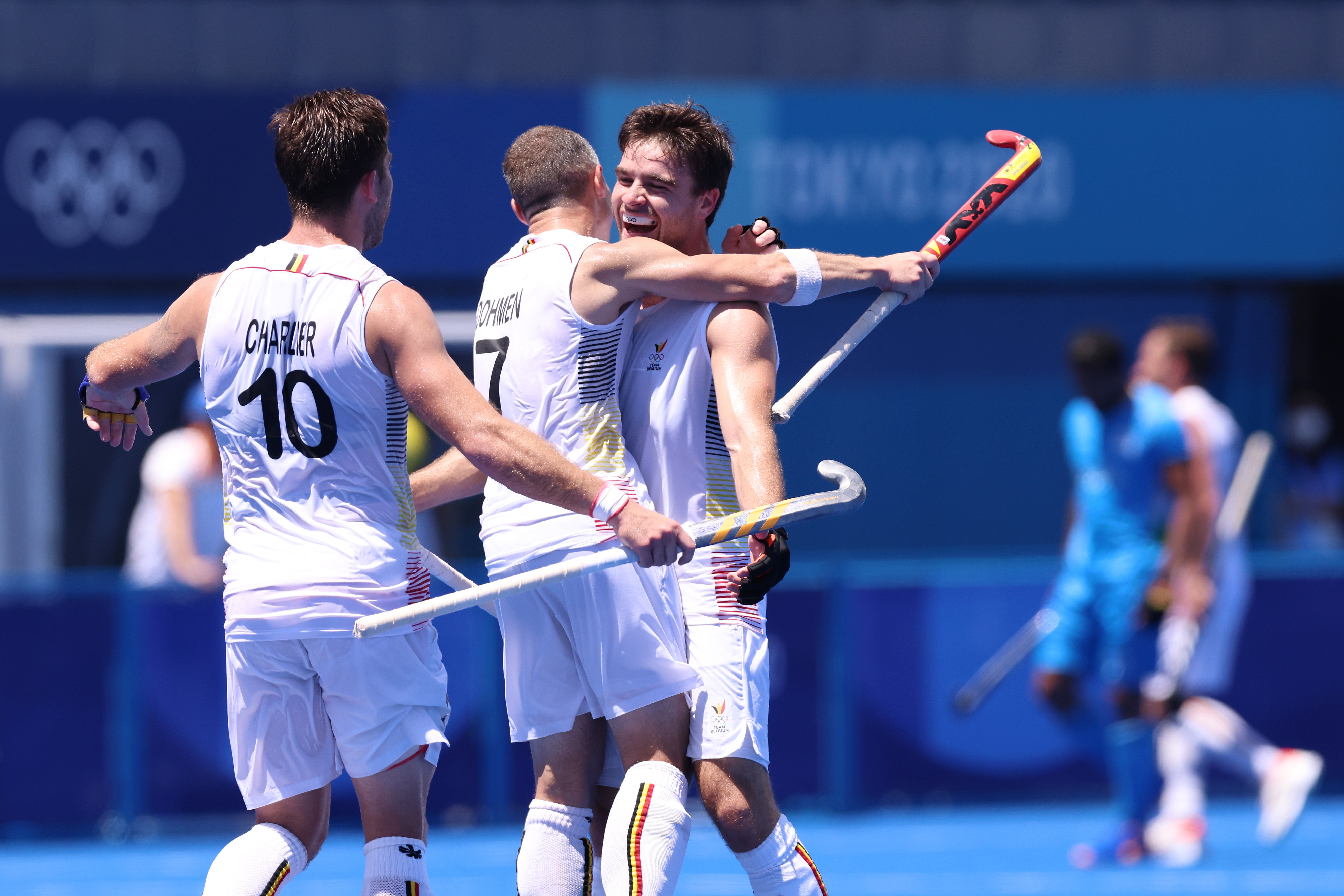 Not that these two are unfamiliar with each other across four quarters. They met earlier this year, in March, and three times in 2019. India won them all, though they were not necessarily “first string” contests. As such, this was to be the best example of stick work and big-game nerve.

It was hard not to look upon Belgium, reigning world champions, and not see a group of cyborgs in sleeveless white tees, shifting up and down the pitch with the kind of abandon that made you doubt the digital thermometers, where “real feel” was above forty-degrees-centigrade. Efficient passing, calculated movement is their way, a total of 29 goals in their five Group B games and their 3-1 quarter-final victory over Spain very much the expected end result. That tally is now 34 in six.

It was always going to be that India needed to counter that firepower by attempting to match it, shot for shot. And perhaps the best result for us watching on was they attempted that by harnessing their own brand of hockey.

Belgium took the lead in the second minute with Loick Luypaert’s penalty corner, but Harmanpreet Singh equalised with one of his own five minutes later before Mandeep Singh gave India the lead.

Jai Ho was still echoing off the empty when Mandeep let the ball slide across him with his back to goal before tomahawking it into the bottom corner. A difficult strike – stick reversed and almost hacked into the ground to meet the middle of the ball as level as possible – made to look rudimentary by the 26-year-old. 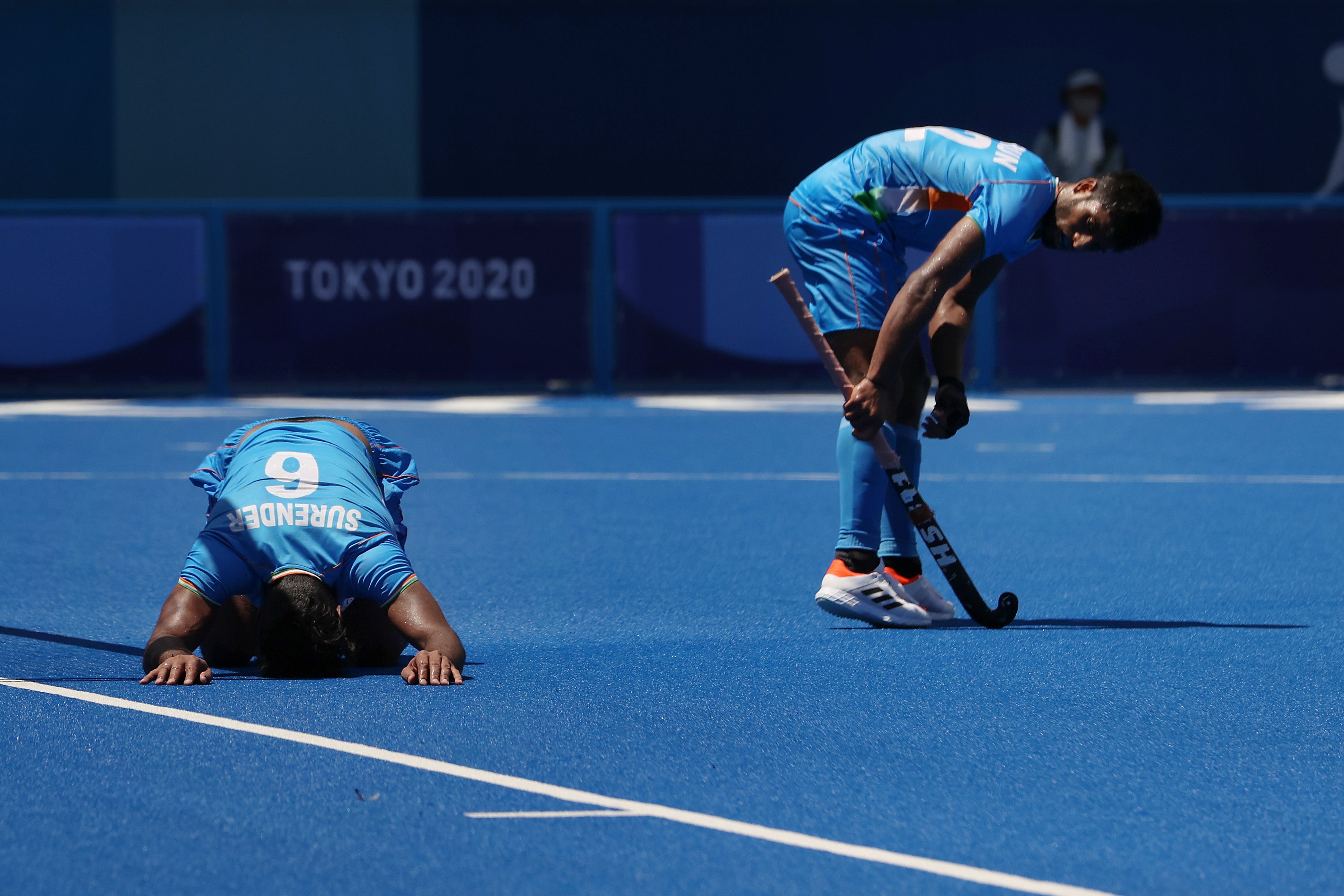 Mandeep embodies a modern Indian style: clean handling and a flair that, at times, made it seem he had a diamond-topped cane in his hands as he strutted past defenders with knowing grace. He was also a willing mover, either dropping back to act as a nuisance between the lines in front of the Belgian D or providing an option in the left channel. His graft was replicated elsewhere and, certainly for the first quarter, there was a sense that they could striker further as Belgium laboured.

The problem was Belgium did not labour for long. Hendrickx got his first, scoring the last of four penalty corners awarded in the space of a couple of minutes. With that, the beast was awoken, and but for solid right hand from Dilpreet Singh, Sebastian Dockier would have completed the goal of the tournament, on the end of a move that began deep in Belgium’s half and, via five crisp exchanges, presented him with an opportunity in the left of India’s D.

It remained 2-2 into half-time and throughout the third quarter which is, perhaps, where India should have done more. Both sides were watchful, with a solitary shot each, but Harmanpreet left these 15 minutes rueing a drag flick that struck the post.

But Belgium’s persistence eventually gave them the lead. A green card for Manpreet reduced India to 10-men and demanded more from already drained legs. When he returned to the field two minutes later, Hendrickx opened his body up to find the far corner to put his side 3-2 up. 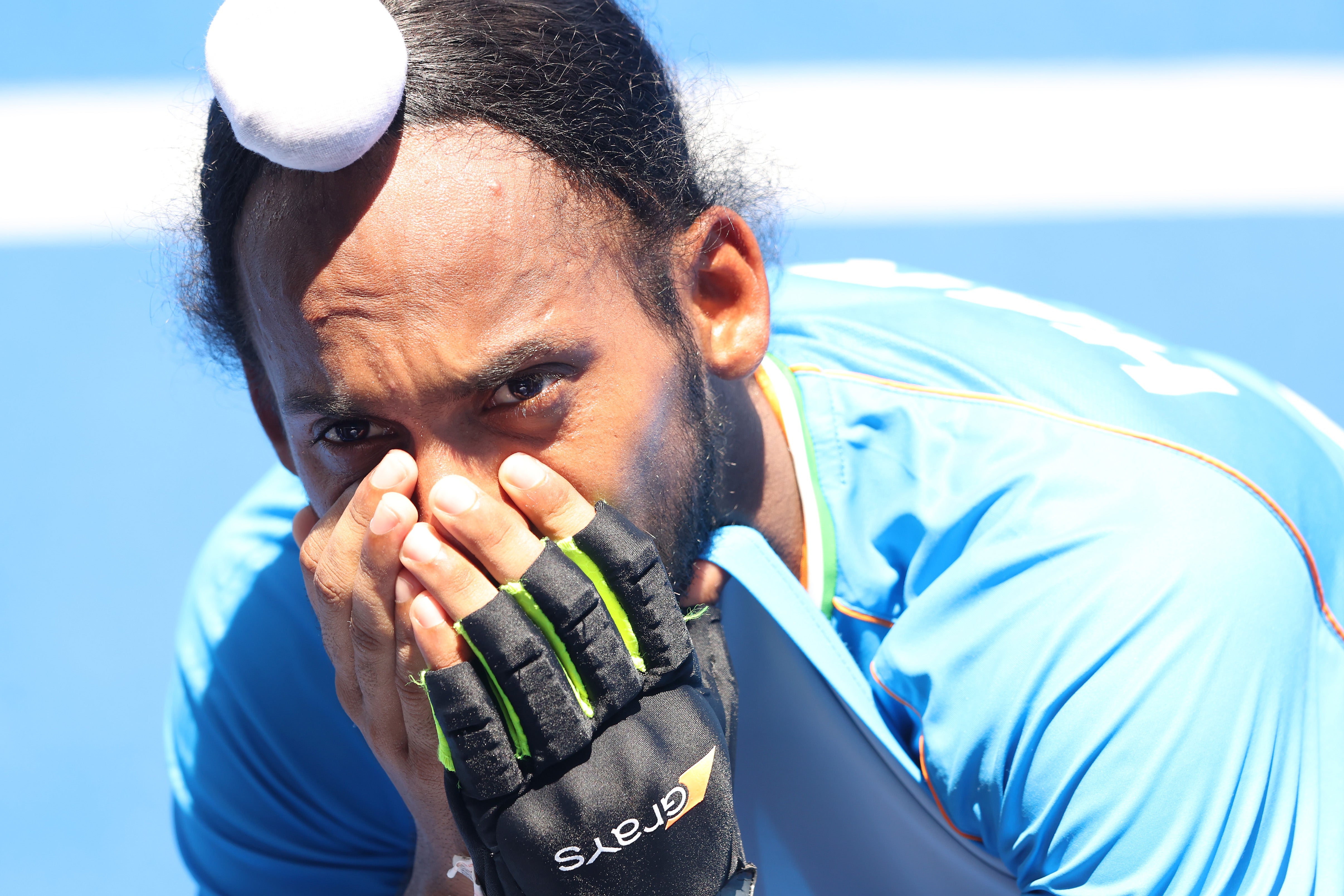 The search for the knockout blow duly came with four minutes left when Hendrickx flicked his penalty stroke between the legs of Dilpreet to complete his hat-trick. The keeper was then pulled for the extra outfield man and watched on from the sidelines as the goal that was once his was breached for the fifth time when John-John Dohmen exploited the empty net with six seconds to play.

It was at this point players on both sides came together to shake hands. And once a token restart allowed those remaining seconds to drip away, both groups came together again to congratulate and console, with the odd player in white lifting one in blue laid out on the floor exhausted.

For Belgium, the next focus is going one better than Rio and picking up gold for the first time, and becoming concurrent Olympic and World Champions.

India, meanwhile, are still in with a shot of medalling for the first time since 1972 with a bronze medal match against the loser of Australia and Bronze to come. 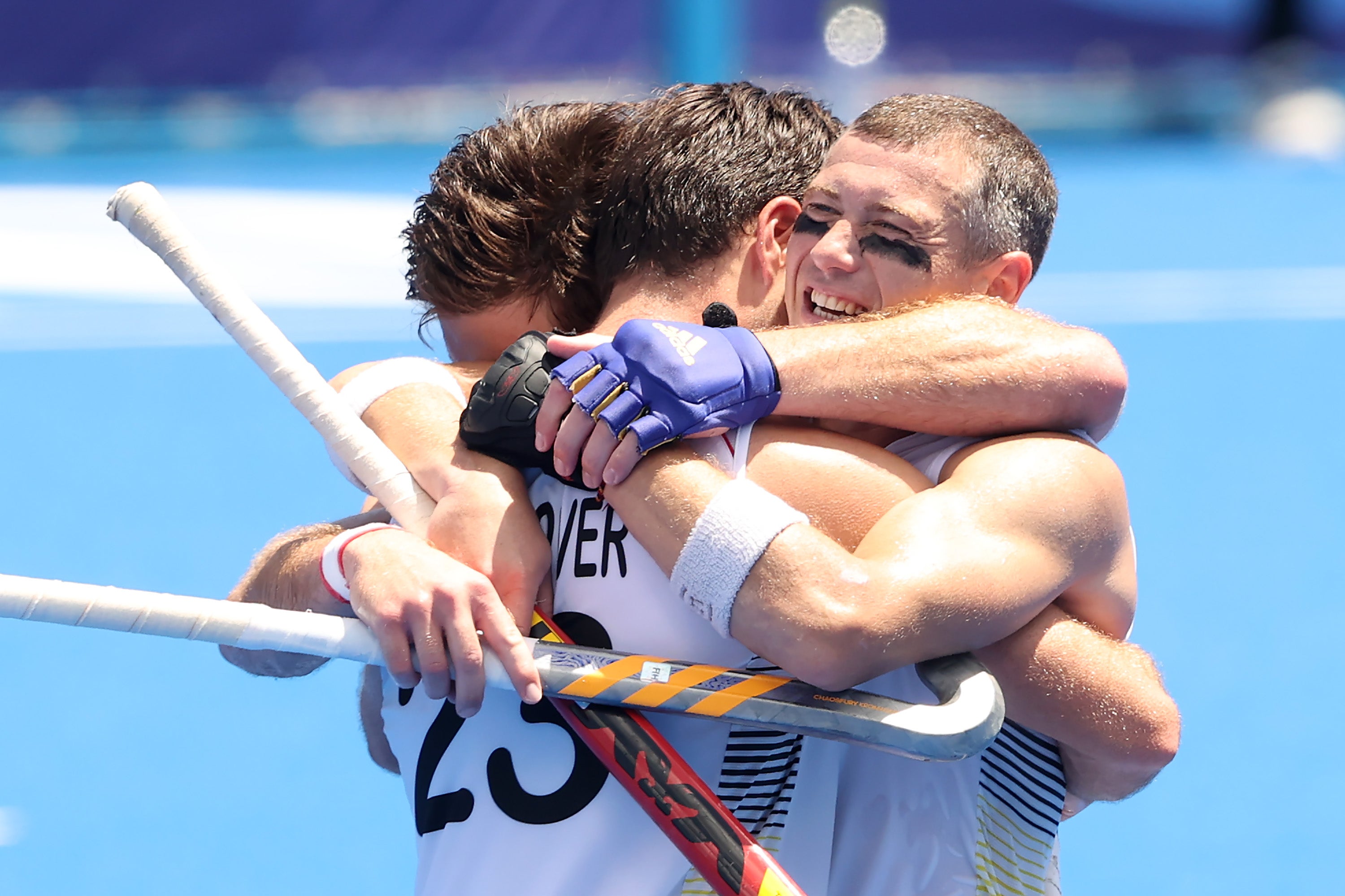 The country will now turn its focus to the women on Wednesday as they take on Argentina in their own semi-final. Another battle of contrasting approaches, this time between South America and South Asia, all bound by common ambition and an undiscriminating, unpretentious love of the game and each other’s.