When Olympic javelin throwers launch, the first thing you think is that the spear is going to fly all the way out of the stadium. The second, as it descends, is that it’s going to go through one of the officials converging at its landing place. At night, it is particularly beautiful, like “threading a needle through the sky”.

Those last words belong to Kelsey-Lee Barber, who threaded her needle through the sky into a bronze-medal position in Tokyo on Friday night. 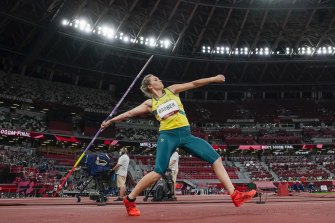 Kelsey-Lee Barber started well in the final of the women’s javelin, and steadily got better.Credit:AP

The reigning world champion had been beset by injuries since her win in Doha in 2019. A return to form in the qualifying rounds set up an impressive night, not only for Barber, as it turned out, but for Australian athletics.

Australia entered the women’s javelin final with strength in numbers. Barber was backed up by Kathryn Mitchell and Mackenzie Little, who both finished in the top eight.

At one point in the competition Barber had to pause to watch two other Australian women, Linden Hall and Jessica Hull, run past them in the 1500m final. Earlier, Ash Moloney had stood on the podium to receive his decathlon bronze medal. All will be reaching their prime competitive age in three years in Paris.

It was a night, as it has been a meeting, for emerging athletics nations. The Bahamas won their second 400m gold medal and Italy took out the men’s 4x100m relay. Giants Jamaica and Kenya were winners, as were Uganda and China. Once again, the United States were absent from the winners’ list, though sentimental favourite Allyson Felix reprised her golden years with a third place in the 400m final.

Italy on their way to winning the men’s 4 x 100m relay.Credit:AP

It was Barber who cut through for Australia. “I love being an athlete, I love the event, and I just wanted to make the most of it,” she said later, her beaming smile all but breaking through her face mask.

China’s Shiying Liu posted an early throw of 66.34 metres which put pressure on the field and ended up unsurpassed through the following rounds. Barber consulted her husband and coach Mike Barber in the expensive seats behind her, and each thrower was seeking advice. Something better, presumably, than “That way, and as far as you can”.

Barber started well and steadily got better. Her second throw, delayed so she wouldn’t wipe out the circling men’s 5000m final field, yielded a satisfied puff of the cheeks and moved her into third place at 63.69 metres. The other prime dangers, aside from the Chinese competitors Liu and Huihui Lyu, were Poland’s Maria Andrejczyk, and Turkey’s Eda Tugsuz.

With her second throw, the Pole vaulted into second place, where she remained all night.

None of the contenders could improve until Barber sent her fourth throw 64.04 metres, which seemed a safe third until Tugsuz sent her final throw into space, around the 64-metre mark, putting Australian hearts in mouths. Barber said she was unconcerned.

“I was fighting for a gold medal,” she said. “I wasn’t trying to stay in third. If Eda went past me, I was like, ‘I’m going past her.’ I was aware of what was happening but I wasn’t invested in what was happening.” 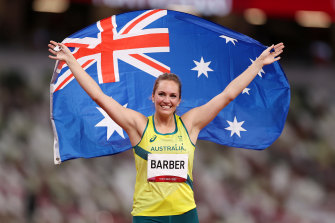 Kelsey-Lee Barber celebrates her bronze medal in the javelin.Credit:Getty Images

Tugsuz’s throw hit the ground precisely four centimetres shorter than Barber’s, and when Lyu’s final effort fell short, Barber could take her final attempt without fear of losing a medal. She gave the modest crew of Australian support a wind-up, ran in and delivered her best throw of the night, a 64.56-metre effort that almost took her from bronze into silver.

She grabbed an Australian flag, which opened the tap on her tears, and completed a winners’ lap with Liu and Andrejczyk. It capped a splendid comeback for Barber, who is now firmly established among the elite in her sport. “I don’t think I wore my world title into this meet,” she said. “The Olympic title was up for grabs tonight”.

Never miss a medal or great sporting moment with our Olympic update emailed daily. Sign up for our Sport newsletter here.