Home » Sport » Andy Ruiz Jr. says 'I call the shots now' when it comes to organizing an Anthony Joshua rematch

Andy Ruiz Jr. has warned Anthony Joshua and the beaten heavyweight’s promoter Eddie Hearn that they no longer call the shots when it comes to championship boxing in the division.

Joshua boxed sluggishly in his American debut in New York City on Saturday. He was knocked down four times and stopped in the seventh round whenthe referee waved the fight off because Joshua was non-responsive while trying to balance himself on the top ropes in a neutral corner.

Hearn said after the loss that his company, Matchroom Sport, isplanning to secure a rematch in the UK in November or December, so that Joshua can attempt to win back his belts. 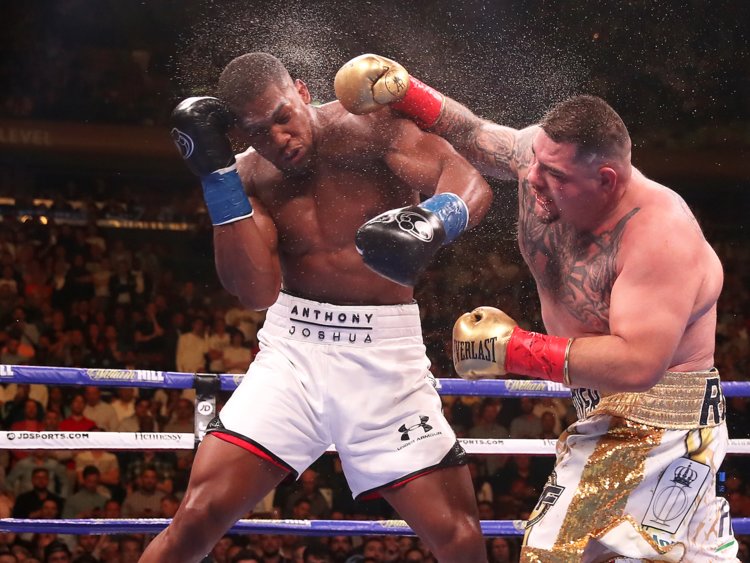 But Ruiz Jr. has warned Hearn and Joshua that now he is the champion, it is he who calls the shots, and that though he would welcome a second fight, he would prefer a rematch take place in Los Angeles or Mexico.

He toldDJ Dubbz on YouTube that he does not “want to let these belts go easily” and to keep them in his possession he will “work hard, stay disciplined,” and talk to his manager Al Haymon.

Ruiz Jr. believes he has “the upper advantage” when it comes to rematch discussions. He said he would love to have it in New York City again, “or in LA,” adding: “I’m the champion … I call the shots now.”

ToSky Sports, Ruiz Jr. said he is planning to parade the world titles in his hometown of Imperial in California, and is desperate to fight in Mexico. “I’d love [the rematch] to be in Mexico. There’s never been a heavyweight boxing champion in Mexico so I’d love to have it there.”

Read more:Anthony Joshua’s humiliating setback proves he should have listened to Floyd Mayweather 2 years ago

Speaking totalkSPORT on Monday, Hearn said he will provide details about a rematch “very soon.”

He said Joshua will “be back better and stronger than ever,” adding: “This rematch is gonna be a huge, huge fight.”