Home » Sport » After Man Utd star Anderson retired from football, check out our weirdest XI of players to have won the Champions League – The Sun

MANCHESTER UNITED'S former midfield schemer Anderson retired from the game in September at the age of just 31 as the proud owner of a Champions League medal.

The Brazilian spent eight years at Old Trafford, with the latter seasons blighted by fitness issues that heavily reduced his importance to the team. 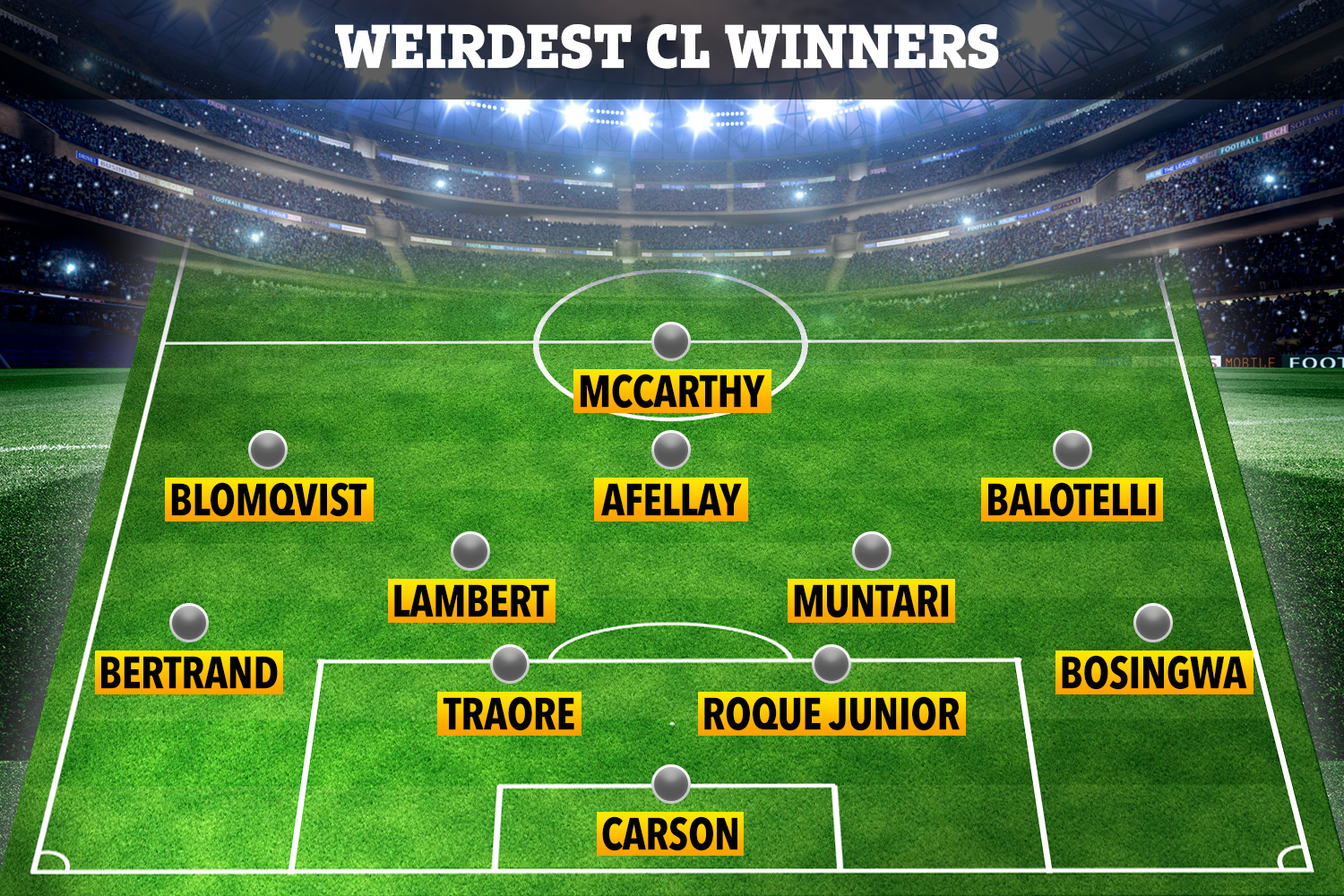 Reduced to a figure of fun, it is easy to forget that Anderson scored a crucial penalty in the shoot-out victory over Chelsea in the 2008 Champions League final in Moscow.

After the former £20million man bowed out, we took a look at an XI of the strangest players to have ever won Europe's biggest club competition.

For a Champions League winning England international goalkeeper that plays for Manchester City, it's easy to forget about Scott Carson.

The 34-year-old is now a rarely seen figure at the Etihad, but back in 2005 picked up a medal as an unused substitute for Liverpool in the final as the Reds made an astonishing comeback from 3-0 down in Istanbul.

Carson might be most famous for his clanger against Croatia for England that cost his country a place at Euro 2008.

But the stopper played the full match in Liverpool's 2-1 quarter-final first leg victory against Juventus on their way to that memorable Istanbul triumph.

Incredibly the monobrowed Portuguese won the trophy twice in his career.

Jose Bosingwa was part of two unlikely tales of an underdog rising up to win the biggest trophy around.

He first achieved it with Jose Mourinho's Porto in 2004, before featuring 11 times in Chelsea's unbelievable run to glory back in 2012 – even playing 120 minutes in the final.

The 37-year-old was then relegated with neighbours QPR, before rounding off his peculiar career in Turkey.

Roque Junior had an incredible career it turns out.

But then he went to Leeds.

The Brazilian defender arrived in England with the pedigree of a World Cup and Champions League winner – picking up a winner's medal as Milan beat Juventus in 2003.

Junior then had a disastrous spell on loan at Elland Road in 2004 – losing all five league matches he appeared in, conceding 20 goals and getting sent off against Birmingham in the process. 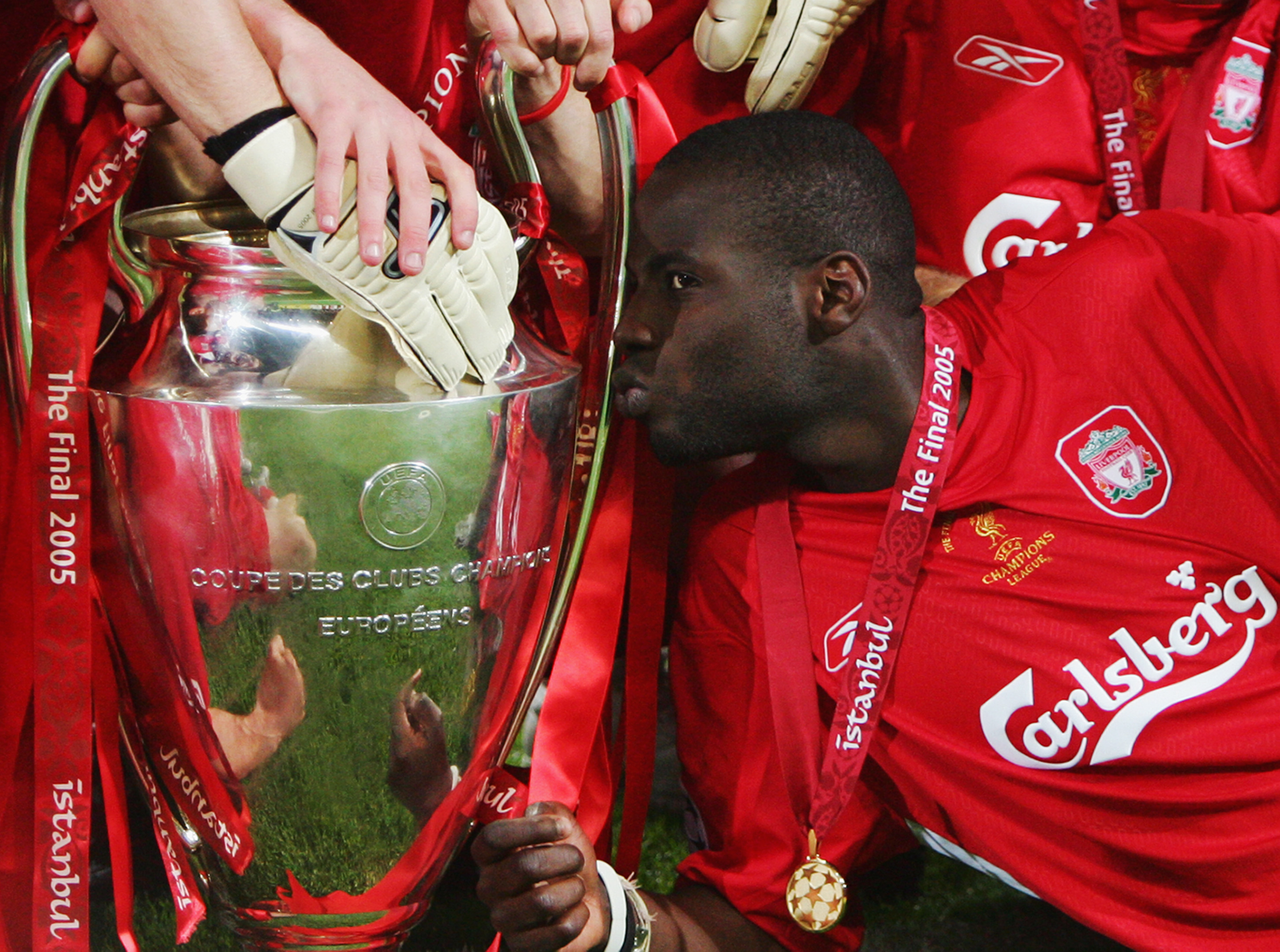 There was a reason the Liverpool fans used to sing that he couldn't control his feet.

Centre-back turned left-back Djimi Traore will always be remembered for a farcical own goal that he scored for the Reds against Burnley – but the Malian has his Champions League medal at home to comfort him.

The 39-year-old started the 2005 final before going on to finish his career in America.

Another from Chelsea's miracle run in 2012.

Ryan Bertrand made history by becoming the first player ever to make his Champions League debut in the final.

The Blues academy graduate played 73 minutes as his Didier Drogba-inspired team went on to lift the trophy.

He featured just three more times in the famous competition the year after before moving to Southampton. 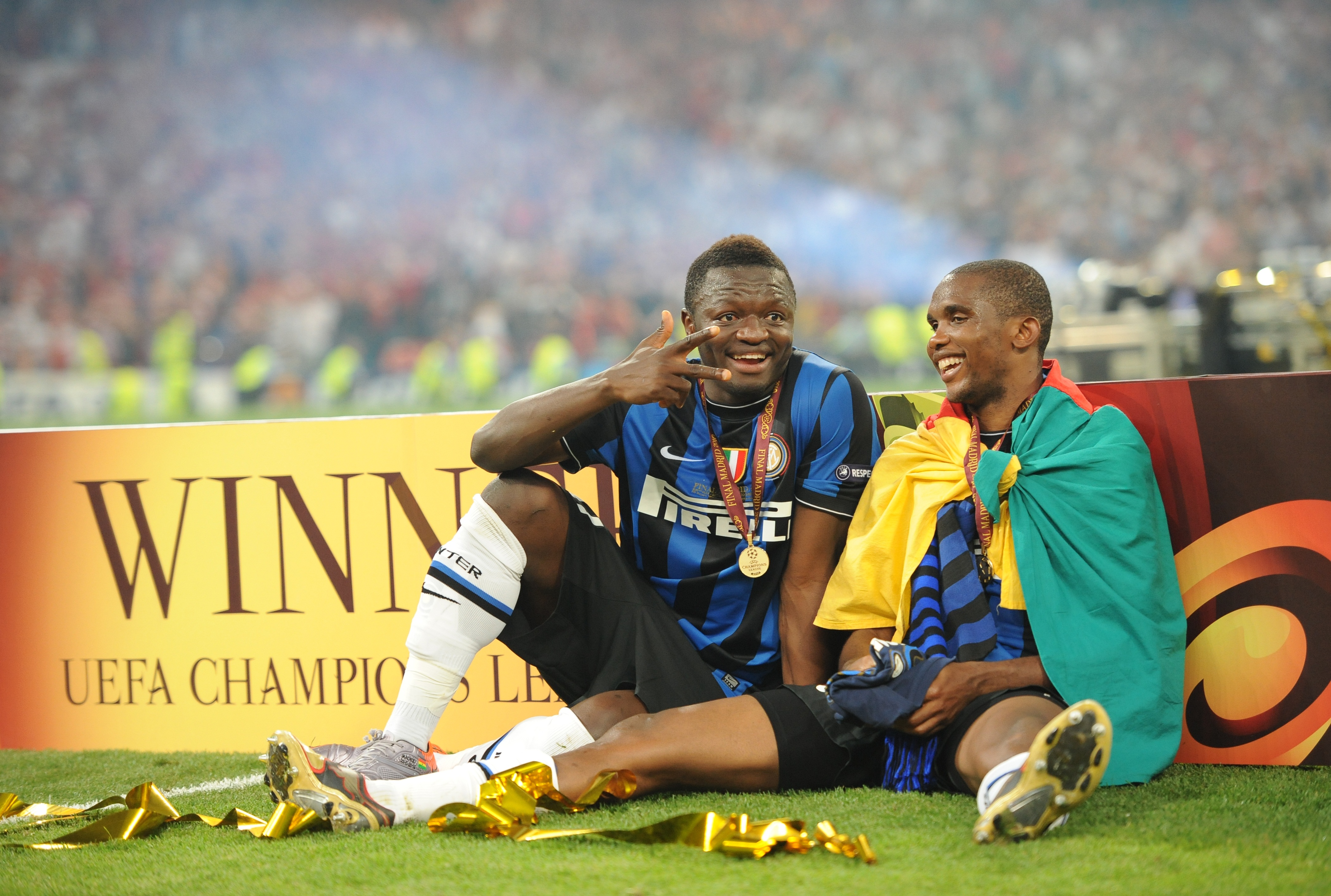 Sulley Muntari will forever be remembered in England for his one amazing year in the Premier League at Portsmouth under Harry Redknapp.

While the 72-year-old seemed hell-bent on reuniting with the Ghanaian at Tottenham, Muntari was busy winning the Champions League with Jose Mourinho's Inter.

Muntari did eventually return to the Premier League for an unmemorable loan spell at Sunderland – before joining Inter's city rivals AC Milan in 2012.

The 35-year-old is now a free agent and was most recently seen making two appearances for Albacete in La Liga 2.

It's easy to remember Paul Lambert in only his managerial guise – the dour Scot who tries not to get you relegated (with mixed results).

But the current Ipswich boss was a tremendous player.

The legendary former manager Ottmar Hitzfeld signed Lambert for German giants Dortmund from Motherwell, and under a year later he played the full 90 as der BVB defeated Juventus 3-1 in the 1997 final.

He then made himself a hero during eight years at Celtic, before a brief spell at Livingston brought the curtain down on a successful career.

He might not have played on the right wing that often – but Super Mario just had to make this team.

Before the wonderful madness that ensued during the Italian's time at Manchester City – Mario Balotelli was making Jose Mourinho tear his fast-greying hair out at Inter back in 2010.

And the Italian featured eight times on the way to Inter's triumph against Bayern that capped off a remarkable treble for Mourinho's men.

The 29-year-old has now returned to Serie A with Brescia. 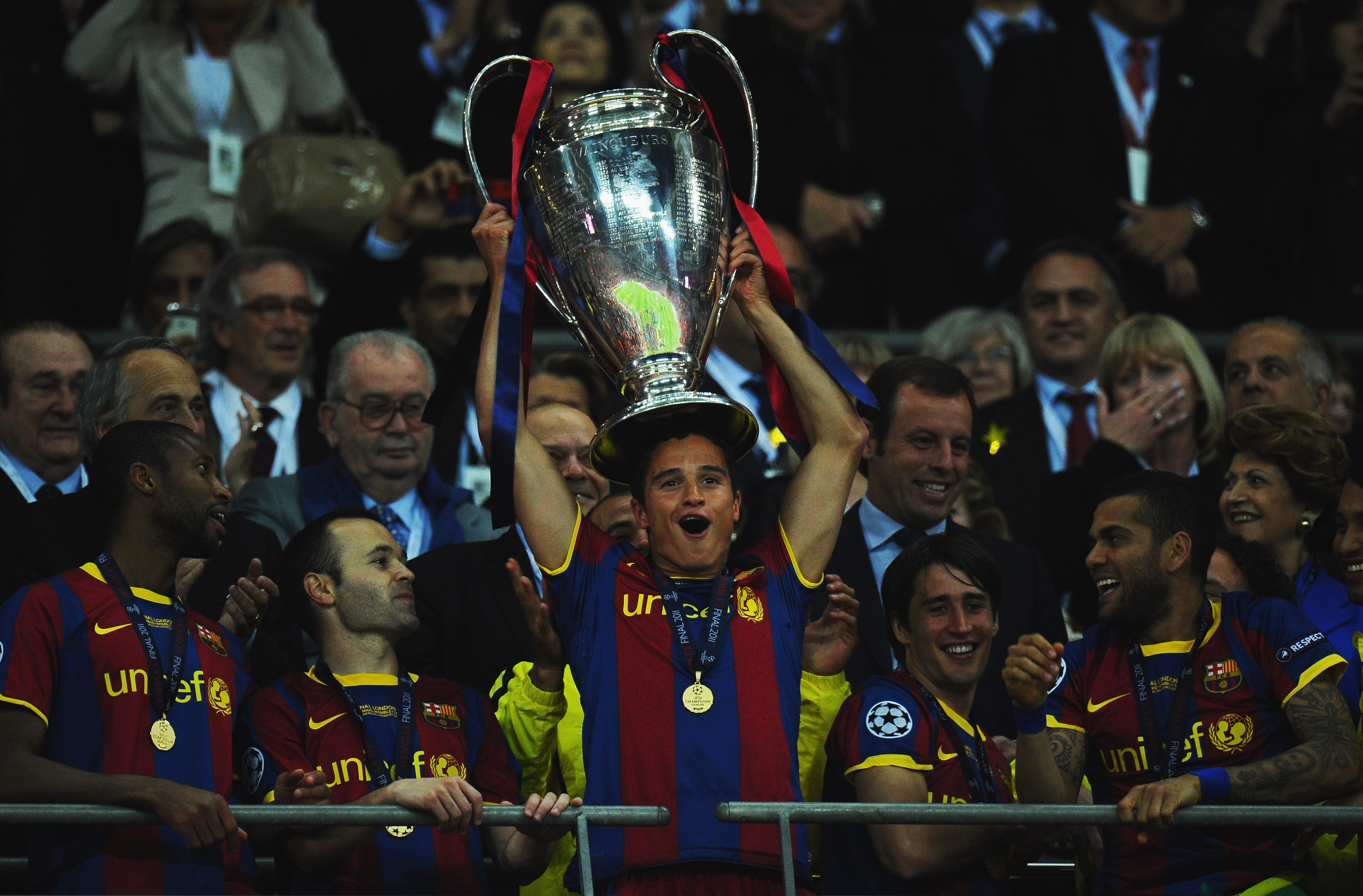 Even more remarkably, he won the Champions League with Barcelona back in 2011.

The 33-year-old has endured rotten luck with injuries over the last few years – but in 2011 he was part of Pep Guardiola's Barcelona side that many consider as arguably the greatest of all time.

He even came off the bench in the Champions League final against Man United in what was a chastening 3-1 defeat for Sir Alex Ferguson's men.

The left-winger wasn't the most memorable member of United's legendary treble-winning side back in 1999 – but was handed a start in the final by Ferguson.

Bans for Paul Scholes and Roy Keane meant that the Scot had to shuffle his pack, with David Beckham moving into central midfield and Ryan Giggs playing wide right.

Stoppage time goals from Teddy Sheringham and current Red Devils boss Ole Gunnar Solskjaer handed United one of the crowning nights in their club's history – and Blomqvist played his part.

The Swede left United soon after for an uneventful spell at Everton – before going on to play for Charlton, Djugarden, Enkoping and Hammarby.

He now owns a pizza restaurant in Stockholm.

McCarthy also won the Golden Boot in Portugal that year as his side won the domestic title as well – in an unprecedented period of success in the club's history.

The South African's importance in Europe waned as the year went on, however, and he was dropped by Mourinho for the final.

He eventually came to England and was briefly prolific under Mark Hughes at Blackburn, before a woeful spell at West Ham.

Ariel Winter and Sarah Hyland on growing up on ‘Modern Family’: People love to attack women