Jurgen Klopp’s team now tackles Tottenham Hotspur in the finalon Saturday, June 1. It is the second consecutive final Liverpool has played in, and the ninth in its history. But for Spurs it represents the biggest match it will have ever played.

Read more:Mauricio Pochettino broke down in tears and said ‘thank you football’ after watching Tottenham Hotspur advance to the Champions League final

The industry is overwhelmingly siding with Liverpool in the build-up, with former Champions League winners Ronaldo, Davor Sukur, and Alessandro del Piero all picking the Reds to win at the Wanda Metropolitano in Madrid, Spain,according to UEFA.com.

The former UEFA Cup winner Danny Murphy, an alumnus of both Liverpool and Tottenham, is no different, telling Business Insider at a pub in London on Friday that “Liverpool are the better team, generally.”

Promoting Greene Kings’ Summer of Sport campaign, he said: “Liverpool can dig results out … over the 90 minutes with Liverpool’s tenacity, fitness, and quality, the whole occasion might just get to Tottenham, and it won’t for Liverpool.”

Michael Cox, author of “Zonal Marking: The Making of Modern European Football,” agrees. Cox told BI that Spurs “start second favorites” because of the great points differential between the two sides in the 2018-2019 Premier League table, and the fact they were beaten twice by Liverpool this season. “Liverpool are a very outstanding team and yeah, strong favorites for me,” he said.

[Kane’s game] will be about him creating space for others … it’s a gamble worth taking.

But this does not mean Spurs cannot spring an upset.

Tottenham has two advantages it can exploit. First, Spurs boss Mauricio Pochettino must decide on whether or not to gamble by giving a starting role to club striker Harry Kane.

The Englishman has not played competitive soccer since April, when he left Tottenham’s stadium on crutches having injured himself in the team’s 1-0 win over Manchester City. He was not expected to return before the end of the season but after the miraculous comeback win over Ajax last month,said he’d be healthy enough for the final.

If Kane starts, how match fit is he? For Murphy, regardless of how long he would be able to compete on the night, he is a player who simply must start. This is because he’ll be able to cause the Liverpool defender Virgil van Dijk “more of a problem than he would have if Kane didn’t play.”

Cox added that it has its tactical advantages. “It’s a difficult task for Kane … but he’s a player defenders have to dedicate a lot of their focus to, and it will be about him creating space for others.

“His all-round game, touch, and hold-up play is excellent and it will be about him bringing the best out of other people. He may only play 50 to 60 minutes, but I definitely think it’s a gamble worth taking.”

Alexander-Arnold ‘has switched off defensively’ at times 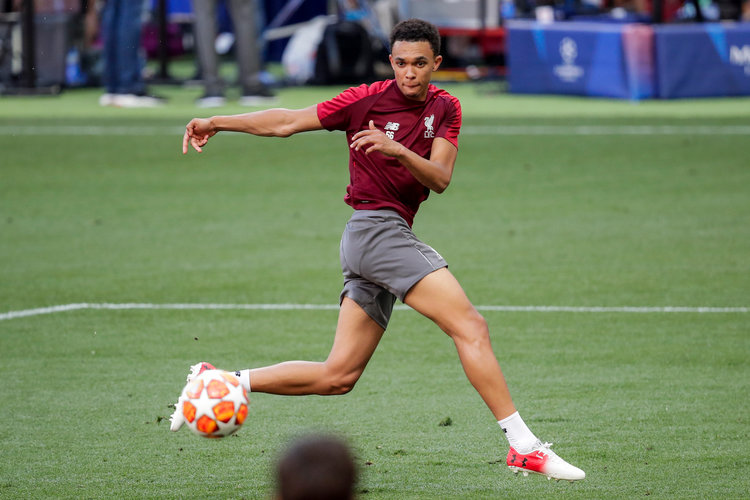 Kane’s inclusion means Tottenham will get runners in behind Liverpool’s defensive system, something “they’re very good at,” according to tactics expert Cox.

“Even if Kane’s fit, I don’t think he’s going to be up to sprinting behind Liverpool’s defense to much, so I’d be looking at Heung-min Son and Delle Alli as players who can exploit Liverpool’s high defensive line.”

Cox added that this could reap benefits because Liverpool has a full back who, for all his praises, does have one glaring weakness.

Or here if you’re in a different region:

But Alexander-Arnold’s attacking prowess has, at times, come at the expense of defense and Tottenham’s big-game player Son has the ability to expose this.

“As much as Alexander-Arnold been good going forward this campaign, he has switched off defensively against Barcelona in that second leg, Barça got in a few times past him,” Cox said. “I think it’ll be Son up against him — and he’s the player to make some openings.”

Elsewhere, as great as van Dijk has been, for Cox, it is Tottenham who have “probably the best center back combination in the league” thanks to Jan Vertonghen and Toby Alderweireld.

But even they are not error-free. “The one thing I’d say, in the most recent meeting they let Roberto Firmino in for a header opener. The one area you don’t think Firmino will get the better of you is in the air, so that was something of a surprise.”

One player battle Murphy expects Liverpool to dominate, is Sadio Mane against Kieran Trippier. “Mane’s been sensational for Liverpool this season, he’s got that pace and he drifts. Sometimes he’s wide left, sometimes he’s in the middle. What does Trippier do? Does he stay with him, match him one-on-one, or does he get help and where does he get the help from.”

There are many tangibles in this all-English encounter.

But while Murphy expects Mane to make himself a hero for a triumphant Liverpool, neither Murphy or Cox would be surprised if Tottenham sprung one final surprise. A surprise that would arguably be the greatest this unpredictable tournament has produced all season.

PICTURED: Juventus flop Emre Can breaks young girl’s glasses with wayward shot in warm up for Sassuolo clash – The Sun