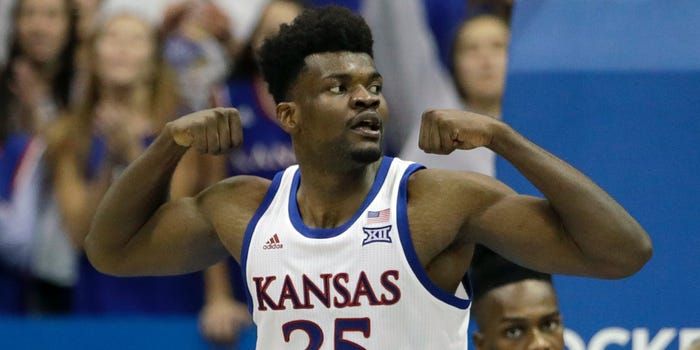 Utah Jazz rookie center Udoka Azubuike was not inspired to play basketball until he saw himself in some Michael Jordan highlights.

Azubuike, a 21-year-old from Kansas taken by the Jazz in the 2020 NBA draft on Wednesday, grew up in Nigeria playing soccer.

He told ESPN that basketball wasn't on his radar until he watched a VHS tape of Jordan highlights. That's when he decided to play basketball.

"I was 11 or 12 back then. My brother is the one that had the video tape. We didn't have, like, internet back then," Azubuike said.

"I just started having love for the game, just seeing Jordan and the air just fly [by]. In my mind, I'm like, 'That's pretty cool. I think I can do that.'"

Azubuike moved to the U.S. in 2013 at 13 years old after being discovered in the Basketball Without Borders program. According to Bleacher Report's Jason King, Azubuike had barely played basketball when in his first competitive game in high school, he matched up with Joel Embiid.

Azubuike caught the eyes of Kansas' Bill Self, and later decided to take Kansas' offer over North Carolina and Florida State because Embiid convinced him to go to Kansas.

As it turned out, Azubuike could immediately play. His stats grew with his role at Kansas. He set an NCAA record for field goal percentage, shooting 75% in his senior year while averaging 13.7 points per game.

And he can fly like Jordan. According to The Athletic's C.J. Moore, Azubuike got in the best shape of his life for his senior season at Kansas. At the draft combine, he registered a 37-inch standing vertical, the best number for a center in combine history.

Azabuike now enters a situation where he can immediately contribute as a backup to Rudy Gobert.