Opposition Leader Peter Dutton has indicated he may be open to supporting a referendum on a First Nations Voice to parliament, but he wants “the symbolic … to be accompanied by practical responses”. He wants a Voice to “reduce the incidence of child abuse within those communities” and to improve education, employment and “many other indicators”.

Dutton is correct to insist on practical impact: Indigenous recognition would be meaningless without it. Importantly, a practical focus will enable Dutton to find common ground with many Indigenous leaders, such as Noel Pearson and others, who have championed Indigenous responsibility in their affairs. 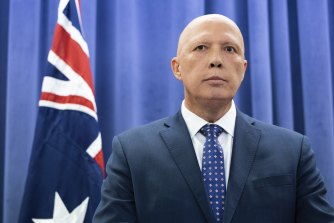 Peter Dutton, who has indicated support for a Voice that is practical, not merely symbolic.Credit:Alex Ellinghausen

Such leaders want practical action to close the gap, not empty symbolic gestures. The vast majority of Indigenous Australians agree. That is why they want a Voice, not a tokenistic preamble.

Five years ago, Indigenous peoples from all over Australia gathered to produce a consensus statement on how they wish to be constitutionally recognised. The Uluru Statement from the Heart acknowledged that Indigenous people “are the most incarcerated people on the planet”, their “children are aliened from their families at unprecedented rates” and their “youth languish in detention in obscene numbers”.

They proffered a practical solution – a constitutionally guaranteed First Nations Voice. While initially scuttled by misrepresentations of it amounting to a third chamber of the parliament, five years on, political support has been achieved. In 2018, a bipartisan joint select committee headed by Julian Leeser and Patrick Dodson acknowledged that a Voice is the only way forward in the Indigenous recognition debate.

Since then, a co-design process is now completed. It is encouraging that the Minister for Indigenous Australians Linda Burney has said she will build on the work of the former minister, Ken Wyatt, and pursue bipartisanship. Dutton’s comments give cause for further optimism.

Vote Compass data suggests 73 per cent of Australians agree, not only with the creation of a Voice, but that it should be guaranteed by constitutional change. There is clear appetite for a Voice referendum.

The Uluru Statement called for “the establishment of a First Nations Voice enshrined in the Constitution”. If the intention of a Voice is to genuinely back Indigenous people to tackle the real problems they face, then the constitutional enshrinement they call for, which is supported by broad public opinion, should be respected.

The practical necessity for a constitutionally guaranteed Voice could not be more apparent than right now. Take the problem of alcohol access in Indigenous communities. Alcohol has been restricted in the Northern Territory since the 2007 Howard government intervention. Under legislation set to expire on June 30, restrictions will be lifted.

Despite a coalition of community organisations calling for a moratorium on takeaway alcohol sales, the Northern Territory government amended the Liquor Act to allow alcohol sales in remote communities. North Australian Aboriginal Justice Agency CEO Priscilla Atkins said “the impact this will have on Territorians will be absolutely devastating. We already have so many problems related to alcohol. Our hospitals are full, our domestic violence rates are the highest in the nation and rising, and the justice system is clogging up.”

Atkins said the government’s option for individual communities to extend the alcohol ban for another two years simply cannot work as “most remote communities are unaware this is happening because there has been no consultation”.

Central Australian Aboriginal Congress CEO Donna Ah Chee called out “the NT and
Commonwealth governments [which] have failed to ensure Aboriginal people are properly
protected from the harm that we know alcohol causes”.

It may seem counterintuitive for many Australians, who recoil from government intrusion into
our lives, that some Indigenous communities up north might wish to remain dry under the law, but this demonstrates why a Voice is so critical.

The Dan Murphy’s saga in Darwin provides another salient example. The proposal for a new liquor store had previously been rejected by the Northern Territory’s Liquor Commission because of likely community harm. Causing anger among Indigenous health groups, the Labor government circumvented the commission’s decision by rushing through legislation that gave the final say to a bureaucrat, the director of Liquor Licensing, who did not have to consider community impact.

Legislative commitments to consultation are too easily overturned. The practical imperative for a constitutional requirement for Indigenous communities to be heard in decisions made about them is clear.

Governments, no matter how well-meaning, should not presume to know what is best for each of Australia’s many and distinct Indigenous nations unless they first hear their voices. That is what a constitutionally guaranteed First Nations Voice will ensure, simultaneously upholding the Constitution and respecting parliamentary supremacy, by leaving the detail for elected politicians to determine.

Dutton is right to insist that a First Nations constitutional Voice must deliver practical results.
That is what Indigenous people want. And that is what Australians want.

Karina Okotel is a former federal vice president of the Liberal Party.

Alison Roman chimes in on the Bon Appétit shakeup

Courtney Stodden credits Elliot Page after coming out as non-binary