White couple who adopted a black child hit back at critics who claim they won’t be able to take care of his hair, ‘raise a strong black man’ or teach him about police profiling

A white couple have hit back at online critics who slammed them for adopting a black child – claiming they won’t be able to raise a ‘strong black man’.

Steven, 35, and Ashley Evans, 29, from Cedar Rapids, Iowa, are documenting their journey on TikTok after adopting their 19-month-old son Abriel in 2019.

However the couple, have been subjected to cruel taunts from trolls who claim they shouldn’t have been allowed to adopt him and even record their own videos shaming the family.

Among the ‘attacks’ directed at them were claims they would not be able to do Abriel’s hair or take care of his skin – nor teach him about how police officers may ‘profile him’. 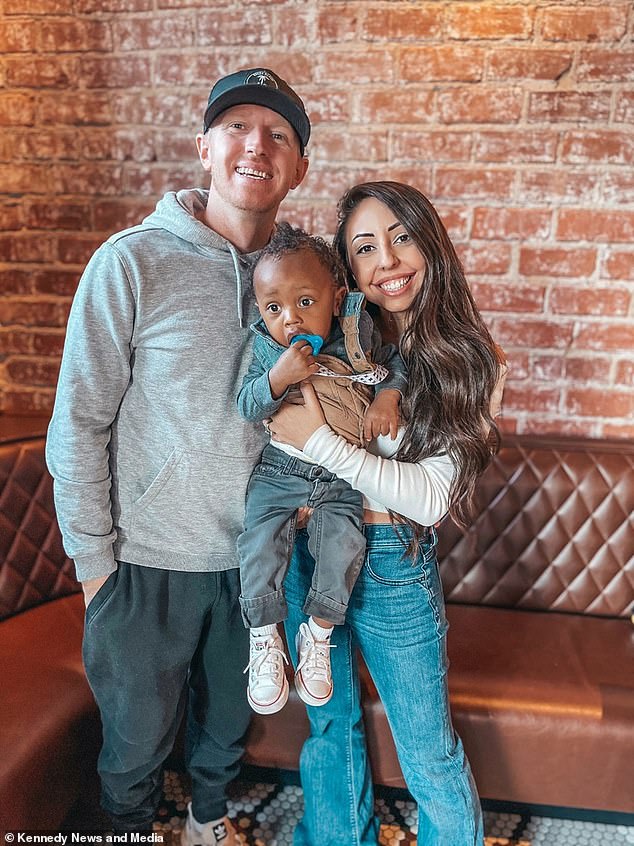 Steven, 35, and Ashley Evans, 29, from Cedar Rapids, Iowa, have hit back at online critics who slammed them for adopting their son Abriel – claiming they won’t be able to raise a ‘strong black man’

Real estate developer Steven fired back at the trolls with an emotional but positive video challenging his critics to adopt kids themselves if they were so concerned about children needing homes.

Steven said: ‘They were saying there were certain things that we wouldn’t be able to teach him because we’re white.

‘They said that because we never went through the experience of growing up as black in America.

‘Basically, we were being told that we wouldn’t be able to teach him how to respond if he found himself in a racial situation. 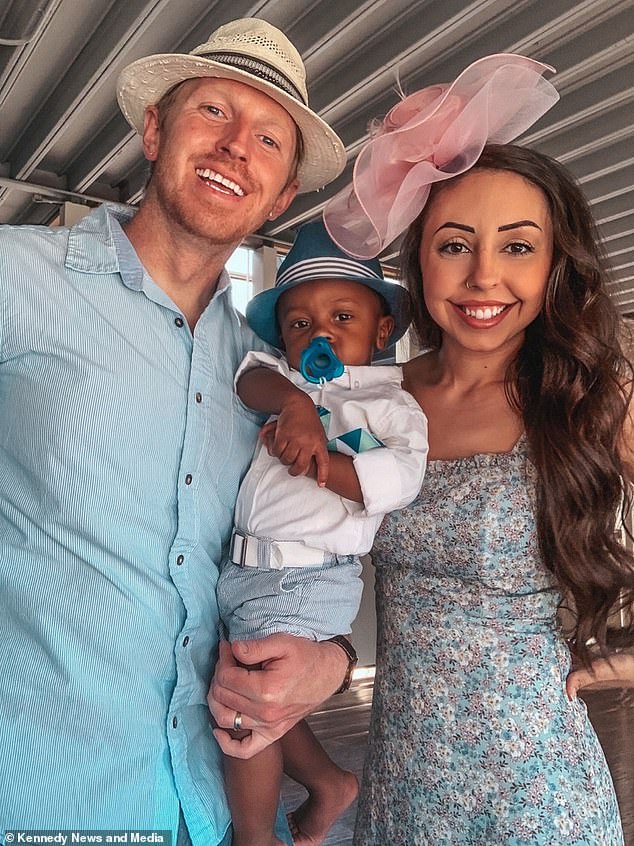 Steven, 35, and Ashley Evans, 29, decided to adopt rather than going through IVF after they discovered they both had fertility issues and couldn’t conceive naturally

‘These comments made me angry – oftentimes they would make videos in response to ours, where they’d say, “You will not be able to teach that kid how to grow up”.’

The new father added that some people even said they ‘felt bad’ for the baby, and that the family should never have been allowed to adopt him.

He said: ‘Adoption is hard enough, not to mention raising a child on top of that. We have those hurdles to overcome.

‘So, it’s hard to have people telling us we should have never adopted him.’

The couple adopted Abriel when he was born in November 2019 and have raised him since – with most people accepting them as a family.

But the couple have also experienced judgement and prejudices in real life too, leaving nurse Ashley surprised at the circumstances of these encounters.

Ashley said: ‘It’s funny – we live in Cedar Rapids, Iowa, which isn’t a particularly large city. But everyone is awesome. 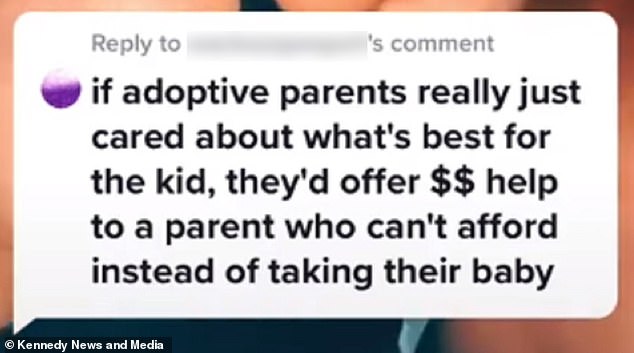 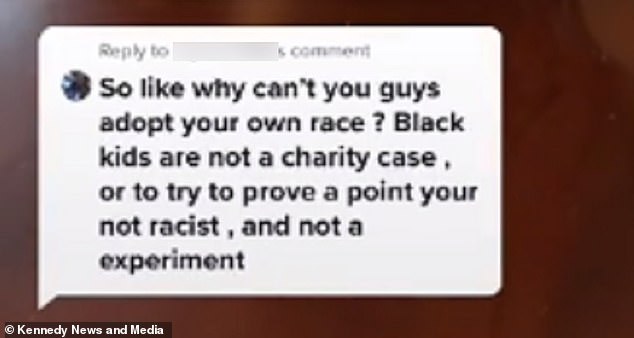 The couple, have been subjected to cruel taunts from trolls who claim they shouldn’t have been allowed to adopt him and even record their own videos shaming the family

‘Nobody stares so much, they just smile. They see us and Abe, and they see love.

‘But when we’re in big cities like Chicago, that’s where people stare at us. They will talk to each other right in front of you, never to our face.’

Ashley said: ‘We acknowledge he’s black and that there’s a difference between us, but it doesn’t mean we love him any less.

‘It’s really sad that people are trying to segregate children. We’re all fighting to be equal, and people are still striving for the opposite of that.’

Abriel was adopted by the couple after they found they were both infertile after years of trying to get pregnant. 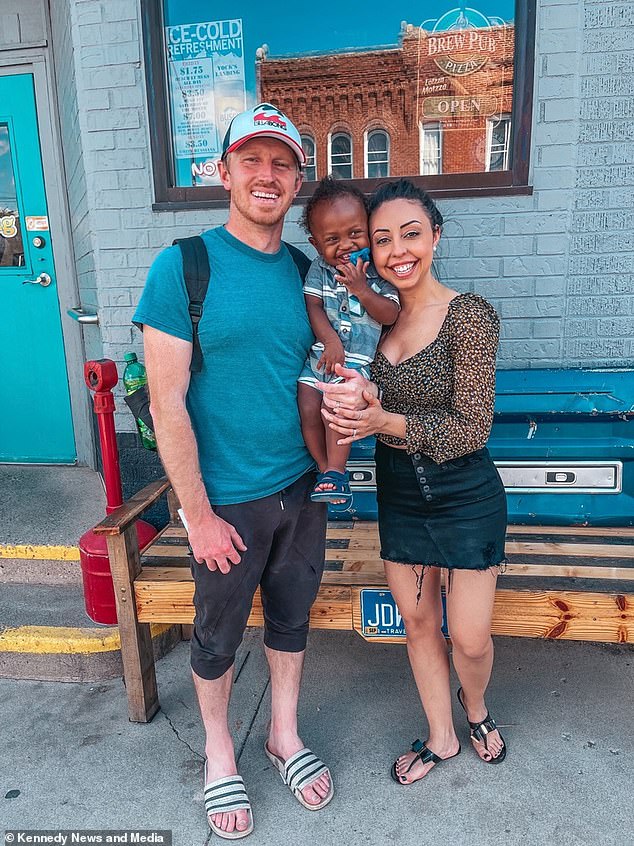 Steven said: ‘Instead of going through IVF, we thought we would adopt. Our plan had been to have four kids of our own and adopt one.

‘We’d been trying to get pregnant for a long time, and all our best friends were getting pregnant whilst we weren’t. Every single month when we found out we weren’t pregnant was a struggle.

‘So that’s when we decided to start the adoption process, and we got the best kid ever. He’s phenomenal.’

The couple’s adoption process was ‘quick’, they decided on adopting in April 2019 and Abe was born in November.

They explained that they are ‘really close’ with the birth family, and chose to do an open adoption because they felt it was important for Abe to grow up knowing them.

Ashley added: ‘When we met his mum, she was already in her second trimester. We were actually in the delivery room when he was born.

‘The message of our TikTok account is that no matter how family comes to you, whether it be through adoption or IVF, your family is beautiful. We’re all human and everyone needs love.’

Steven addressed the family’s critics in a TikTok video which has gained more than two million views.

In the video, Steven said: ‘Being a white father of our adopted black son, people often comment and tell us that we won’t be able to raise him to be a strong black man someday.

‘First off, if it bothers you that much, then you go adopt. Go adopt a child. Go change a child’s life. There’s so many kids of all ages and races who need adopting.

‘And if that’s something that you’re not willing or able to do, reach out to people like me and message us and show us love.

‘Say “hey, if you guys need anything ever, let us know, if you have any questions about anything whatsoever about raising a young black man, let us know. we’ll be there for you.”

‘It takes a village, guys. Reaching out to me and messaging me and letting me know you’re there for me will change his life a lot more than telling me I can’t do something.

‘Honestly, we’re trying our best. we’re giving him everything that we have. Being a father to him is seriously the best gift, the best thing that’s ever happened to me.’

The video received numerous supportive comments from all over the world.

One person commented: ‘Do you bro, forget them haters. You’ll do a hell of a job. Just raise him to be a good man and he’ll be amazing.’

Another wrote: ‘That baby is perfectly content in your arms; he feels the love! The gift of unconditional love is irreplaceable.’

While another added: ‘The color of your skin doesn’t matter, it’s the love for the child that matters.’

However some people who commented did not agree with Steven and doubled down on their criticism of the couple’s adoption choices.

One said: ‘But you deflected the question. How are you going to prepare him for adulthood as a black man?’

Another added: ‘If adoptive parents really just cared about what’s best for the kid, they’d offer $ help to a parent who can’t afford instead of taking their baby.’

A third went a step further and said: ‘So like why can’t you guys adopt your own race? Black kids are not a charity case, or to try to prove you’re not racist, and not an experiment.’

When Will Khloe Kardashian Start Dating Again? Her Plans After The Tristan Drama Make Sense