Jim Hanson, who served in the U.S. Army Special Forces, shares his thoughts on how U.S. military leaders have reacted to nationwide protests.

WASHINGTON - Protesters are expected to gather in Washington for a huge demonstration on Saturday, its police chief said, as U.S. street marches over the killing of a black man in custody enter a 12th day and authorities move to rein in policing tactics.

George Floyd, 46, died on May 25 in Minneapolis after a police officer pinned him to the ground with a knee to the neck for nearly nine minutes. The killing has sparked days of protests across the United States against racism and police brutality, and also demonstrations around the world.

Some activists on social media have called for a million people to attend a protest in the capital. 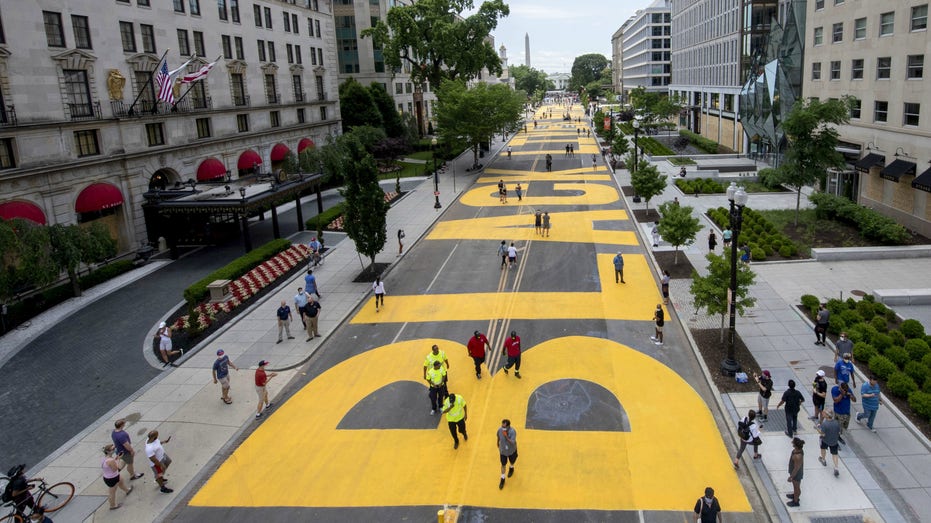 The Washington Monument and the White House are visible behind the words Black Lives Matter sign that has been painted on 16th Street by city workers and activists, Friday. (Khalid Naji-Allah/Executive Office of the Mayor via AP)

“We have a lot of public, open source information to suggest that the event on this upcoming Saturday may be one of the largest we’ve ever had in the city,” Washington, D.C., Police Chief Peter Newsham told local media, adding that much of the city center would be closed to traffic from early in the day.

Newsham did not give a crowd estimate. Local media has predicted tens of thousands of attendees.

North Carolina Governor Roy Cooper has ordered that all flags at state facilities be lowered to half-staff from sunrise to sunset on Saturday in honor of Floyd, who was originally from the state’s Fayetteville city. A televised memorial service will also be held in the city. 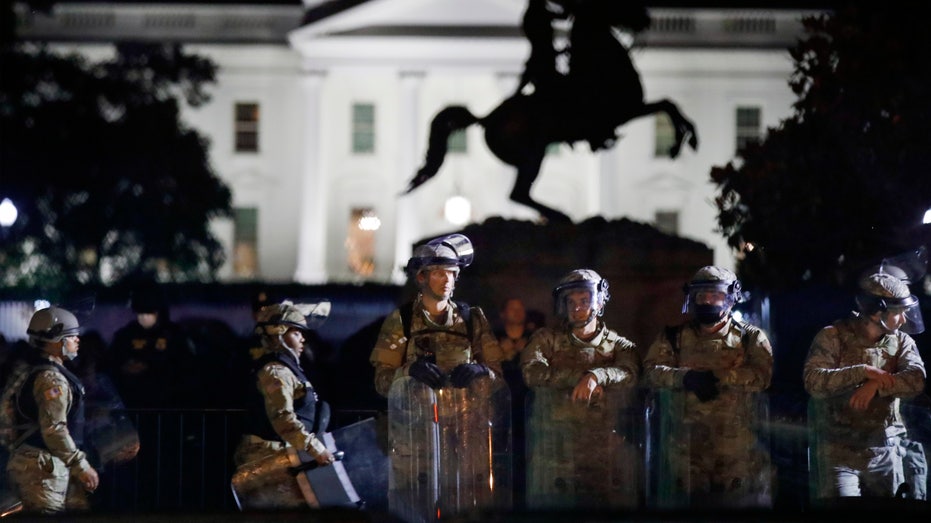 A line of DC National Guard members stand in Lafayette Park as demonstrators gather to protest the death of George Floyd, Tuesday, near the White House in Washington. (AP Photo/Alex Brandon)

On Friday, marches and gatherings took place in Atlanta, Los Angeles, Minneapolis, Miami, New York and Denver, among other places, while protesters massed again, in the rain, in front of the White House. The night-time protests were largely peaceful but tension remains high even as authorities in several places take steps to reform police procedures.

A federal judge in Denver ordered city police to stop using tear gas, plastic bullets and other “less-than-lethal” devices such as flash grenades, with his ruling citing examples of protesters and journalists being injured by police.

“These are peaceful demonstrators, journalists, and medics who have been targeted with extreme tactics meant to suppress riots, not to suppress demonstrations,” U.S. District Judge R. Brooke Jackson wrote in the ruling.

In Minneapolis, Democratic city leaders voted to end the use of knee restraints and choke-holds, where pressure is applied to the neck, while California Governor Gavin Newsom said he would end state police training of carotid restraints similar to the technique used on Floyd. 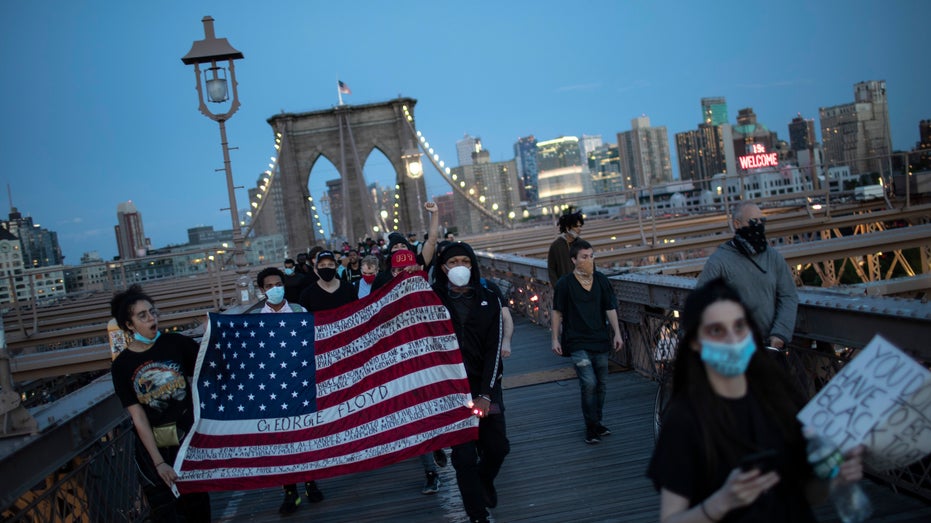 Protesters march across the Brooklyn Bridge as part of a solidarity rally calling for justice over the death of George Floyd, Monday in New York. (AP Photo/Wong Maye-E)

Protesters around the world are also expected to take to the streets again on Saturday, a day after many marched in a wave of outrage at the death of Floyd and racism against minorities in their own nations.

NFL: WE WERE WRONG

Black Lives Matter activists have called for cities to defund police departments. Los Angeles Mayor Eric Garcetti, a Democrat who in April proposed increasing law enforcement funding, this week reversed course and said he would seek some $150 million in cuts to the Los Angeles Police Department.

In another sign of how attitudes have changed, National Football League (NFL) Commissioner Roger Goodell said the league had made mistakes in not listening to players, in a video denouncing racism in the United States.

The NFL has been locked in a debate with players over kneeling protests during the playing of the national anthem. 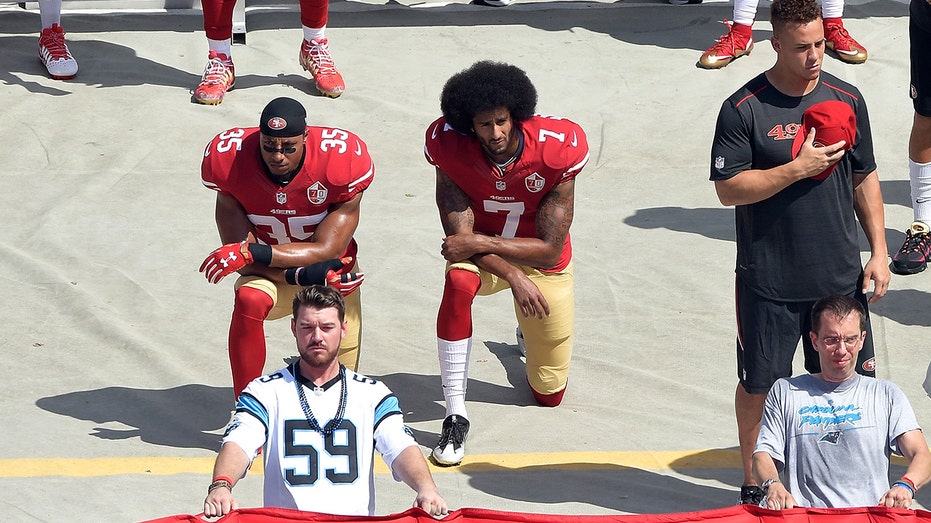 Colin Kaepernick and Eric Reid of the San Francisco 49ers kneel during the national anthem before their game against the Carolina Panthers on September 18, 2016 in Charlotte, North Carolina. (Photo by Grant Halverson/Getty Images)

Two police officers in Buffalo, New York, were suspended without pay on Thursday and placed under investigation after a video showed them shoving a 75-year-old man to the ground.

But the decision was met with pushback from the officers’ colleagues, with all 57 members of the police tactical unit quitting in protest at their treatment.

The demonstrations have erupted as the public and businesses struggle to recover from sweeping lockdowns imposed to stop the spread of the novel coronavirus. Disease experts have said the protests could spark new outbreaks.

Washington Mayor Muriel Bowser, who has sparred with U.S. President Donald Trump over his sometimes heavy-handed response to the rallies and marches in the nation’s capital, had the slogan “Black Lives Matter” painted in massive yellow letters on a street leading to the White House.

After nightfall, Bowser had light projections spelling out the words beamed onto nearby buildings, which she said on Twitter was a “night light” aimed at Trump.