Dozens of eminent Australians, including two former Australian War Memorial directors, have written to the Prime Minister warning him a proposed $498 million redevelopment will damage the site's value.

The plan, currently under review by the federal government but supported by both major parties, would demolish the Anzac Hall, add galleries for modern exhibits and expand the exhibition space by 80 per cent and add an underground car park and entrance. 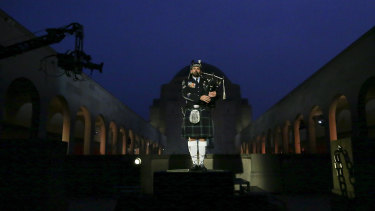 The redevelopment of the Australian War Memorial has been criticised by two former directors.Credit:Alex Ellinghausen

The letter, sent by a group calling themselves the Heritage Guardians, was signed by former War Memorial directors Steve Gower and Brendon Kelson, former federal MP and former chairwoman of the Australian Heritage Council Carmen Lawrence, as well as historians professors Frank Bongiorno and Mark McKenna.

Plans for the redevelopment was spearheaded by former director of the memorial Brendan Nelson, who stepped down late last year. His successor, Matt Anderson, will appear before Senate estimates on Monday night.

The redevelopment has also been criticised by the Australian Heritage Council.

"Physical expansion to support the display of large objects such as submarines and aircraft is not a sustainable intent over the long term and, in the current circumstances, cannot be achieved without significantly impacting listed heritage values," said Heritage Council chairman and former Liberal minister David Kemp.

"Regrettably the council cannot support the conclusion that the proposed redevelopment will not have a serious impact on the listed heritage values of the site."

The Heritage Guardians letter highlighted several key concerns with the redevelopment including that the building would "be swamped by a huge glazed addition that will also be visible down Anzac Parade", and overall increase in buildings would lead to a "hardening of what is currently a respectful balance of built and landscape elements".