Vigil star Martin Compston has told how his late grandfather served at sea in real life – in the Second World War.

The Scottish actor, 37, who gained fame in BBC hit Line Of Duty, posted a photo online as his Vigil character chief petty officer Craig Burke alongside a snap of his grandfather, who was in the merchant navy.

Writing on Instagram, Compston said: ‘On the left [referring to himself] we have a guy worried he looks daft in this hat and might take a slagging off his mates, on the right a guy who doesn’t look bothered at all he’s in the midst of a World War. 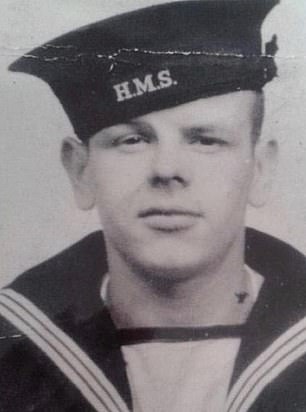 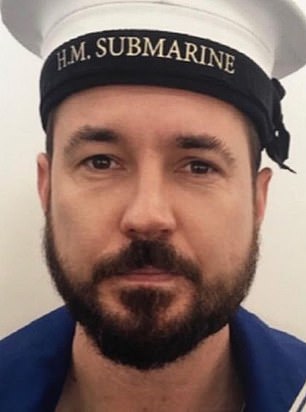 Family ties: Scottish actor Martin Compston, 37, who gained fame in BBC hit Line Of Duty, posted a photo online as his Vigil character chief petty officer Craig Burke (right) alongside a snap of his grandfather, who was in the merchant navy (left).

‘Can surprise you what hits you on a job but doing this standard prop picture for VIGIL got me misty eyed wondering what my Granda must’ve been thinking when he got that portrait done.

‘He’s sadly no longer with us and never got the opportunity to ask him but gave me a feeling of immense pride in him. #weehorsey.’

The post was met with support by friends, family and followers, with some saying they remember his grandfather from their own childhoods.

Vigil, which premiered last night, is a murder mystery set on board a nuclear submarine. 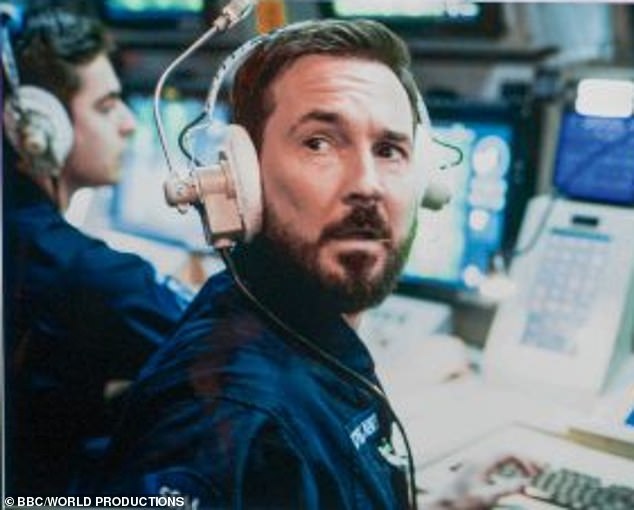 Burke dies after raising concerns over the commanders’ decision not to help a fishing trawler that finds itself in difficulty, potentially after coming into contact with an enemy submarine

Chief petty officer Burke (Compston) dies in the first 10 minutes after raising concerns over the commanders’ decision not to help a fishing trawler that finds itself in difficulty, potentially after coming into contact with an enemy submarine.

Detective Chief Superintendent Amy Silva (Suranne Jones) is brought on board to investigate Burke’s death. It has been made to look like a drug overdose but she suspects something more sinister at play.

Meanwhile on land her ex-partner Kirsten Longacre (Rose Leslie), discovers that Burke was having an affair with a CND activist, Jade (Lauren Lyle).

Jade has found out that Burke is dead, and that a sub sank the trawler. ‘Everyone knows it’s a cover-up. This is the Navy, this is what they do,’ she declares.

Exactly what they are covering up or why they are doing it remains to be seen.

The show has been met with some criticism from TV critics but has been well reviewed by fans.

Suranne Jones’s submarine drama Vigil is all adrift… but it still reels you in: CHRISTOPHER STEVENS dives into the naval whodunnit

Where do you keep a dead body on a nuclear submarine? It’s a dilemma, and one that has never occurred before to the flustered Captain Newsome on Vigil (BBC1).

HMS Vigil is the ultimate weapon of war, designed to stay at sea for years on end, even in the event of a world-ending holocaust.

You’d think the naval boffins would remember to include cold storage.

But when stroppy sailor Craig Burke (Martin Compston) is found dead from an apparent heroin overdose in his bunk, the skipper (Paterson Joseph) isn’t sure where to put him. 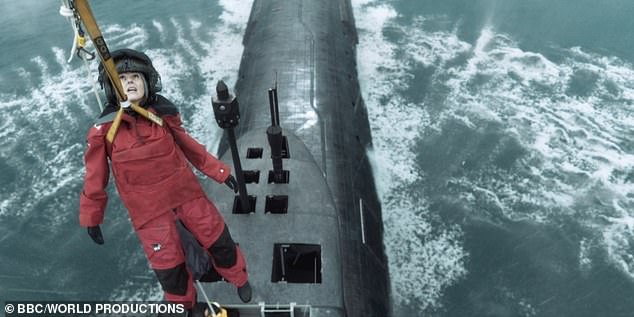 There’s a freezer in the galley, but it’s full of food. Anyway, the sub’s head chef is in tears over Burke’s demise. Perhaps she’s worried her cooking is to blame.

In the end, Newsome opts to park his crewman in an empty torpedo tube. It’s cold, it’s sealed, it’s ideal. The only puzzle is why, when the captain is later trying to cover up the death, he doesn’t just press the ‘fire’ button and jettison the body. Torpedoes away!

It’s all completely crackers, and that’s before Glasgow detective DCI Amy Silva (Suranne Jones) is winched down from a helicopter to board the sub at sea.

Silva is an intriguing and complex character – claustrophobic, terrified of water, a depressive who usually copes by going for long runs, she is a terrible candidate for an investigation in a tin can half a mile below the waves.

She has been despatched because apparently this is standard Royal Navy procedure when someone expires on a patrolling nuclear sub – you stick the corpse in a missile launcher and summon a copper from dry land. From the start, Vigil expected us to suspend our disbelief from about the height of a Sea King rescue copter.

The six-part serial, which continues tonight, opened aboard a trawler in the Irish Sea, where the crew were casting their net after spotting a couple of encouraging blips on the underwater radar. 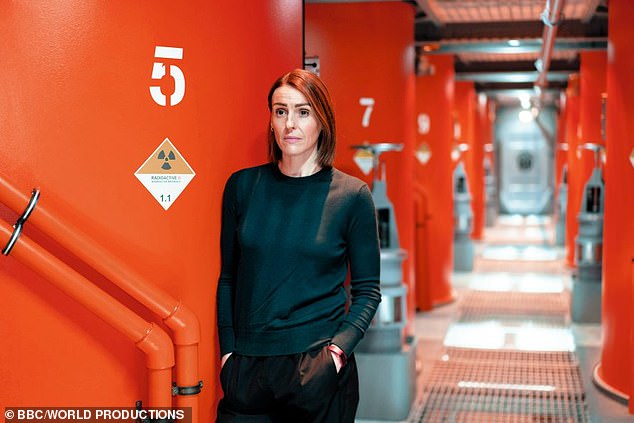 Christopher Stevens: Silva (played by Suranne Jones, pictured) is an intriguing and complex character – claustrophobic, terrified of water, a depressive who usually copes by going for long runs, she is a terrible candidate for an investigation in a tin can half a mile below the waves

‘Nice little shoal under us,’ chuckled the chief trawlerman. His monitor must have been playing up, because those shadows on the screen were submarines – Vigil and the enemy boat stalking it.

One snagged the nets and dragged the trawler down. Everyone involved with the scene did their best – the actors leaned sideways and yelled, while stage hands sloshed buckets of water at them. It still looked like an am-dram production of Moby-Dick.

On board Vigil, radar operator Burke was the only sailor to spot the sinking trawler. He sounded the alarm, and the captain dismissed it, telling him to ignore what he’d seen.

Instead of obeying orders, Burke staged a one-man mutiny. A senior officer put an arm round his shoulders and led him away for a lie-down.

There’s no brig or cat-o’-nine-tails in the modern British Navy for crew who yell at their commanding officer… just a friendly admonition and a chance to put your feet up.

At this point, only five minutes into the drama, viewers were faced with their own dilemma: switch over and watch Brenda Blethyn in Vera, or suspend their dwindling disbelief from an ever greater altitude.

This wasn’t a question of minor details being wrong. Absolutely everything about Vigil rings false.

The whole crew is an argumentative bunch, ill-disciplined and arrogant. Newsome’s second-in-command (Adam James) can’t open his mouth without sneering.

The bridge below deck is more like the Starship Enterprise than the command room of a submarine. The corridors are wide enough to walk three abreast and, instead of sharing bunks by rota, every crewman has a personal berth with family photos on the wall.

The Coxswain, Elliot Glover (played by Endeavour’s Shaun Evans), takes DCI Silva to Missile Deck Three – where, he explains, off-duty personnel like to ‘hang around’.

Well, there’s no recreation room aboard this boat, so where else are they going to mooch and gossip, except in the atomic arsenal?

Meanwhile, back on land, Silva’s sidekick, Kirsten Longacre (who is also her ex-lover, played by Rose Leslie), discovers that Burke was having an affair with a CND activist, Jade (Lauren Lyle).

Jade’s hobby is lying down on roads outside nuclear bases and pretending to be dead. She also has access to all the Navy’s secrets.

She’s found out that Burke is dead, and that a sub sank the trawler. ‘Everyone knows it’s a cover-up. This is the Navy, this is what they do,’ she declares.

For all this, Vigil is not unwatchable. Ignore the fact that it’s written with no accurate knowledge whatever of life on a nuclear sub, and that the anti-military bias is blatant. Despite that, there’s a lively murder mystery here.

Above all, there is a first-rate cast. With these actors, headed by Jones as a sleuth who is one panic attack away from crash-diving, any drama is well worth watching… even one as far adrift from reality as this.

Who is Jessica Plummer dating? Inside I’m A Celeb star and mum of one’s love life