Since it was first established in 1921, the Archibald Prize has drawn plenty of headlines with its controversies, occasional legal stoushes, and personal triumphs.

So it’s perhaps fitting that Sydney mixed media artist James Powditch has pinched the news headlines to create his latest entry for the prestigious portrait prize on its 100th birthday. 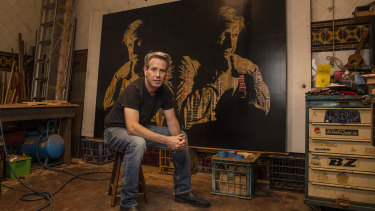 After painting Labor leader Anthony Albanese in 2020, Powditch has lionised another of his lifelong heroes, veteran ABC journalist Kerry O’Brien.

The six-time Walkley Award-winning O’Brien is painted twice in black silhouette to show the fine line the journalist walks between his public and private persona, and a man looking back over a long career and forward to life post-journalism. 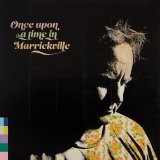 “As any human being, you have your very strong personal views, in his case his sense of social justice,” Powditch says. “That’s where the idea of the dual portrait came from. Two sides of the same coin.”

Powditch is a six-time Archibald finalist himself, having entered the prestigious portrait prize every year since 2005, except in 2017 when he took a rare year off.

The Albanese portrait, Once Upon a Time in Marrickville, was hung last year giving him the impetus to enter again.

But he needs no encouragement – the open competition, with its capacity to generate cyclonic national attention, is a bit of an obsession.

“There is no doubt I put too much emphasis on the Archibald,” Powditch says. “It becomes all-consuming. My partner hates it. She’s like, ‘Oh, it’s Archibald time again, it will be nothing but Kerry O’Brien’. ‘Kerry said this, and Kerry said that’, or whoever I’m doing at the time. I’ve a show coming up in August with Nanda\Hobbs and I haven’t really exhibited much in 10 years – I think the Archibald has been a place to be visible.

“I don’t know how many other people find it obsessive, but I love getting into people’s heads. There is a fascination having seen someone all my life, who has influenced me hugely, to then have a relationship with them to get an inside story or track into what drives them.”

Over last 100 years, the prize has featured prominent and emerging artists in Australia and New Zealand, and celebrated figures from all walks of life, from famous faces to local heroes, capturing the changing face of Australia, says Art Gallery of NSW director Michael Brand.

Last year Vincent Namatjira became the first Indigenous artist to win the prize, and in a year of Black Lives Matter protests and the spotlight on gendered violence, Powditch expects the Archibald to reflect the spirit of those national conversations.

Alongside this year’s finalists, the gallery will stage Archie 100, featuring a selection of portraits drawn from more than 6000 included in the Archibald Prize since it was established.

The O’Brien portrait began with Powditch’s tentative approach to the journalist through his stepmother and father, artist Peter Powditch, who’d often shared a beer with O’Brien and Mungo MacCallum in their local Bangalow pub.

“From my stepmother’s perspective, she wanted me to get across his warmth and generosity of spirit and his curiosity,” Powditch says. “I was fascinated by his take on politics.”

O’Brien has been painted twice before for the Archibald, his portrait hung just the once in 2000. “I’m inclined to be cautious about these things,” O’Brien says. “People in the public eye attract all sorts of propositions, some interesting and others dangerous. It’s not something you want to do often, put it that way, but James was connected to Peter and Peter has been a friend of mine since I moved to Byron 11 years ago. I knew enough of James’ work to be impressed by it.”

O’Brien admires the way Powditch’s portrait draws the viewer in with its clever use of headlines significant to his journalistic career.

“The thing that interests me about a portrait is to see how far it takes you beyond what you know of a person,” O’Brien says, “and how an artist might cut through the superficial … and reveal something of them that is not obvious.”

The One With the Birds: Watch Aquarium Penguins Waddle Around a Replica of the Friends Set