The Trump administration announced Thursday that it is removing the gray wolf — a species that once faced near-extinction in the United States due to trapping, trophy hunting and habitat destruction — from the list of animals protected by the Endangered Species Act. Conservationists and scientists have slammed the move as premature, and said it could potentially jeopardize the recovery of the species.

Gray wolves have been protected by federal law for more than 45 years under the Endangered Species Act of 1973. U.S. Interior Secretary David Bernhardt announced the decision to remove those protections on Thursday, claiming that the species has had a “successful recovery” based on scientific and commercial data.

The U.S. Fish and Wildlife Service said it will continue to monitor the species for five years, but state and tribal wildlife management agencies will now be responsible for managing and protecting gray wolves across the country.

“Today’s action reflects the Trump Administration’s continued commitment to species conservation based on the parameters of the law and the best scientific and commercial data available,” Bernhardt said in a press release. “After more than 45 years as a listed species, the gray wolf has exceeded all conservation goals for recovery. Today’s announcement simply reflects the determination that this species is neither a threatened nor endangered species based on the specific factors Congress has laid out in the law.”

The Mexican wolf is the only exception to the change.

According to the department, gray wolves in the U.S. now exceed 6,000 in the lower 48 states. U.S. Fish and Wildlife Service Director Aurelia Skipwith called the new ruling “a win for the gray wolf and for the American people.” 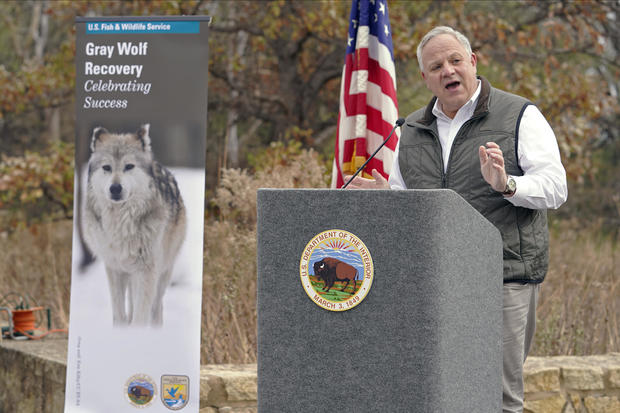 The Trump administration has been working for years to return the management of wild animals and protected wilderness back to state officials — despite numerous lawsuits and setbacks in federal court. Some lawmakers have also been working to weaken the Endangered Species Act, which protects animals at risk of extinction.

During Donald Trump’s presidency, 14 species have been removed from the act’s List of Endangered and Threatened Wildlife, and seven have been downlisted from endangered to threatened. While the administration boasts these numbers as a sign of conservation progress, activists say many species have been prematurely removed when they are still at risk. That includes wolves, which currently only occupy a small fraction of their former habitat.

“Again and again, the courts have rejected premature removal of wolf protection,” said Collette Adkins, carnivore conservation director at the Center for Biological Diversity, which plans to file a lawsuit to challenge the latest ruling. “But instead of pursuing further wolf recovery, the Fish and Wildlife Service has just adopted the broadest, most destructive delisting rule yet.”

The Defenders of Wildlife also said it plans to sue over the decision, which it called “premature and reckless.” Activists say the species is still “functionally extinct” and said the move defies “science and common sense.”

Peer-reviewed commissions by the Fish and Wildlife Service in 2019 found the proposal to delist gray wolves contained “substantial errors” and misrepresented the species’ progress. Reviewers criticized the proposal, with several strongly opposing it.

There has been widespread public support for wolf recovery. In 2019, the Service received a record-breaking 1.8 million digital comments from Americans opposing the removal of wolves from federal protections. Additionally, at least 86 members of Congress in both the House and Senate, 100 scientists, 230 businesses, and 367 veterinary professionals have publicly opposed the decision.

“Today the U.S. Fish and Wildlife Service is sentencing thousands of wolves to death. Putting these majestic animals in the crosshairs of trophy hunters who will kill them simply for bragging rights is irresponsible and goes against the values of most Americans,” Kitty Block, president and CEO of the Humane Society of the United States, said in a statement. “Wolves are not only a cherished part of our natural heritage they are vital to ensuring that our ecosystems are healthy and biologically diverse. We will fight this latest attack with everything we have.”

“We should be putting much more effort into coexistence with wolves, working to ensure that populations in the lower 48 are thriving and are able to play out their ecological role balancing our natural systems, instead of stripping critical protections still needed for their full recovery,” said Bonnie Rice, Sierra Club senior campaign representative.

“The science is clear that to protect our communities and prevent future pandemics, we need to be doing more to protect nature and wildlife, not less.”