The New Jersey mother, who has been charged with murder, had zip-tied herself to the steering wheel.

A New Jersey mother has been charged with murdering her two children after all three were found bound inside her car.

Yuhwei Chou, 36, is accused of smothering 7-year-old Samantha Ross and 11-month-old Paul Ross after duct taping their faces, before tying herself up.

The bizarre scene was stumbled upon on shortly after 7:30 AM Tuesday morning by a tow truck driver, who was driving along Mountain View Road in Hillsborough when he spotted the gray Toyota Corolla in a ditch.

Texas Mom Was Murdered by Stalker Who Claimed He'd Paid Her Thousands at Strip Club: Police

He stopped and ran over to help her, and realized she was zip-tied to the steering wheel. He then spotted the children, bound and restrained in their car seats in the back of the vehicle, showing no sign of life.

“He was shook up,” his father Robert Long (pictured, inset) told CBS2. “He said he found a lady in the ditch and said he asked her if she was all right and she said ‘no,’ I think. And then he seen the babies and then he called the cops right away.”

According to a probable cause affidavit obtained by MyCentralJersey.com, Chou admitted killing her children before tying herself up.

She told officers that after driving to a Wawa market for lunch, she then drove to a True Value hardware store where she bought duct tape and zip ties, the affidavit says.

She then drove to a sports facility on Mountainview Road where she pulled over and began to put duct tape over her daughter’s face, but drove off after getting “spooked” by a bystander in the park.

Further along the road she said she pulled in to a dirt driveway of a hunting area, where she climbed into the back seat and zip-tied her daughter’s hands and duct taped her face, before doing the same to her infant son, the affidavit claims.

Chou then told officers she used her hands to suffocate both children until they were dead.

“Chou stated that she has been planning the two murders for approximately one week,” the affidavit states.

According to investigators, she voluntarily gave her confession after being informed of her Miranda rights warning against self-incrimination.

Long’s son told another witness who had arrived on the scene to call 911; officers said that when they arrived, Chou told them she had zip-tied herself to the steering wheel.

Chou was arrested and taken for a medical evaluation. She has been charged with two counts of murder.

No motive for the killings has yet been revealed.

Speaking to CBS2, one of Chou’s neighbors, Helen Wang, was inconsolable.

She said had she known anything was wrong, she would have stepped in to help.

Another neighbor, Austen Wang-Bailey said he “never saw any sign of her being a bad mom.”

“Over the years, I had seen some, like, police cars would come occasionally,” he added. “We never knew what any of that was about.” 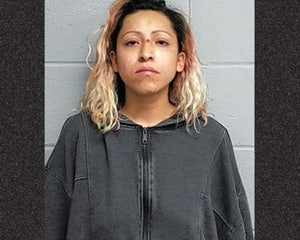 Woman Shoots Roommate Dead For Refusing to Kiss Her in Front of His Girlfriend: Police

Prince Harry Wore an "I Am Daddy" Jacket and We're Screaming

Kaitlyn Bristowe Met The Kardashians & Was "Mortified" At Her Own Reaction