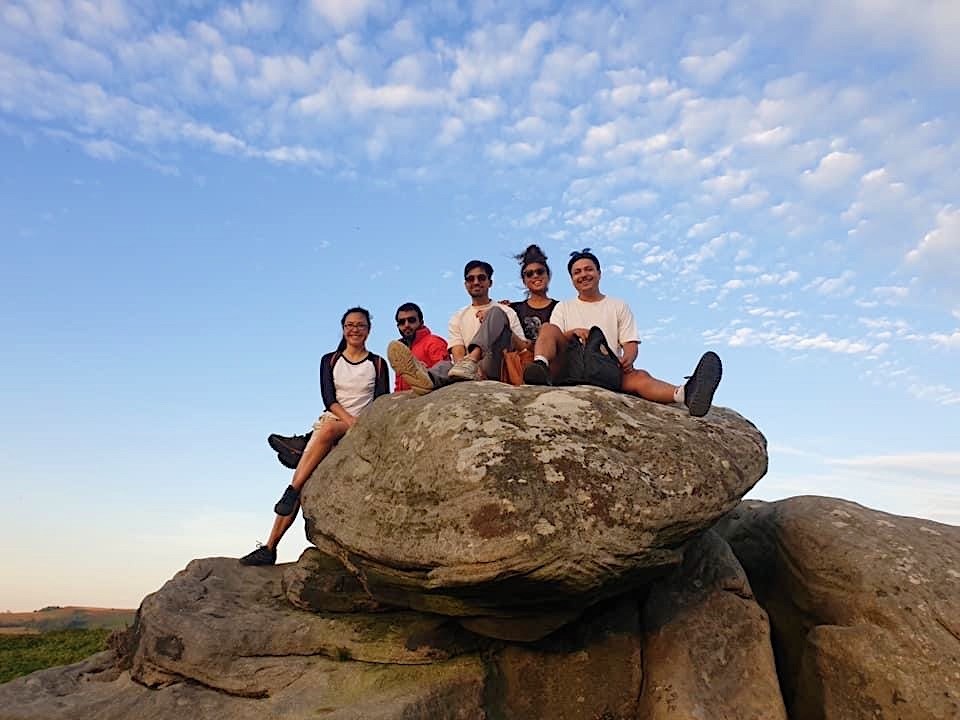 We have never leant on nature more than in the past eighteen months.

Those daily walks, glimpses of freedom we were permitted in the early days of the pandemic, became a lifeline for so many of us; myself included.

Every morning I would set off on a walk from my house just outside Sheffield city centre, meander up the eerily empty roads, head through Endcliffe Park, and within 20 minutes find myself in the Peak District.

This was the reason I moved to Sheffield four years ago, and I have never been more grateful.

Those of us who live in Sheffield and its surrounding areas are lucky. We have the Peak District on our doorstep and as a result, 61% of the city is green space. There’s no reason why we shouldn’t be accessing the natural wonders it offers, right? Wrong.

‘There are a lot of segments of society that are underrepresented in the UK outdoors,’ says Soraya Abdel-Hadi, founder of outdoor diversity community All The Elements.

‘It’s quite common for barriers to be shared across diversity areas. These can include a lack of outdoor experience, lack of access to appropriate outdoor gear (think financial, but also adaptive kit or correctly fitting kit), lack of transport, lack of appropriate facilities or support, or feeling unwelcome or unsafe.’

For people of colour, the myriad of barriers we face when accessing nature – and its widely documented mental health benefits – are all underpinned by racism.

In natural spaces, people of colour experience overt rural racism and microaggressions, the fear of being othered, and often feel the need to code-switch to ensure that their behaviour is palatable to a white-dominated, middle class landscape.

Then there are the financial barriers – such as the cost of walking boots or bus fare (19.2% of Sheffield’s population are ethnic minorities, yet 38% live in areas recognised as being in the 10% of the most deprived areas of the country). They then also have to contend with a lack of confidence and outdoor skills. All of these factors together mean accessing nature is far from a simple process.

While no local research for the Peak District currently exists – a 2017 study by Natural England found that nationally, just 26.2% of Black people spent time in the countryside, compared with 44.2% of white people. A separate report from 2019 found that only 1% of visitors to UK national parks come from ethnic minority backgrounds.

The 2021 Access to Nature report from the countryside charity CPRE concluded that inequalities in access to the countryside are connected to income, age and
disability but are ‘particularly severe’ when it comes to race.

‘Children from Black, Asian and minority ethnic backgrounds are half as likely to visit the countryside than white children,’ reads the report.

This is why I created Peaks of Colour, a Peak District-based walking club by and for people of colour only. Offering a sense of community and solidarity, we’re a safe place for people of colour, from Sheffield and beyond, to meet new people, explore new territories and feel like we belong.

We’re certainly not the first of its kind, with the likes of Black Girls Hike (BGH), Muslim Hikers and Steppers also taking up space in the outdoors across the country in recognition of the racism that pervades the land.

Rhiane Fatinikun, founder of Black Girls Hike says: ‘Since creating BGH it has become apparent that the outdoors has the same problems as all sectors, and the UK as a whole – racism that’s just so ingrained.

‘I was recently on a course and the instructor struggled to hide his prejudices, that’s also really common when dealing with other outdoor organisations. We’ve had people with huge platforms telling us to hang ourselves, and posts by brands that support us get trolled by people I know work in the industry.’

These are not isolated instances of abuse. Even in the few months since Peaks of Colour launched in July, we have had similar experiences.

After trying to promote the group on Peak District-related Facebook groups, we were subjected to a bombardment of racial abuse on these white-dominated platforms. Only one of these groups had admin members trained and equipped to deal with such abuse, and many group admins supported the views of those being abusive, or at least their ‘right to free speech’.

These groups are full of people we are likely to meet in the Peaks, and the irony is, their objections and disgust at our existence have only proved the need for safe spaces.

‘There’s a perception that safe spaces are built because groups don’t want to integrate,’ Soraya tells us. ‘In my experience this is not at all true.

‘We all wish that we didn’t need them, but while underrepresented groups do not feel supported or recognised in the outdoors, they are necessary.

Soraya adds that there is something ‘incredibly powerful’ about being in a group that understands and accepts you.

‘You can let your guard down, share experiences and receive the targeted support that you might need,’ she says. ‘You don’t need to worry about whether you’ll be welcome, because you explicitly are. It’s very difficult to explain the dynamic of a safe space to someone who has always fit within the mainstream outdoor narrative’ or who has grown up experiencing the outdoors as an everyday part of life.’

These are the sentiments expressed by Peaks of Colour group members like Bradley who says being outside does wonders for his mental health, ‘but being brown, I don’t always feel safe and confident going alone.’

‘There is safety in numbers but there is also the safety of being around people who just, get it, being able to talk freely without having to defend your experience or explain racism,’ Bradley adds.

‘The Peak District is predominantly a white space – you go into a pub or a café and you’re the only brown person there, and all eyes are on you. I get a sense of belonging being in this group that I didn’t get before.

‘The Peak District has always felt like home, but now I have a family with Peaks of Colour.’

Simply diversifying these spaces with an ‘add brown people and stir’ approach that isn’t deeply anti-racist, is always going to be ineffective.

On her own experience of facilitating BGH, Rhiane reflects: ‘It’s weird because I’ve created this safe space, but it hasn’t been a safe space for me for ages. Through our partnership work, I have to sit in spaces with white people who are racist, who think they’re being allies but are performative. It’s a lot.’

So, what is the solution? And what does the future of an inclusive outdoors actually look like?

Rhiane suggests that understanding this has a lot to do with language that is ‘really disempowering.’

‘Instead of using “diversifying” we should be saying “reclaiming”,’ she suggests. ‘We shouldn’t be fighting for a space at white tables, for crumbs and tokenistic gestures, we need to be making our own tables instead.’

That is exactly what Peaks of Colour hopes to do; reclaim the land, take up space and create a home for our members, our new family.

Sophie Countess of Wessex and Prince Edward: How their wedding broke royal tradition