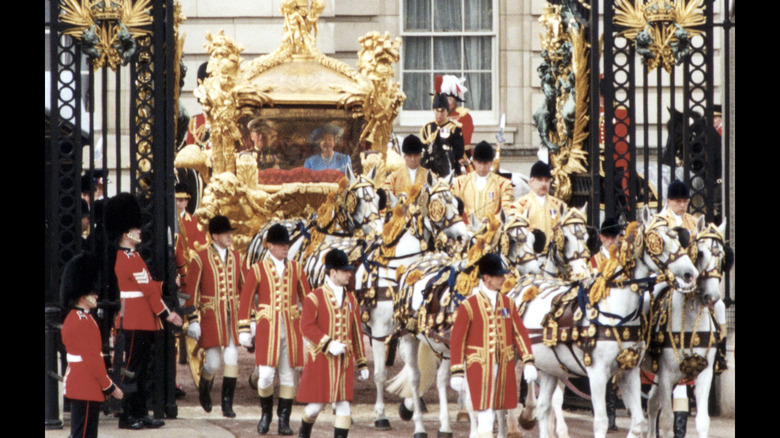 On August 7, 2002, England’s Press Secretary published a document listing fifty facts about Queen Elizabeth’s Golden Jubilee celebration, which acknowledged her fiftieth year as Queen (one fact for each year of her reign). The statement began, “As well as a celebration of Her Majesty’s 50 years on the throne, The Golden Jubilee has been an opportunity for The Queen to express her thanks to people, both personally and officially, for their support and loyalty over her reign” (via Royal.UK).

Queen Elizabeth and her late husband Prince Phillip spent the majority of 2002 on a world tour, during which, according to the official statement, the royal couple “met with people of all ages, religions and nationalities, travelled on myriad methods of transport, hosted numerous receptions, garden parties and two major concerts, and taken part in more than 50 walkabouts.” In fact, Queen Elizabeth managed to visit 70 cities and towns in England, Scotland, Wales and Northern Ireland between May and August alone.

The crowned jewel of the celebrations, however, took place during the Central Weekend in June, which featured a star-studded pop concert, a noteworthy speech from the monarch herself, and several other celebrity-filled events. 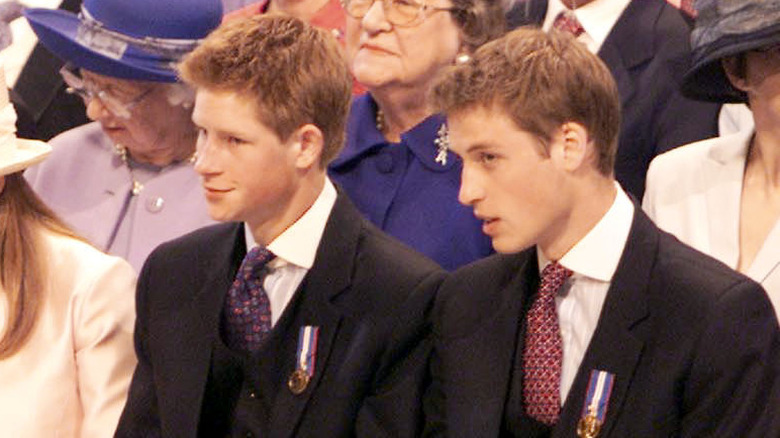 During a procession through Windsor, which is west of London, thousands of people lined the streets to catch just a sight of their beloved queen (via CNN). Later that same night, The Queen hosted a “Party in the Palace” at Buckingham Palace, which featured a pop concert. The lucky audience members were selected by lottery, and what a show they got to see! Sir Paul McCartney, former Beach Boy Brian Wilson, Sir Elton John, Joe Cocker, Eric Clapton, Sir Cliff Richard, Dame Shirley Bassey, Will Young, Atomic Kitten, Mis-teeq, Phil Collins, Blue, Spice Girl Emma Bunton, Tom Jones, S Club 7, Aretha Franklin, Annie Lennox, Steve Winwood, Rod Stewart, Ricky Martin and The Corrs all performed for The Queen and her guests.

Younger royals who are now household names excitedly attended the concert that night, including Prince William (then 19), Prince Harry (then 17), Princess Beatrice (then 13), and Princess Eugenie (then 12). Countless others who were not fortunate enough to make it into the show were able to join in by filling the local public parks, where the concert was broadcast live on large screens. The concert was also available to watch on television, and it garnered 200 million viewers worldwide (via Royal.UK).

Fireworks and other events 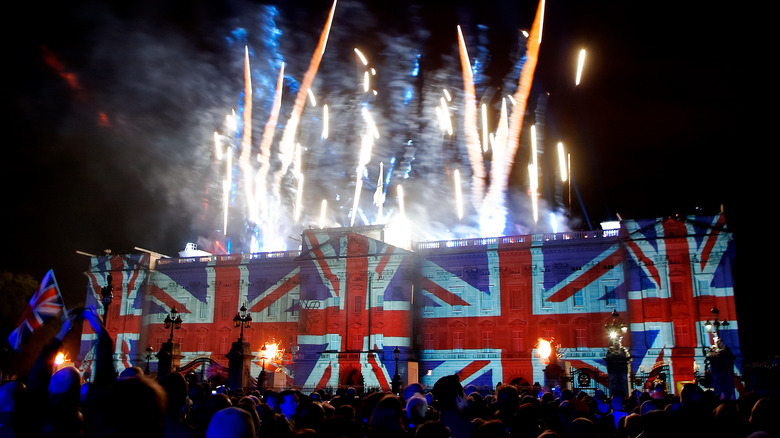 The pop concert, while impressive, wasn’t the only event that left people’s jaws agape during the celebratory weekend (via Royal.UK). Twenty-seven military airplanes flew over Buckingham Palace, including RAF C17 Globemaster, Concorde, and the Red Arrows whose chem trails were red, white, and blue to match England’s flag. There was also a fireworks display shot from the roof of Buckingham Palace and also in Green Park, which used a whopping 2.5 tons of fireworks. Some of them reached impressive heights of 800 feet. 2,006 beacons were lit all over the world at once time. The chain ran from England and included beacons in places as remote as the South Pole. It was the largest chain of beacons ever to be lit.

There was also a Jubilee parade that processed down the Mall, which included 20,000 people, 5,000 of whom were in a choir, singing to the masses. A million people gathered to watch this parade. And another parade of historic nature took place over the weekend; for the first time in history, all Her Majesty’s bodyguards paraded together. The 300-guard parade included people from the Gentlemen at Arms, which was founded by King Henry VIII in 1509, from the Yeoman of the Guard, founded by King Henry VII in 1485, and the Yeoman Warders, which is thought to date all the way back to the eleventh century. Five hundred miles of cabling were laid in London so that these events could be broadcast globally.

Difficulties for Queen Elizabeth during the Jubilee 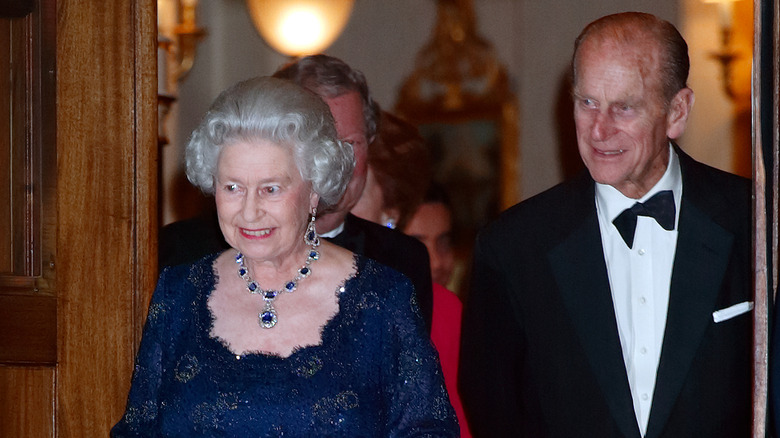 As spectacular as the Golden Jubilee celebrations were, the time was not without its difficulties for Queen Elizabeth and her family. During 2002, sadly, The Queen lost both her mother and her beloved sister, Princess Margaret (via Express). Princess Margaret passed away just three days after the fitieth anniversary of Queen Elizabeth’s coronation. Margaret was 71 at the time of her passing and had suffered a stroke that caused cardiac issues. Only weeks later, on March 30, 2002, The Queen Mother, also named Elizabeth, passed away at the age of 101 with her daughter, The Queen, by her bedside.

In the August 2002 statement from the Press Secretary about The Queen’s Golden Jubilee, this sadness was also mentioned along with the fifty facts the public may not have known about the celebration. The statement read in part, “it has also been a very sad time for The Queen who lost both her mother and her sister within seven weeks” (via Royal.UK). No doubt, that even with all of the beautiful, historic celebrations that occurred during Queen Elizabeth’s Golden Jubilee, her heart must have, at times, been heavy from these losses.

To add insult to injury, a small fire broke out at Buckingham Palace during the very weekend of the Jubilee celebrations (via CNN). While it was contained quickly, it did send smoke pouring from the roof and disrupted the rehearsals for the Party at the Palace pop concert. Nonetheless, the concert went ahead as planned. 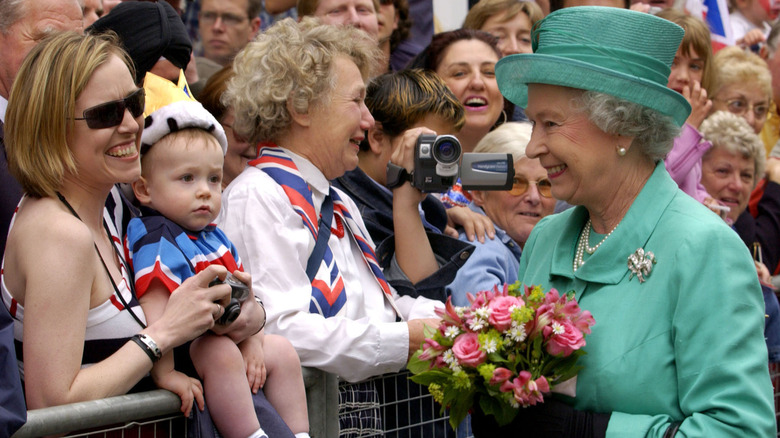 To know how Queen Elizabeth felt on the occasion of her Golden Jubilee, something no British monarch had achieved since Queen Victoria (via Royal.UK), we need only read the speech she gave at the time. With regard to the global tour she made in 2002, The Queen said, “At every stage along the way, Prince Philip and I have been overwhelmed by the crowds waiting for us and deeply moved by the warmth of their welcome” (via CNN).

She also addressed, quite pointedly, how far the country had come since the horrors of WWII, which had ended just before her reign began, yet acknowledged that there was much still to do to ensure everyone in her country truly prospered, saying, “It has been a pretty remarkable 50 years by any standards. There have been ups and downs, but anyone who can remember what things were like after those six long years of war, appreciates what immense changes have been achieved since then … Not everyone has been able to benefit from the growth of wealth and prosperity but it has not been for the lack of political will. I think we can look back with measured pride on the history of the last 50 years.”

JANET STREET-PORTER: All I want for Christmas is a set of clear rules