Bob Dylan’s songs come lurching out of Conor McPherson’s play obliquely, like the clues to a cryptic crossword. In most musicals you feel the text swelling towards an inevitable gush of song, but not here. The characters sing at McPherson’s whim, the lyrics to the 22 Dylan songs he uses never advancing the narrative and only circuitously presenting the characters’ inner lives. Yet, weirdly, it works, so you can’t imagine this McPherson play without the songs, which in turn are illuminated afresh by the drama – albeit it in a muted way.

McPherson’s text is like a mini-series shrunk to the length of a play, so numerous are the plot lines and characters. Rather like being asked to lend money to someone you’ve just met, McPherson asks us to invest ourselves emotionally in these characters on what would be the flimsiest acquaintance – were it not for those songs. 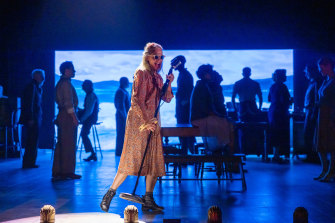 Lisa McCune has set the standard for the cast to follow.Credit:Daniel Boud

Text and songs converge on a deeper level than a mere story. McPherson, like many Irish playwrights before him, imbues his work with a sense of mythology: that what these poor sods are enacting is timeless; was already happening when the now-rounded hills had jutting peaks. Similarly, Dylan’s songs depict a version of life that has a spiritual – or, if that troubles you, magical – dimension. This feeds McPherson’s mythologising: thickens it, deepens it, and creates this improbable shorthand that relieves him of the need to spell out his stories and characters as if merely solving a quick crossword. The combination of play and songs seeps through you like a slow-acting drug, and gradually you find yourself caring.

That story is set in Duluth, Minnesota (Dylan’s hometown) during the Great Depression. Amid a cast of 19, McPherson hurls 13 named characters at us: either losers or losers struggling to dig themselves out of the stinking hole in which life has tossed them like human waste. 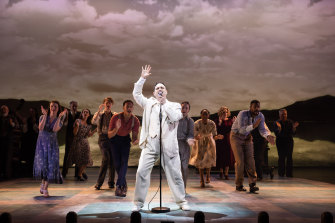 Blake Erickson belts one out in Girl from the North Country.Credit:Daniel Boud

Although without clear protagonists, the show does contain a love story between Marianne (Zahra Newman) and Joe (Callum Francis), the former adopted and now pregnant to an unknown father; the latter fresh out of a spell of wrongful imprisonment, and a boxer by trade. Black Marianne was adopted by white Nick (Peter Kowitz) and Elizabeth (Lisa McCune), the former running a down-and-out hostelry; the latter living in a twilight world of dementia. Amid labyrinthine plot lines, Nick’s having an affair with Mrs Neilson (Christina O’Neill), and is keen to marry Marianne off to the antique Mr Perry (Peter Carroll) before the banks foreclose on his guesthouse.

McPherson’s Australian cast feels slightly under-rehearsed, its chemistry not yet fully gelled, with one overwhelming exception: McCune’s Marianne. This was a towering performance, an almost unrecognisable McCune creating a frayed semblance of a human being, while also offering the night’s finest vocal performance when singing Like a Rolling Stone. Other notable singers included Francis, O’Neill and Blake Erickson, while the most striking remake was I Want You: dramatically slowed, and shared between Nick’s son Gene (James Smith), a sloshed wannabe writer, and his girlfriend Katherine (Elizabeth Hay).

Simon Hale’s arrangements locate the songs within a folksy 1930s idiom, with piano, fiddle, guitar, bass and drums. Were Rae Smith’s sepia-toned design a kitchen table, it would be scrubbed rather than polished and is marvellously evocative of its era.

The ending is like a Dylan song: you take out of it whatever desolation, waste, hope or even redemption you find there. Now the whole cast needs to lift to McCune’s level.

Amazon workers could soon be assembling furniture upon delivery