‘The Goldbergs’ is back for season 9 and there’s a wedding on the way! HL got EXCLUSIVE scoop from Hayley Orrantia about the status of Erica and Geoff’s wedding, honoring George Segal, and more.

The Goldbergs remains one of ABC’s comedy staples on Wednesdays. The show came back for its ninth season and honored the late George Segal, who played the beloved Pops. George passed away in March 2021 at the age of 87. Erica and Geoff decided to have their wedding at Pops’ favorite place, the tree where he proposed to his wife.

Erica and Geoff are now engaged, and Hayley Orrantia hinted in our EXCLUSIVE interview that we will see these two fan-faves get married by the end of the season. She also teased more season 9 scoop, including that Beverly goes a little overboard with the wedding dresses. Read our full Q&A below: 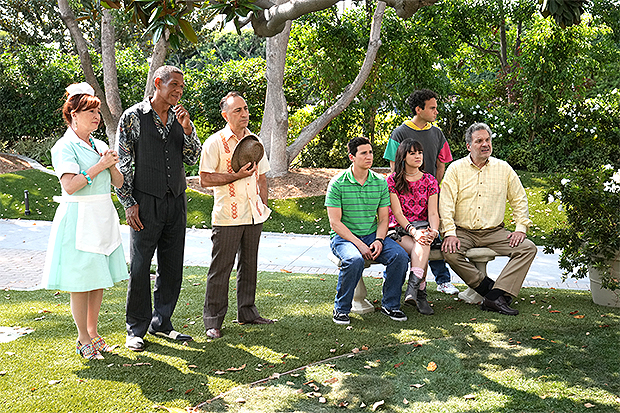 The Goldbergs returned for season 9 with a touching tribute to George Segal. As someone who worked alongside George for so long, what was it like paying tribute to him in such an emotional episode?
Hayley Orrantia: I felt like at some point you’re like, ‘Okay, I’m tapped out of tears. I can handle it.’ But last night I was not. It’s been kind of rough, to be honest, coming back. It just feels a little different, like there is something missing. So it was really nice to be able to have this first episode for the cast and crew to honor him in this way and grieve together again because we were all together when we first found out last season. It’s great that we can be all together during that time, and I’m so glad that it did resonate with other people. He just meant so much to so many people and was such a talented actor. Honestly, we’re so lucky to be able to work with him as long as we did.

You could feel the energy and the love between all of the cast in the episode. Erica and Geoff did decide to get married at Pop’s favorite place. Will we see their wedding this season?
Hayley Orrantia: I believe you will. I have not read the actual script where it would take place so I can’t 100 percent confirm that it’s happening, but I feel like that’s what we’ve been building up to this whole season. Sam and I have got a ton of storylines where it’s involving wedding planning and picking the dress, of course. Beverly gets a little too involved as she does so there’s a lot of storylines involving the wedding to lead up to. I have a feeling closer to the end of the season, you might see the actual wedding.

After seasons of will-they-or-won’t-they, how does it feel for Erica and Geoff to be so concrete?
Hayley Orrantia: Honestly, it’s so exciting because I feel like I’m just a fan of the show half the time, so I’ve been rooting for Gerica for a long time. It’s very exciting that it’s finally all coming together. It’s our version of Jim and Pam if you will. Sam [Lerner] and I absolutely have a blast working together on set, so the more that we get to do that with our storylines together, the better.

Have you thought about Erica’s dress? The ’80s were quite a time for wedding dresses.
Hayley Orrantia: Yes. Actually, I just did a fitting the other day. We had to try on a series of ’80s dresses, and I’m very excited because I think they’re going to try to pull in a way for you to see multiple versions of what would be a 1980s wedding look. It’ll be a really funny episode, I think.

Aside from the wedding, what else is Erica going to be up to this season?
Hayley Orrantia: I feel like that’s been the center of her world. Obviously, the inlaws are a big part of it as well, so we have quite a few storylines where you’re starting to see her pulled in the direction of what holidays do I spend with who and just trying to get more of a deeper relationship with Geoff’s parents. They’re really becoming joining families. Overall, it’s a lot about the wedding. 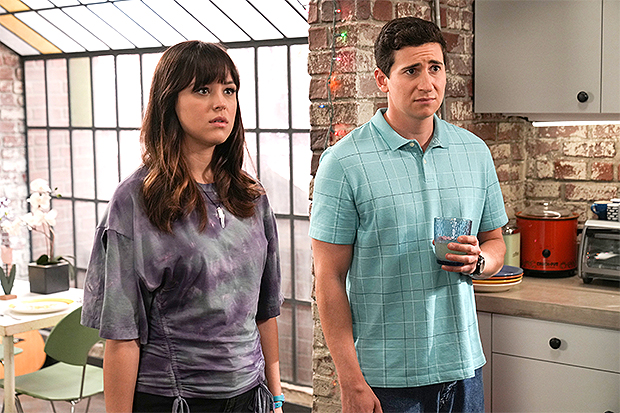 It’s almost hard to believe The Goldbergs is in its ninth season. Have you felt the weight of that? It feels like the show just started yesterday.
Oh, absolutely. I had a pinch-me moment several times at the beginning of this season because when you first audition for a pilot like I did, you have no idea if you’re going to get on it much less if it takes off. To be in our ninth season and looking back over all these years is just wild. I feel like we’re all incredibly grateful that we’ve gone this long because, truly, we just have so much fun on set. Two days ago, I was in tears crying in a scene with Troy [Gentile] and Sam. It’s that kind of stuff that’s like, you know, this doesn’t feel as much like a job as it is just getting to hang out with family and make something really fun that resonates with people. The longer we can go, the better in our eyes.

In addition to The Goldbergs, you are stepping outside the ’80s with the holiday film The Fight Before Christmas. What was it like being in the present day a little bit?
Hayley Orrantia: It was really fun to get to do that movie. I haven’t done much since starting The Goldbergs, so it was a really cool departure of sorts, but still in the comedy realm. I got to do a little more physical comedy and just sort of amp it up, whereas on The Goldbergs I’m kind of known for being the straight guy in all the scenes because I work with such ridiculously talented improv actors. It was really fun to challenge myself in that way, and it’s a funny oddball comedy about my character who comes back home for the holidays and finds out that her dad is dating her high school frenemy. She’s trying so hard to break them up before Christmastime, and it was really fun to get to film. I worked alongside Dermot Mulroney and Janel Parrish. It was just a blast.

You are also a super talented singer. What’s the status of your music? Do you have new music coming out this year?
Hayley Orrantia: Well, I did write a song for the movie coming out. We’ll be releasing that independently. The movie’s not doing a soundtrack, but it’ll be in the movie. It’s called “The Same Way.” I’m really excited about that. This is the second movie I’ve done where I’ve acted as well as written the song for the movie. I’m excited to kind of carry that on in this, but as far as other music goes, I discovered during this pandemic that I was kind of on this track of just releasing music as I was writing it. This is the first time I’ve allowed myself the time to be able to sit and just write as many songs as possible just to really find the ones that shine through all of them. So, as I’m in that process, I’m still picking the few that I’m ready to release. Hopefully, it’s a full-length album. Fingers crossed that’ll be done by 2022.

Taylor Swift’s version of Red is coming out later this year, which was her big move from country to pop. Have you ever thought about doing pop? Have you thought about going back and forth between the genres?
Hayley Orrantia: I’m so glad you asked that, and you’re the only one who ever has. I have been someone that has really struggled with labeling myself with a new genre, and I feel like I have taken on country because it’s just easier for people to compute when you put a label on it and they can say, oh, your country or your country-pop or whatever. I was comfortable saying that because, from a songwriting aspect, it just naturally happens that way. But lately, everything has been just very coming back to my roots of like singer-songwriter and a lot just me and a piano, something a little soulful, maybe something with a little nod to a little more rock. It’s been really fun to take this time to see exactly what genre I want to do next. I don’t have a label for it, nor do I really want one, and that’s kind of been the exciting part of that.

Can You See If You’re Blocked Or Unmatched On Bumble? Here’s What You Should Know

Bring the outdoors inside with these awesome planters and gardening accessories