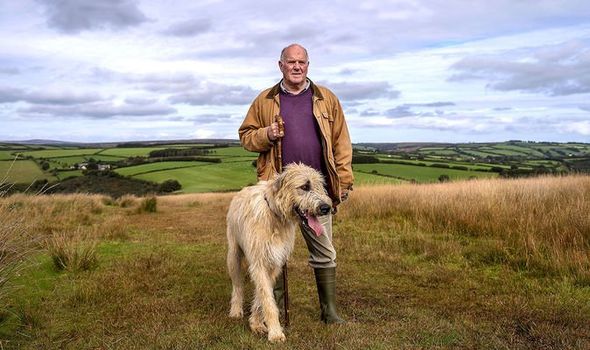 Indeed, he showed such outstanding bravery under fire and proved such an inspiration to his “flock”, some of the toughest soldiers in the world, he was eventually recommended for the Military Cross. To the annoyance of comrades who had witnessed his courage, this was later downgraded to a Mention in Dispatches.

Throw in a few more of his exciting former roles and it becomes clear that Cooper is no ordinary retired clergyman.

I learned about Padre Cooper’s extraordinary exploits while researching my new book, Falklands War Heroes. However, it was only after it went to press that I was able to track him down, interview him and can now tell the full story of his remarkable life.

Despite never firing a gun in anger, he was a crack shot and represented Great Britain at target shooting many times. He also advised A-list actors on how to fire a rifle, was the Chaplain at Eton College when Princes William and Harry were there, and carried out dangerous security work in Iraq in the aftermath of Saddam Hussein’s overthrow.

Cooper was born in Leeds, Yorkshire, in 1944, the elder of two children. His father worked for the Prison Service and, before that, had served full-time in the Royal Navy.

After reading theology at London University, Cooper was ordained and later became a curate in West Leeds. However, he was attracted by the structure and discipline of military life and joined the Army on a short-term commission as a chaplain in March 1973 at the age of 28.

Six years later he switched to a full-time commission and was appointed as chaplain to 2 PARA, having already served in the same role with both 3 and 1 PARA.

Before the outbreak of the Falklands War in April 1982, he completed four tours of Northern Ireland at the height of the Troubles when death and injury for British servicemen were all-too common.

Having learned to shoot while still at school, he continued his hobby into adult life and was a member of the National Shooting Centre at Bisley, Surrey.

“The appeal of shooting to me was, like yoga… it is all about personal control,” he said.

Initially, after the Argentine invasion, 3 PARA was chosen to go to the Falklands while 2 PARA prepared for a tour of Belize.

However, 2 PARA, whose Commanding Officer was Lieutenant-Colonel Herbert “H” Jones, was later given the green light to go to war too.

Cooper regarded “H” as a “friend” and the 2 PARA Adjutant, Captain David Wood, as a “close friend”.

“An Army chaplain has a welfare role and accompanies soldiers wherever they go. He has to be able to keep up with them in both peace and war, and not be a hindrance,” Cooper explains.

“Occasionally, a chaplain also has to provide a moral steer because at times, for soldiers, destruction can become too easy.”

2 PARA sailed 8,000 miles to the Falklands from Portsmouth on board MV Norland, a car ferry requisitioned as a troop carrier for some 1,000 men. On their voyage the crisis with Argentina escalated and British ships, including HMS Sheffield, above, were sunk. Cooper tried to prepare young soldiers mentally for their first experience of war.

He was aware, he said, that, “the battlefield doesn’t give you the opportunity to do what is natural after a personal loss, which is to grieve. All a soldier can do is put the experience into a cupboard at the back of his mind. He then has to close the door and get on with what needs to be done. Eventually, however, that cupboard becomes full of the most appalling sights, sounds and experiences, possibly linked to a feeling of fear.”

At one point on board, he helped “zero” the night sights on rifles – to ensure the bullet goes in the intended direction. It was not a task for the typical Army padre.

Shortly before arriving at the Falklands, Cooper, then aged 37 and in the rank of major, delivered what he jokingly called his “Henry V speech” to the men on board in the ship’s forward lounge. He summarised his address to me: “I said that I didn’t believe in a God who could divert the path of a bullet, but I did believe in a God who had the capacity to care for an individual both this side and the other side of death.”

He finished by saying his next service would be in Christ Church Cathedral, Stanley – after a British victory on the battlefield.

Cooper was told that once on the Falklands he would be based at the Regimental Aid Post (RAP) with Steve Hughes, the battalion doctor, and others but “H” had asked him to collect casualties and get them back to the RAP. “But initially we had no stretchers, only ground sheets, on which to carry casualties,” he recalled.

Once 2 PARA arrived in the war zone, they were moved to East Falkland by landing craft in Ajax Bay. From there, the orders were to head south up Sussex Mountain and dig in before eventually advancing towards Goose Green. At night, all the Paras slept in the open air in sleeping bags, when it was cold and often wet.

Even before the main fighting got underway, Cooper came under mortar fire while visiting a 2 PARA position near the frontline. After a series of frustrating delays, and after more Royal Navy ships were successfully bombed by the enemy, the battle for Goose Green began in darkness in the early hours of May 28. For the next 14 hours there was vicious fighting.

“We were never much more than half a kilometre from the front line,” he said. “At one point, we heard this drumming noise and a herd of wild horses ran through us. Soon after that a burst of machine-gun fire went close over our heads. On another occasion a bullet was deflected by my hip flask. Being a good chaplain, I always carried a flask of whisky in my breast pocket.”

During the battle for Goose Green, 16 Paras were killed and 64 wounded. Throughout the night and the next day, Cooper treated the wounded and, once the fighting was over, collected the dead, including some from a minefield.

Two of the casualties were Colonel “H”, later awarded a posthumous Victoria Cross, and Captain Wood, the Adjutant.

Cooper had officiated at the wedding of another of the dead men, and, later, christened his first child.

At a service after the battle, the Chaplain read out the names of all the dead. Cooper regarded “H” as a strong, committed and charismatic leader but one with quirks, including a short fuse.

Some later criticised the CO for being too close to the frontline and too reckless with his own life and those of his men.

Cooper does not share that view: “We needed leadership at that time and he wanted to lead by example.”

After the Argentine surrender on June 14, the padre carried out his earlier pledge to hold a service in Christ Church Cathedral, Stanley. This was filmed and later broadcast by the BBC and Cooper was heard using the phrase “think on”.

He told me this was a northern phrase: “It really means think about what has happened and what you have done.”

The incident that upset and angered Cooper the most, however, was when three PoWs volunteered to move an Argentine ammunition dump only to discover too late it had been booby-trapped with explosives.

Cooper choked back tears as he said: “One was killed outright, one was slightly injured and the third one had to be dragged out of the flames. He had lost one leg at the hip, one leg just below the knee and he had lost an arm.

“He had a gash from his Adam’s apple down to his navel. I treated him and I was conscious of avoiding getting hit in the face by the splintered ends of his legs that were thrashing around.”

The man later died and Cooper felt incensed the Army had failed in its duty of care to these PoWs, even if the three men had been killed and wounded by a device laid by their own side.

Once back in the UK, the Paras had six weeks’ leave, but he spent the time visiting the families of dead soldiers and arranging several funerals.

“In every case, they gave me more than I gave them in terms of how they took their bereavement,” he said, again shedding tears.

Cooper retired from the Army two years later and became Chaplain of Eton College, a post he held for 20 years.

He considered the pupils of the top public school to be “sound lads with an extraordinary social conscience”.

He also acted as an adviser to Pierce Brosnan and Halle Berry, teaching them how to pass as snipers for their roles in the James Bond film Die Another Day.

From 2005 to 2007, he worked in war-torn Iraq as head of civil affairs for Aegis Defence Services and came under attack from insurgents several times.

Today Cooper lives with his second wife, Jo, in a six-bedroom farmhouse near Dulverton, Somerset, set in 70 acres of rolling farmland.

Aged 77, he still carries out charity work and remains in touch with many former war veterans, helping some come to terms with their injuries and PTSD.

Looking back on the war nearly 40 years on, he regrets the loss of life but he considers it was justifiable because it was the only way to give more than 1,800 islanders their freedom back. However, he added: “For me, the main tragedy is that men will give so much for war and so little for peace.”

● Lord Ashcroft KCMG PC is an international businessman, philanthropist, author and pollster. For more information on his work, visit lordashcroft.com. Follow him on Twitter and Facebook: @LordAshcroft. His new book Falklands War Heroes by Michael Ashcroft is published by Biteback and is available from the publishers or Express Bookshop. See falklandswarheroes.com

8 women share the best advice they ever received about breakups

The Royal Family Has Surprising Rules When It Comes to Tiaras