Taylor Swift isn’t afraid to portray herself as a victim of men depicted as caddish, even if it’s only as a preamble to emerging victorious. And it’s a dynamic she wields to devastating effect in All Too Well: The Short Film.

This 14-minute music-video-with-dramatic-bits depicts a young woman at the mercy of an older man’s emotional dishonesty. Though he’s unnamed in the song, which was originally released in 2012 and has now been re-recorded for her album Red (Taylor’s Version) – part of her campaign to regain control of her back catalogue – Swift’s fans believe it to be Jake Gyllenhaal. 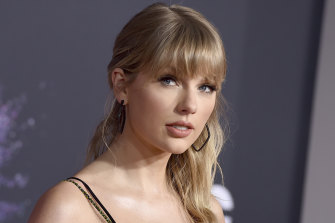 Since her back catalogue was sold (and sold again) Taylor Swift has set about re-recording her first six albums.Credit:AP

And now, prompted by the video written and directed by the 31-year-old Swift, they have turned on the 40-year-old actor on social media with the fury of a fanbase scorned.

“You kept me like a secret but I kept you like an oath,” Taylor sings in reference, the internet is certain, to the three-month affair between a then-20-year-old Swift and the then-29-year-old Gyllenhaal some 11 years ago. “You said if we had been closer in age maybe it would have been fine, and that made me want to die.”

The film stars Sadie Sink as “her” and Dylan O’Brien as “him”, and is full of gorgeously cliched Notebook-style images of romance: dewy-eyed drives into the country; spontaneous piggyback rides through an autumnal forest; wine and cheese in front of a roaring fire. But then comes the crash: the hand spurned at the dinner table; the lonely wandering through an older crowd at an art opening; the angry scene in the kitchen after the guests have gone home. Oh, and the scarf.

“You keep my old scarf from that very first week, cause it reminds you of innocence and it smells like me. You can’t get rid of it cause you remember it all too well.” 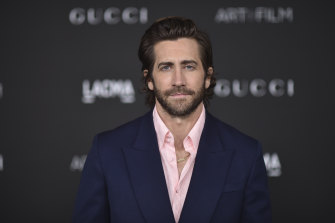 How did it come to this? Jake Gyllenhaal has suddenly found himself the most hated man in the Twitterverse. Credit:Richard Shotwell

Taylor is a great storyteller and a not-bad director, and there’s bound to be some sort of power imbalance in any relationship between a 20-year-old and a 29-year-old. But I’m wondering if the dice aren’t just a little loaded here.

The film’s Taylor avatar clings to Fake-Jake like a limpet, with no boundaries when it comes to public displays of affection. Little wonder, perhaps, that he shrugs off her hand at dinner with his mates, unknowingly in his telling, callously in hers. She has a finely tuned sense of offence and a fiery temper, as seen in the kitchen-sink argument scene (almost an exact copy of one from the 2009 video for Mine, which Swift also directed).

She refers to herself as “the one true thing you’ve ever known”. In a scene set 13 years later, the older Fake-Jake stands outside in the snow (still wearing that regret-scented scarf), gazing longingly at the older, wiser narrator (the actual Taylor Swift) as she reads from her novel All Too Well. A poster declares it “a stunning debut”.

In case you haven’t got the message yet, Taylor wins.

Swift has built a career on turning crash-and-burn love affairs into superb tell-all pop songs. In her world, romances start like Mills and Boon and end like Burton and Taylor. Almost without exception, she is the injured party. It’s emotionally, lyrically and musically compelling, but there’s not much room for the idea of two sides to every story.

In a sense, Swift’s campaign to re-record her past works is all about having the last word too. And in this it’s hard not to support her.

She was furious when Scott Borchetta, boss of her old label Big Machine, sold the rights to her first six albums in 2019 to music manager Scooter Braun, with whom she’d had a long-running feud (Braun onsold a chunk of those rights to a private equity firm last November). So she has set about re-recording, virtually note-for-note, those six albums, to be released under her new and vastly improved deal with Universal.

Red (Taylor’s Version) is the second album to be released under this arrangement, following Fearless earlier this year, and its impact on the value of the original recordings is likely to be significant. 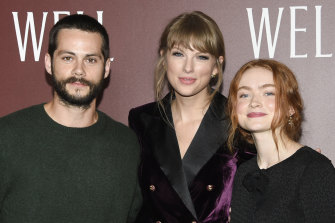 Writer-director Taylor Swift, centre, with Dylan O’Brien and Sadie Sink, the stars of her short film All Too Well.Credit:Evan Agostini

The original 2008 recording of Fearless was dislodged from the Billboard top 200 album chart in April when the new version debuted at number one. The new version of Red has again made Swift the most streamed artist in the world. Her short film has racked up more than 32 million views on YouTube in just three days.

Perhaps most importantly, when it comes to licensing Swift’s music for movies, TV shows and commercials in the future, it’s likely to be her versions that get precedence. No brand or show will want to risk a backlash from the fanbase like the one Jake Gyllenhaal has had to deal with over the past few days.

She may occasionally cast herself as the victim, but whether she’s taking on a label or an ex-lover, Taylor Swift is anything but. The importance of controlling the narrative, and turning it to her advantage, is something she knows all too well.

Dickinson is sexy, strange and seriously good – it’s the surprise feminist hit of the year