Federal Energy and Emissions Reduction Minister Angus Taylor will press the world’s leading nations to improve their climate emissions reporting ahead of a global summit, arguing that all countries need to be held accountable for their targets.

Mr Taylor used a speech to the Australian British Chamber of Commerce to say the importance of implementing the Paris Agreement had been lost amid the ongoing debate about new emissions targets. 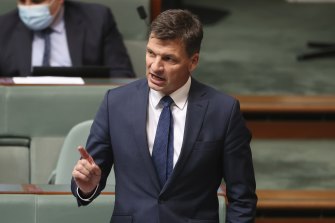 Energy and Emissions Reduction Minister Angus Taylor wants other large economies to commit to transparent reporting of their emissions.Credit:Alex Ellinghausen

He warned the world will not hit net zero emissions without carbon offsets, saying Australian negotiators are focused on trying to find sensible compromises to support global action on climate change.

While Australia faces growing domestic and international calls to increase its ambitions to cut greenhouse gas emissions in the lead-up to a United Nations climate summit in Glasgow in November, Mr Taylor said without transparency there would be no accountability.

“All of the world’s largest economies should meet reasonable minimum reporting thresholds,” he said.

“Australia is a leader in that regard – we report for every sector, every gas, every quarter – and that transparency has driven progress. It has held governments of either stripe accountable for the commitments they have made.”

The Coalition remains divided on whether it will increase its current climate targets and commit to a net zero target by 2050 ahead of the summit, with Prime Minister Scott Morrison still to confirm whether he will attend in person.

British High Commissioner Vicki Treadell said on Wednesday that her government would “very much would love” Mr Morrison to attend the summit, following his comments at the weekend that he remained uncertain that he would attend.

She told ABC radio the UK would be “very disappointed” if Mr Morrison did not attend but would ask for more ambitious targets from Australia in any event. She said to be certain to hit net zero by 2050 there needed to be “the means to measure progress”, which explains the “emphasis right now on the medium term 2030, 2035 targets”.

Former prime minister Malcolm Turnbull on Wednesday said the federal government should adopt a 2030 target of “at least” 45 to 50 per cent, following the NSW government’s promise to slash its emissions by 50 per cent in the same time.

He also urged Mr Morrison to attend the Glasgow climate conference, saying: “History is made by those who turn up. If Mr Morrison decides not to go to Glasgow, he is sending a message. His absence will send a strong message about his priorities.”

The government has set a target to reduce emissions by 26 to 28 per cent below 2005 levels by 2030. The latest quarterly data released shows emissions have fallen 20.8 per cent below the levels of 2005 following a 5 per cent drop during the pandemic.

A report by the Intergovernmental Panel on Climate Change in August found to have any chance of limiting the rise in global warming to 1.5C, the target set in the 2016 Paris agreement, the world needs to curb greenhouse gas emissions by 45 per cent by 2030 compared with 2010 levels.

On the basis of pledges by the 191 signatories to the Paris accord, emissions are on course to rise by 16 per cent by 2030, which could cause average temperatures to increase by 2.7C by the end of the century.

New modelling from the Greens estimated Australia could lift its target to at least 35 per cent following the more ambitious targets set by state and territory governments since Australia committed to its target five years ago.

“The states are doing so much heavy lifting that Scott Morrison now can align Australia with the US and UK by doubling to tripling our 2030 climate targets, as recommended by the independent Climate Targets Panel,” Greens leader Adam Bandt said.

Treasurer Josh Frydenberg said on Wednesday climate change was a “global challenge” that required “national solutions” and it was not a binary choice between the regions and jobs.

Opposition climate change spokesman Chris Bowen said the Morrison government was letting Australia down while states of “all political persuasions are getting on with it”.