Three years ago, Corangamite was the most pork-barrelled electorate in the country. The major parties threw everything they could at the ultra-marginal seat, promising tens of millions during the election campaign.

The voters might have rejected Liberal Sarah Henderson in favour of Labor’s Libby Coker, but government spending continues apace. 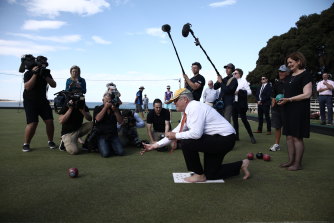 Scott Morrison campaigns with Sarah Henderson at the Torquay Bowls Club in Corangamite in 2019.Credit:Dominic Lorrimer

A special analysis by The Age and the Sydney Morning Herald of more than 19,000 grants made over the past three years shows Corangamite has been showered with more than $55.2 million. At the same time, the neighbouring seat of Corio, held by deputy Labor leader Richard Marles, got $7.66 million.

The breakdown of 11 grants programs over which MPs or ministers had direct control shows Coalition-held or targeted seats were heavily favoured with major and minor projects.

The haul in Corangamite puts it at 10th out of 151 electorates for the amount of money flowing in – one of just two Labor-held seats in the top 10. It also accounts for 10 per cent of all spending in Labor seats.

Ms Coker won Corangamite in 2019 for Labor with a one-point margin, beating the Liberal incumbent, who has since become a senator through a casual vacancy.

At the time, the seat took in the sweep of Victoria’s surf coast and Otways, running from the Bellarine Peninsula to Apollo Bay and Castle Cove. A redistribution ahead of the 2022 election has almost halved the electorate, concentrating it around Geelong’s outskirts.

The two largest grants in the electorate were to build swimming pools: $20 million for an aquatic centre in Torquay North and $10 million towards another in north Bellarine. Both projects were promised during the 2019 election campaign. Neither has been built yet. 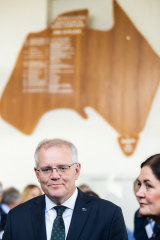 Prime Minister Scott Morrison responded to the analysis by saying it showed his government kept the commitments it made.

“That’s the electoral process and we have been very transparent about that,” he said on Thursday. “I can tell you if [voters] support our candidates, the commitments I make will be delivered.”

Liberal candidate Stephanie Asher, the Greater Geelong mayor, takes credit in her campaign biography for the north Bellarine outdoor pool. The council is developing plans for a second stage of the same project, an indoor centre, for which it wants the federal and state governments to find $45 million.

The Surf Coast Shire Council announced in November it had awarded the design contract for the Torquay North facility. It quoted Senator Henderson in its press release.

The many surf life-saving clubs along the popular coastal stretch were also big winners.

The Ocean Grove Surf Life Saving Club received five grants totalling more than $1.4 million, three of them in the months ahead of the 2019 election. This money went to upgrading the clubhouse, a commercial kitchen fit-out and then a further grant towards the fit-out of its restaurant and bar.

Point Lonsdale’s SLSC was given three grants to rebuild and furnish its “dilapidated” clubhouse.

The Jan Juc club received two grants totalling nearly $2.5 million to rebuild and upgrade its facilities. The Torquay club, located on the other side of a golf club and river, also got more than half a million for upgrades.

And Anglesea SLSC got $11,000 in November 2018 to upgrade its clubhouse to mitigate bushfire risk. Four months later, it received $1.1 million under a different grants program to redevelop the whole building.

Elsewhere in the seat, the Apollo Bay WinterWild festival got grants of more than $21,500 two years in a row, one to fund bus tours of the Otways and the other for a street parade. Another $10,000 went to the Surf Coast Shire Council to establish a public orchard at a Torquay playground. Several sailing and boating clubs also received funds to buy more vessels.

In Corio, which takes in urban Geelong and its northern suburbs, the largest grant was $5.5 million towards building a hospice. The same project received three other grants, allowing it to buy a bedpan disinfecting machine and three oxygen concentrators.

The next largest grant was $500,000 for the City of Greater Geelong for a sports ground.

Money is expected to keep flowing into the region in the coming election. Since October, the government has already given more money to the hospice and an expansion of a Lorne sculpture festival.

Labor has promised $20 million for yet another aquatic centre, this one at Drysdale, a 10-minute drive from the Bellarine pool the Coalition is funding.

Last week, Mr Morrison was in campaign mode at an afternoon tea at Torquay Surf Life Saving Club. A local reporter asked him if he supported plans for a Big Ute in Geelong.

“How good are utes? And how good would a big ute be?” Mr Morrison replied.

Geena Davis Recalls Uncomfortable Audition: ‘I Didn’t Know You Could Say No’

Elon Musk Is Selling All 6 of His California Homes: See Inside