Victoria’s chief health officer has warned against ending mandatory COVID-19 isolation as NSW Premier Dominic Perrottet pushes for the restriction to be scrapped, while Prime Minister Anthony Albanese refuses to release the advice behind reducing the period.

In his written advice to Victorian Premier Daniel Andrews, Professor Brett Sutton warned that COVID-19 “remains a serious risk to health” and counselled against ending the pandemic declaration under which the state can order citizens to isolate. 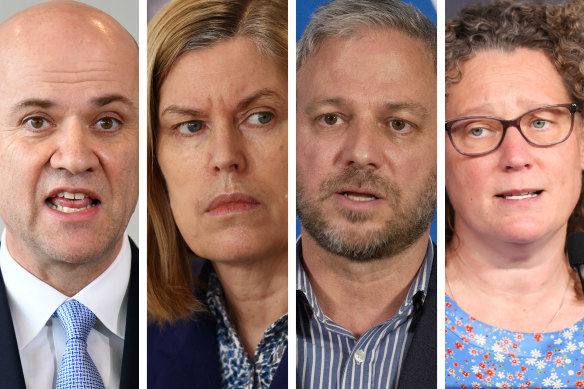 The chief health officers of Queensland (John Gerrard), NSW (Kerry Chant), Victoria (Brett Sutton) and the ACT (Kerryn Coleman), who are all members of the Australian Health Protection Principal Committee.Credit:SMH, The Age and Getty Images

Without mandatory isolation of positive cases and other remaining measures like masks in high-risk settings, Sutton wrote, “there would be a substantial and sustained increase in cases, hospitalisations, and deaths in Victoria from current and future waves”.

He pointed to evidence “from multiple overseas jurisdictions” showing that the ending of public health measures was “associated with significantly higher COVID-19 infections, hospitalisations and deaths”.

His advice is dated August 29 and tabled in the Victorian parliament on Friday in accordance with the pandemic bill passed in December. No other state or territory’s advice on the latest pandemic health settings has been made public.

“It is acknowledged that the pandemic declaration and its public health requirements cannot be extended indefinitely,” Sutton wrote, while recommending it be extended until October. 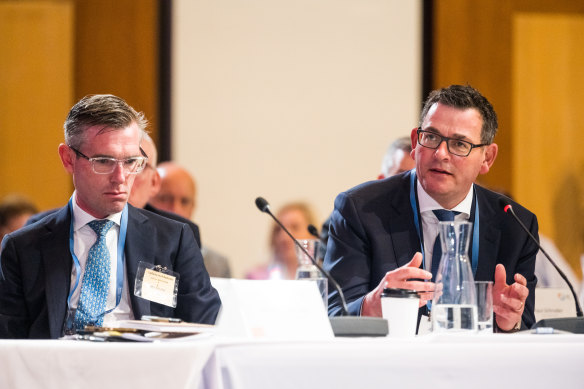 Perrottet on Friday called for the mandatory isolation period to be scrapped, two days after national cabinet – made up of state and territory leaders and the prime minister – decided to reduce it from seven to five days for those who no longer had symptoms.

The change is due to come into effect from September 9, when mask mandates will also end on domestic flights.

“I believe we need to move away from public health orders, we need to move … to a system in which we’ll respect each other – if you’re sick, you stay at home, if you’re not sick go to work,” the NSW premier told Sky News on Friday.

“The state should not be enforcing these orders at this time in the pandemic,” Perrottet said, who said mandatory isolation should be removed entirely “as soon as possible”. 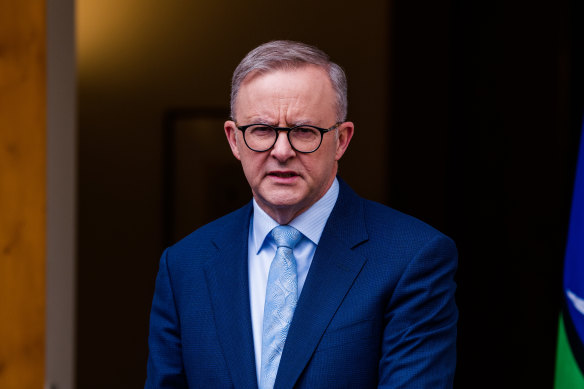 Albanese said it was appropriate that mandated restrictions be reviewed and gradually eased over time as more people are vaccinated.

Sutton said voluntary uptake of isolation “is likely to be limited” and pointed to a survey commissioned by the Victorian government in July that suggested compliance had fallen sharply since February.

A separate survey in August found almost a quarter of respondents were unaware of the current case isolation requirements and only a third of respondents who did isolate for seven days would have isolated for this duration if it were no longer mandated, he wrote.

The Australian Medical Association (AMA) has called on the prime minister to release the health advice provided to national cabinet by the expert advisory body the Australian Health Protection Principal Committee (AHPPC), to justify the shortened isolation, but he has refused to do so.

“The chief health officers in every state are responsible for their respective advices, so that’s a matter for the state governments as to whether that happens or not,” Albanese told the ABC on Friday, despite the fact it is the AHPPC that advises national cabinet.

Albanese said national cabinet was “now operating with one voice” instead of state premiers taking different approaches, but that doctors in the AMA “have different views, so do the different chief health officers have views”.

Acting national Chief Medical Officer Michael Kidd presented the AHPPC’s latest COVID-19 advice to national cabinet on Wednesday, which would normally be consensus advice from the committee agreed through discussion and debate among the nine CHOs.

But no statement summarising the expert body’s advice has appeared on the federal health department’s website, as is customary when national cabinet makes a significant change to public health restrictions.

Deputy Liberal leader Sussan Ley also called for the health advice to be published, noting that Albanese had promised to be more transparent about national cabinet.

Sutton wrote in his advice that Victoria was experiencing a significant level of sickness and death from COVID-19 and that it was significantly likely people’s immunity from both vaccination and previous infectious would wane through the remainder of the year.

This weakened immunity would, along with yet-to-emerge new variants and subvariants, cause “additional waves of increased transmission, hospital demand and serious health outcomes including death and post-acute COVID-19 conditions”, Sutton wrote.

He said expert modelling conducted in August estimated that without mandatory isolation of positive cases, compliance would have been halved and the number of cases, hospitalisations and deaths in the state “would have been at least 50 per cent higher in Victoria”.

Sutton said the United Kingdom, which lifted most public health restrictions in late February, including mandatory isolation, had then experienced a second Omicron wave with “similar severe outcomes” as the first despite the “substantial naturally acquired immunity in the UK population”.

During the first Omicron wave, Sutton wrote, 110,000 people were hospitalised in the UK with COVID-19 and 10,000 people died. In the second wave sparked by the BA.2 subvariant, beginning just a few months later, there were 97,000 hospitalisations and 15,000 deaths in March and April.