There are some cheerful echoes of the jaunty tone of the original Star Wars movies in the ninth and final film in the Luke Skywalker saga.

The director, J.J. Abrams, has some old-fashioned fun with the galaxy’s many tribes and with those durable favourites, Chewbacca and the droids. But he doesn’t leave much time for jokes or for romance in Star Wars Episode IX: The Rise of Skywalker. 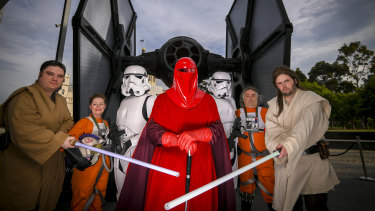 Star Wars fans in costume as the last movie in the franchise is released.Credit:Eddie Jim

Despite some clunky chunks of exposition, the action rockets along, powered both by its need to be more spectacular than ever before and the script’s desire to tie up the saga’s many loose ends. It’s a film driven by a weighty sense of its own history. It’s also full of ghosts. That of Carrie Fisher is only the most poignant.

Abrams has claimed that he didn’t have to resort to digital sleight of hand to resolve Princess Leia’s part in the storyline. There was enough unused footage from the seventh film in the series, The Force Awakens, to fill out her role and supply the emotional charge he needed. 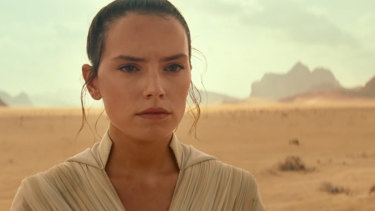 Daisy Ridley as Rey in The Rise of SkywalkerCredit:ninevms

You might also argue that a franchise that has outlived one of its stars should have said goodbye long ago but the saga’s box-office figures say otherwise. They have already shown that fans have bonded with the new generation of characters and that they’re depending on this, the finale, to solve all the remaining mysteries.

As to whether it does, only the most pedantic should complain. It’s a rousing finish to a series that has accompanied so many people throughout their childhood.

The First Song From Descendants 3 Is So Good, You'll Want to Get Up and Dance Along

Lil Nas X Talks About Backlash After Coming Out as Gay