Talking about her university experience so far, student Louisa Shapton admits that on some mornings, she would find herself just bursting into tears.

That’s because for Louisa, and many other students living in the shadow of a pandemic while hurtling headfirst into a cost of living crisis, uni life is nothing like it said in the brochure.

Remote learning, lack of friends and little appropriate or affordable accommodation have all taken away any first tastes of freedom university once offered to those looking to further education, and replaced them with a bitter dose of reality.

Louisa, who is studying sports conditioning, rehabilitation and massage at Cardiff Metropolitan University, says that not only did rocketing living costs put an end to her dream to live independently with friends, as she simply couldn’t afford to – it also made it harder to get involved more with university societies, events and rite-of-passage student parties. 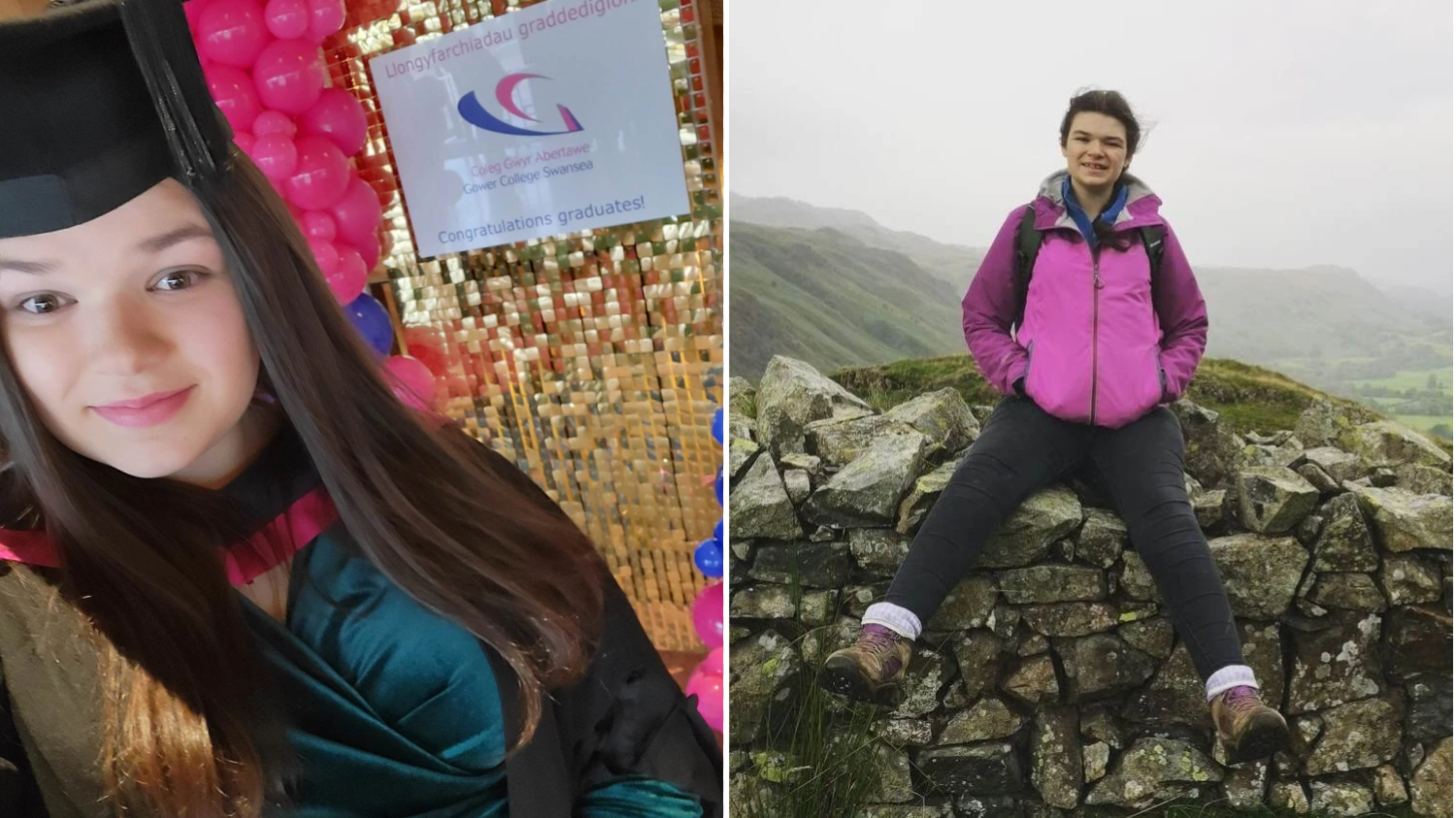 Having made the decision to stay at the family home in Swansea, nearly 50 miles away, it meant that at the beginning of the autumn semester in September, Louisa didn’t attend any of the freshers’ events.

As alcohol would inevitably be involved, the young student felt she would be too vulnerable once it was time to make her way home at the end of the night, and being so removed from the uni, she hadn’t had any opportunity to get to know fellow students that she might have been able to stay with.

Since then she’s spent the last five months leaving the family home every day to take a 6.30am train to university.

‘I know it isn’t ideal; I am spending more time travelling than learning,’ she says. ‘I then use my afternoons to explore Cardiff, find a coffee shop and study, to make the most out of it.’

Trying to find a silver-lining to her situation, Louisa adds, ‘living at home allows me to focus on my studies without distraction.’ But then she admits, ‘it does make me wonder if it will delay my readiness to move out.’

Having a 90-minute commute each way also means Louisa is unable to attend all her classes. Having reached out to her programme lead for help, she claims the response wasn’t very supportive and she was simply told she should take an earlier train. Combined with the train strikes currently causing chaos for commuters, travelling to university has taken a huge toll on Louisa’s stress levels.

Then, in November last year, just two months after beginning university, Louisa caught Covid. She says it was the final straw for her and hit home just how much the cost of living crisis had scuppered her expectations on student life.

‘My alarm would go off, and I’d lay in bed, aching all over,’ she remembers. ‘Then at about six, my mum would knock on my door to see if I was awake. I’d tell her that I was too exhausted to travel to university and attend lectures.

‘I should have been able to see a recorded lecture as there are many online resources to help us but sometimes things in the classes get talked about offline’ she explains.

‘Even when I tested negative, I wasn’t strong enough to commute. If I had been on campus, just a short walk away.

‘Some mornings I’d cry because mentally I was good and wanted to be in uni but the thought of getting on the train with loads of people, maybe raining, and a long day, I couldn’t do that, I could barely get out of bed. Now I’m struggling to catch up.’

With a new survey by the Office of National Statistics revealing that 40% of students have begun studying more at home rather than going to campus, to save travel money, Louisa isn’t the only one facing these struggles.

‘Around 2018, I started noticing that more students travelled from home rather than staying in the city,’ he tells Metro.co.uk. ‘The cost of living crunch has been happening for a while, and this has changed the way students approached university with rents shooting and landlord struggles.’

However, according to Matt, while remote learning has become more common, it’s not always idea and the impact may have long term ramifications.

‘After the pandemic we have digitised more, however, nothing can replace being in class with real students,’ he explains. ‘Being able to work in groups is where they learn people skills that are going to become increasingly important in the future of work.

‘These are the skills that employers are often looking for and they want to know that students have the ability to work in groups, to listen, communicate and negotiate around ideas.’

He also believes that it’s not just about learning.

‘What happens outside the lecture theatres is more important,’ he says. ‘That is when you make friends, network with people, and engage with the course in the true sense.’

It’s something that Charlie Sellar, president of Barts and the London Students’ Association, agrees with, telling Metro.co.uk of the importance of developing skills outside classes to become a ‘well-rounded person’. However, he says, there’s another issue at hand.

Most medical and dental students do not have the choice to move home due to their ‘nine to five unpaid duties at the hospital’, explains Charlie. ‘The cost of living crisis is harder for the medical students as they are working at the hospital alongside working part-time.

‘Universities and the government need to pay attention to the struggles of the student,’ he adds. ‘That’s why the union is looking to open up bursary schemes like hardship funds for students to allow them to engage with university events without any financial barriers.’

By the time 22-year old Nina White was informed by her university that she had got a scholarship to study a master’s in forensic linguistics, all the cheapest accommodation in the area had been snapped up.

She made the decision to study part-time and from home, but she still had to endure a two and a half hour commute from her home in Cheltenham, England to study in Wales once a week.

However, the aspiring lawyer admits she now struggles to make the most out of student life.

‘Living in the city of Cardiff would have helped me integrate more into my course and the university experience,’ Nina explains. ‘I feel isolated as I can’t meet up with coursemates during the week.

‘I partied quite a lot while doing my Bachelor’s Degree so I think I’ve got a lot of that out of my system, but I still enjoy going on a night out, and I have to admit, I sometimes feel like I’m missing out.’

Plus, Nina adds, there’s less financial freedom these days to enjoy student social life. ‘I’ve felt quite guilty at times when I’ve bought a pint down the pub,’ she explains. ‘I start telling myself “oh you could have just saved that money”.’

Studying remotely means that Nina, who has obsessive-compulsive disorder, has also seen an effect on her mental health.

‘Commuting has meant that accessing in-person support at university, such as counselling for OCD, is more difficult,’ she says. ‘It makes you feel incredibly cynical, as you’re trying to create a better future for yourself while constantly hearing, and experiencing, circumstances that make you question whether it is even hopeful.’

Hemant Panchal came to the UK from India last year to pursue his masters in management. However, his experience of studying abroad soon turned sour.

Initially, he was able to budget his expenses through a loan and a £350 monthly allowance from his family, but since the rise in the cost of living he is hardly able to make ends meet with the same amount.

‘Before coming to the UK in 2021, I took a study loan from an Indian bank which covered only my tuition fees and my parents decided to cover the remaining cost,’ he says. ‘One year back it sufficient for me to pay my rent, bills and still save up to go around.

‘However, since this year, it is becoming more and more difficult to save. The cost of living crisis has made it difficult for my parents and me to cope.’

When it comes to accommodation, Hemant admits he had to lower his expectations thanks to soaring rent and bills.

‘When I first saw my current room, it hadn’t been cleaned and the oven in the kitchen was not working. The room smelled like mould,’ he remembers. ‘I thought it would be too challenging for me to clean it thoroughly and decided to drop it – but then I realised I could not afford the minimum options I wanted, so had to take it.’

Despite moving in Hemant, is actively on a lookout for new apartments and rooms in his budget, but says that ‘dealing with landlords and rising rents has made it challenging.’

On top of that, he can’t afford to keep his accommodation heated, so spends a lot of time time in the library for warmth. ‘There is a 24 hour library close to the university, and that is where I try to eat my dinner and stay after sunset,’ he explains.

Hemants busy timetable also means the student has little time to cook – but even when he can, food costs make mealtimes difficult. ‘Often I am unable to eat breakfast, since I am cooking and preparing food for the rest of the day. I either eat a big meal once a day or split that into two meals.

‘It has been very difficult and has increased my consumption of cheaper, unhealthier snacks,’ adds Hemant.

‘I do not have the option to go home right now, since I plan to stay and work in the UK. However, with part-time hours and limited funds from my family, it is increasingly difficult to commute to places, or socialise with fellow students. I am missing out on attending workshops or meeting professors in person, and this is impacting my grades as well as my learning.

‘When I decided to study abroad, my expectations were higher than what I am receiving and it’s taking a toll on my mental health.’

It’s a sentiment echoed by fellow student Nina, who believes that the cost of living crisis has made her uncertain about her future as she is handling her finances and emotional well being during such challenging times.

‘I am worried that I will lose sight of my goals,’ she admits. ‘I feel isolated from my coursemates and studies, but if I don’t prioritise my mental health and finances, it makes my future feel all the more uncertain.’

Amazing pictures show how fast the world can change