New spending on skills and services will be given priority in the federal budget in a bid to boost the economic recovery, as Treasurer Josh Frydenberg warns against the use of savings measures to reduce the deficit.

The government is promising measures to help workers rebound from last year’s recession and encourage people to learn new skills, with changes on the way to a $4 billion scheme meant to give younger Australians a job. 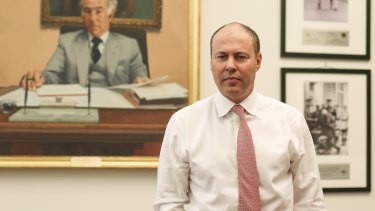 Treasurer Josh Frydenberg says spending on skills and services will be given priority in the federal budget.Credit:Alex Ellinghausen

Treasurer Josh Frydenberg said one of his goals in the May 11 budget would be to prevent workers being “scarred” for years by last year’s recession, signalling help for those who want to retrain for other work.

He was cautious, however, about the prospects for significant improvements in the budget on the scale of the deficit, the growth forecasts for the next four years and the outlook for employment.

“The economy is strengthening, the jobs are coming back but we are still in the middle of a global pandemic and are coming out of the first recession in 30 years,” Mr Frydenberg said.

“Expectations must be realistic. Whether it is growth, employment or the budget bottom line, there is still a long way to go and a lot of ground to make up.”

Mr Frydenberg said the budget would include spending on aged care and new measures on women’s economic security, as well as a focus on skills and jobs after the fall in Australia’s unemployment rate to 5.6 per cent.

Prime Minister Scott Morrison named workforce issues, such as training people with the right skills, as the “single biggest challenge” for the country out of the pandemic.

“We’re backing it up with significant investments and we’ll continue to do so,” Mr Morrison said in Perth on Wednesday.

The government will overhaul one of its biggest policies from last October, the $4 billion JobMaker hiring credit that offers employers up to $200 per week to take on workers aged 35 and under.

Mr Frydenberg claimed last year the scheme would “support” 450,000 jobs but the Australian Financial Review revealed last month it had only created 609 jobs in its first seven weeks.

Treasury forecast a deficit of $213.7 billion last October but the economy has recovered more swiftly than predicted, suggesting a faster move to smaller deficits over the years ahead.

But Mr Frydenberg warned against “austerity” measures to reduce the deficits and said he would offer targeted assistance to industries that need the most help.

“We had a big hole in the economy created by the pandemic, and we’re closing it. We’re closing it fast, but there’s still a way to go.”

Deutsche Bank economists said in a research note on Thursday Australia was the “first and only country” out of 21 advanced economies to have more people in work now than at any point before the coronavirus pandemic.

Labor deputy leader Richard Marles and treasury spokesman Jim Chalmers have warned, however, that the jobs figures for March did not show the impact of the government decision to end the JobKeeper wage subsidy last month.

“There are still close to two million Australians looking for work or more work and there was a net decrease of 21,000 full-time jobs in the labour force data,” they said.

“There is still great uncertainty about the true impact of ripping away the critical lifeline of JobKeeper.

“A real concern is entire sectors, which are doing it extremely tough want greater support now, not when the writing is on the wall and it is too late for them.”

The government says its direct economic support has been worth $251 billion so far, including the JobKeeper wage subsidy, but about $100 billion of this is still to come because the spending was planned over several years. The new spending on May 11 will be on a much smaller scale.

The government’s internal debate on spending will intensify in coming weeks in meetings of federal cabinet and its expenditure review committee, with one factor being the private spending likely to flow from households and companies.

Mr Frydenberg said his goal would be to encourage confidence in the community to tap into about $240 billion in household savings and corporate funds.

“Confidence is going to be the cheapest form of stimulus,” he said.

“With $240 billion on household and business balance sheets, if we can maintain that confidence, then households will continue to spend.

“And businesses will pick up the baton in the economic recovery and invest in higher growth and innovate.”

'General Hospital': Kimberly McCullough Clarifies Her 'Retirement' Remarks — Is a Return Near?